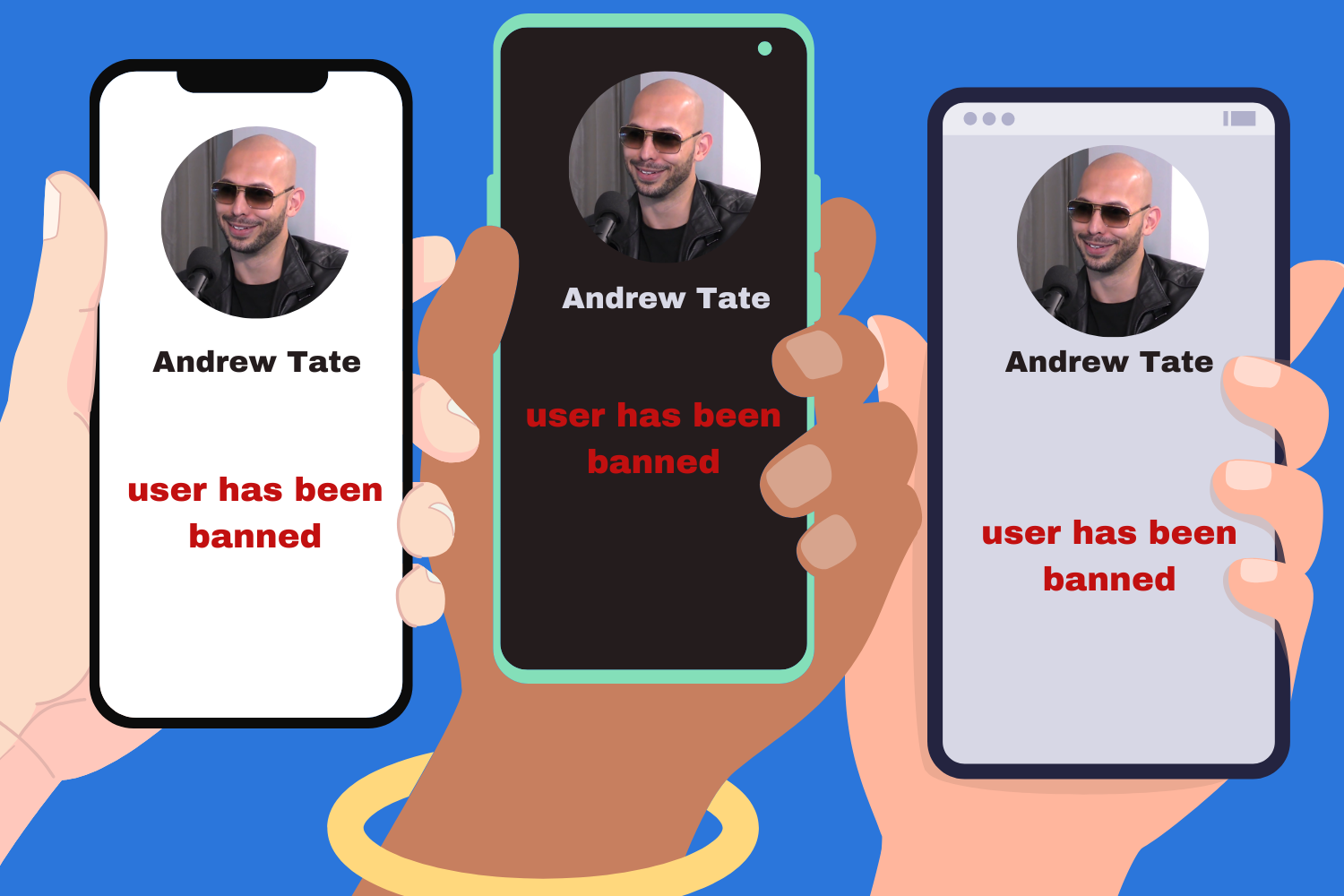 Today, the word controversial is almost synonymous with Andrew Tate. The rise and fall of this anti-feminist influencer have brought new life to some of the U.S.’s most perennially debated topics: freedom of speech, censorship and corporate power. (Graphic by Annika Skorski (Photo used with permission from James English/Wikimedia Commons))

Today, the word controversial is almost synonymous with Andrew Tate. The rise and fall of this anti-feminist influencer have brought new life to some of the U.S.’s most perennially debated topics: freedom of speech, censorship and corporate power.

Andrew Tate is a man many have never heard of, yet his impact on younger generations is felt worldwide. During the months of July and August, the name Andrew Tate was searched more often than Elon Musk, Vladimir Putin and Cristiano Ronaldo, according to Google Trends.

Tate first appeared in the public eye in 2016 when he starred on the British reality TV show “Big Brother” after winning several kickboxing world titles. His attention later shifted to inspirational speaking when he was kicked off “Big Brother” on account of a video of him hitting a woman.

On the surface, Tate appears to be just another disgruntled man ranting on a podcast, recycling an age-old anti-feminism message perpetuating the notion that “women belong in the kitchen.”

If repeating history has taught us anything, it is that hateful individuals possessing a platform to spread their ideology is lethal. Nevertheless, this alpha-male life coach persona became a household name when he began dominating the TikTok For You page this summer, with clips of Tate’s interviews gaining more views than the world population, according to The Guardian.

Tate’s content quickly gained popularity with young boys because it incorporated trends such as hustle culture, a hyper-focused lifestyle of pursuing one’s goals relentlessly, along with weightlifting. Practiced in moderation, these hobbies can empower individuals.

Even so, Tate corrupted these empowering activities with his exclusion of women, shifting focus from finding independence to pressuring men to project physical and financial dominance in their relationships.

Tate’s misrepresentation of hustle culture is especially harmful because he equates monetary gain to individual success. Young followers’ view of what a successful person and success itself looks like may narrow due to Tate stressing the importance of generating self-made wealth through dropshipping and investments in cryptocurrencies.

Demeaning lessons about the minimal role marginalized groups should play in society resulted in Tate being banned from almost all major social media platforms, including Facebook, Instagram, Twitter and TikTok.

Tate was canceled seemingly overnight, almost as quickly as his social media presence skyrocketed. A week after his ban from Meta, Twitter and TikTok followed suit in banning Tate for similar community guideline infractions.

Despite the bans, Tate had amassed 4.7 million Instagram followers in three short months. Many point to his TikTok marketing campaign as a catalyst for his ascent to fame.

Critics label his affiliate marketing program as a multi-level marketing scheme. Tate paid students of his online Hustler’s University a commission to promote his videos under fan accounts on TikTok, amassing 11.6 billion views.

Undoubtedly, the viral circulation of these misogynistic messages on apps with underage audiences is unsettling. However, Tate’s supporters argue that he is the latest victim of cancel culture at its most extreme.

Banning a public figure from social media because their influence is deemed dangerous leads down a slippery slope, especially since their accounts could serve as their primary form of communication. Bearing this in mind, are Meta and Twitter justified in banning this infamous influencer?

Meta and Twitter are obligated to ban Tate to protect their communities, especially their younger audience, from hate speech and bigotry. According to the BBC, viral clips of Tate circulating on social media platforms include him calling women “intrinsically lazy” and saying there is “no such thing as an independent female.” Such misogynistic messages directly violate both Meta and Twitter’s community guidelines.

Tate’s influence overreached that of a typical “influencer” and became a substantial issue when young boys began parroting his abusive words in classrooms. Choosing to expose oneself to Tate’s messages is one thing, but when children relay his messages to their classmates, it is extremely problematic.

When young Tate followers noticeably altered the dynamics in their classrooms, they affected the informal yet crucial education all children receive from their peers and environment about gender roles.

Many educational organizations, such as The Unteachables Academy, a professional development course for teachers, tried to find ways to confront Tate’s ideology in the classroom. Yet these solutions are ultimately ineffective because they fail to address the root cause of the problem.

Children are being indoctrinated by Tate’s trending videos on social media, and only Meta and Twitter have the power to protect the impressionable minds of countless youth across the world. Therefore, the responsibility to ban him is the social media platforms.

The “real man” construct that Tate peddles is crippling to society as a whole because it gives life to the cycle of toxic masculinity.

A “Top G,” as someone Tate describes as feared and respected by all, cannot exist without the oppression and abuse of women and neglect of emotions experienced by males. These harmful practices are glorified by Tate’s flashy lifestyle of cars, expensive accessories and objectified women. Correlating self-worth with wealth and assertion of dominance instills toxic values in the next generation.

Censorship in the media perpetuated by cancel culture is a greater and more imminent threat to society than Tate’s content will ever be as his banning is an example of corporate censorship. Freedom of speech is a beloved and highly debated pillar of U.S. law and democracy.

Ergo, it is up to the discretion of the judicial system to decide, through due process, how to regulate individuals if their speech violates the law. This power does not belong in the hands of large multi-billion dollar companies, such as Meta and Twitter, no matter what their terms and conditions say.

Tate is not the first or last public figure to be banned and effectively silenced by Meta and Twitter. Arguably, the most notable recent banning is Former U.S. President Donald Trump from Instagram, FaceBook and Twitter.

Trump abused his authority and accounts by using them to intentionally mislead the public and state that the 2020 presidential election had been rigged. He also encouraged his supporters to rally, arguably sparking the Jan. 6 attack on the U.S. Capitol. After inciting an attempted coup on the government, Trump received a two-year suspension from Meta, whereas Tate was banned for life.

In addition to claiming censorship powers that the two companies have no elected right to exercise, their punishments are not proportional to those of the U.S. constitution. The First Amendment protects Tates speech, yet Trump’s Tweets are unprotected because he instigated “imminent lawless action,” according to the Supreme Court’s 1969 ruling of Brandenburg v. Ohio.

When large independent companies ban users for charges that would not hold up in a courtroom, they send a dangerous message to the public. In line with history, the practice of consistently eliminating leaders who are accused of having too much influence is rarely part of a free society.

Fifty four percent of Americans are “concerned” that they would be banned from social media or fired from their workplace if they expressed their opinion on social media, according to a Harvard CAPS-Harris Poll.

Making an example of Tate, a public figure known for being unafraid to speak his mind, pressures other users of Twitter and Meta to censor themselves out of fear of being canceled. Despite Tate’s brash and confrontational online presence, Meta and Twitter were not justified in banning him from their social platforms as that right belongs solely to the U.S. government.

The most valuable thing one possesses is their voice. That being said, we must protect our defining perspectives and values by staying aware of subliminal messages from the media we consume, whether it is a favorite influencer or news source. We also have a responsibility to society to not contribute to the suppression of another’s voice to amplify our own.

There is a fine line between protecting the online community and homogenizing it. When Twitter and Meta decided to ban Tate, they crossed that line and violated his freedom of speech.