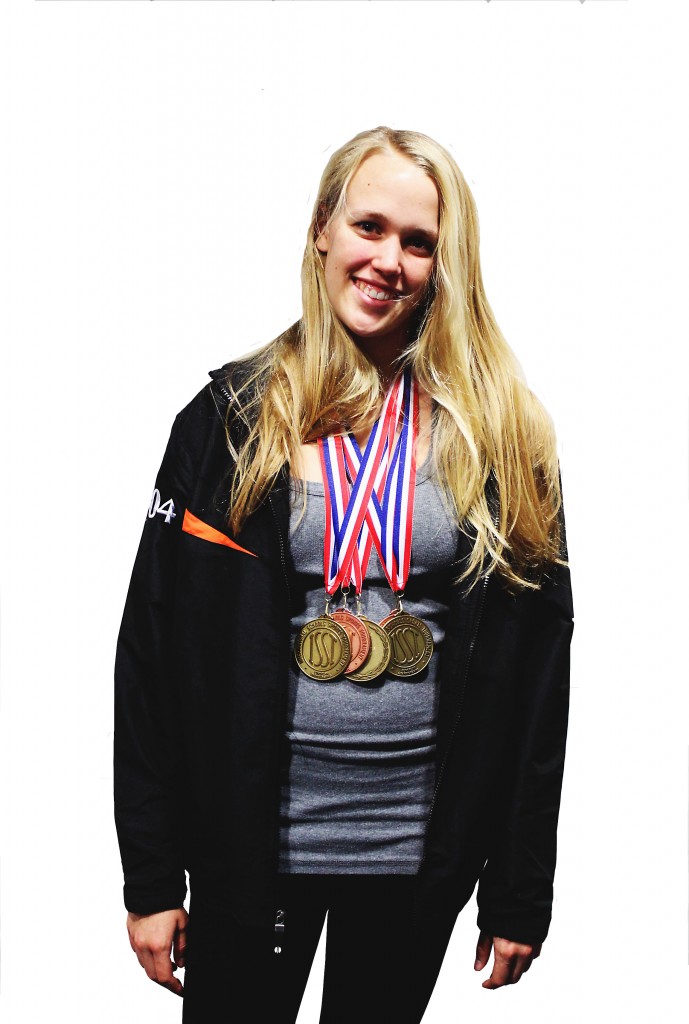 Sophie Rittenhouse (’13) emerged from the pool with a wide grin on her face. Finishing the ISST swimming tournament with a gold in her final race was the best possible end to an extremely successful season. After her junior season of swimming, she could return back to ASL with her head held high. With four medals and two new ISST records, Rittenhouse’s hard work had finally been rewarded.

Rittenhouse has been swimming on the ASL varsity swim team for seven years, and has a history of shattering records and bringing back medals. She excels at backstroke and butterfly; at last year’s ISSTs she competed in the 100 meter butterfly, the 100 meter backstroke, and the 200 meter individual medley, coming in first place for all these races, as well as breaking ISST records for the latter two races.
Another one of ASL’s sporting recruits this year, Rittenhouse received the news that she had been accepted into The College of William and Mary’s Division I swimming program.

College touring was a different process for Rittenhouse compared to that of her friends. She searched for a school with a strong swimming program as well as academic education. “I looked at [the University of] Florida, The Gators, who have a really strong swimming program,” she said. “I talked to the coach on Skype and it seemed ridiculously hard and really serious and I didn’t want [swimming] to be that much of a stress in my life.”

After speaking with the coach at William and Mary, the university her older brother (John Rittenhouse (’10))currently attends, Rittenhouse was more at ease about the college process. “I submitted all my times. [The coach] said they were very good and he would love to have me there,” she said. “The coach was really nice, and he could guarantee me a spot.”

Rittenhouse was convinced by the ease William and Mary would afford her during a usually stressful and prolonged college process.
The assurance of a starting spot at a top swimming program but the journey has been a long and strenuous one for Rittenhouse.

Since the fifth grade, when she joined the Camden Swiss Cottage Swimming Club, Rittenhouse has been swimming competitively. Swimming almost seems to run in the family for Rittenhouse, “My dad is a big swimmer; he used to have a British record for his age group.” All but one of Rittenhouse’s siblings swim competitively as well.

Rittenhouse usually trains between eight and nine times a week. On weekdays, she swims at Swiss Cottage from 6:00 p.m. to 8:45 p.m., and trains with a separate squad over the weekend for three hours at a time. “I have to go every single night, and if I miss a night, then I have to go in the morning which involves waking up at around 5:15 a.m.,” she said.

During the winter season, Rittenhouse has an adjusted schedule in order to balance her additional commitment with the ASL swim team. “I try to swim with ASL once a week. If I can I’ll do twice a week, but usually that doesn’t happen. I’ve only gone once this season so far,” she said.

With so much time spent swimming, Rittenhouse admits that it’s a challenge to adjust her life to that of an average high school student. “Socially, I have to make a lot of different arrangements. It’s really different than it is for other people,” she said. But through years of long hours of training, her teammates have become her close friends. Some of her favorite swimming memories are just that. “Hanging out with all my friends during swim meets and training and becoming really close.”

Even though she rarely practices with the ASL team and swimming is a sport that values individual achievement. “ISSTs are generally so much fun and it’s really like a team meet,” she said.
Going into her final year of ISSTs, Rittenhouse has high hopes for this season. “I want to get some more ISST records, in one or two events, especially in backstroke. I want varsity girls to get 2nd [place] overall,” she said, “I think that’s possible with the team we have this year.”

Rittenhouse has had her share of disappointments, but never regrets her swimming commitments. “I always wonder what it would be like, not swimming, but I don’t regret it at all because it has made the college process so much easier, and I know I’m going to have so much fun in college,” she said. “Even though sometimes I don’t like it, I still enjoy training and racing, and being able to say that I’m really good at something.”