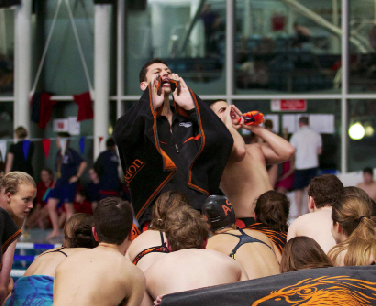 Backstage on the set of Up the Down Staircase, the nervous apprehension regarding an upcoming performance was interrupted by the blare of loud music, continually beating right up until the opening scene, as Lucia Proctor-Bonbright (’14) and Maddie Briggs (’14) prepared for their performances. “My main problem is keeping up my energy during the play after a long day of work, study, along sleep deprivation,” says Proctor-Bonbright, who is playing the lead, and is a formidable presence for most of the play. “I wasn’t sure how to stay energized, but then Maddie turned on some music and we just started dancing. It really helped me to prepare for the play.”

According to WebMD, stage fright is reported to be the number one fear of American adults, , beating out both death and spiders. Not only can dancing help with this, but also athletic performances, depression, decision making and de-stressing. Among students, performers, and athletes in particular, dancing has proven to have a significant effect.

Another actor, Reed Campbell (’14), can attest to the beneficial effects of dancing, not just when it comes to opening night, but throughout the entire acting process. “I just dance all the time, it keeps up my energy. Whenever I’m not acting, I dance. It helps,” he said. Playing and leaping from scene to scene, he masterfully navigates a demanding character.
Music and dancing play an integral role in sports as well. As ISSTs approach, players begin to feel a sense of nervous apprehension, and they need to learn how to constructively use that energy to help their play, not hinder it. Mia Hamm, one of America’s greatest soccer players, was even reported to have vomited before many of her games due to the overwhelming amounts of stress. When everyone is watching, there’s no room for mistakes. How does one prepare for perfection, while maintaining morale and energy in such demanding tasks?

The answer comes easily if you ask the girls soccer team. Erica Rawald (’14) advises that a “dance party is necessary before a game.” Whenever the the team pulls into the parking lot at Canons Park, a deafening tune emanating from the bus signals their arrival. A soccer match is an exhausting test of skill and endurance. To prepare to exert the kind of energy needed in soccer, static stretching simply can’t compete with an upbeat song and accompanying dancing.
The endorphins released when dancing help to cheer up and pump up people when they dance, but dancing goes beyond even that. Studies from Time Out London show that learning choreographed routines can help convergent thinking, coming up with a single “correct” answer, and improvisation dancing can help with creativity and “divergent” thinking, coming up with a lot of ideas. If you improvise with your body through dancing, your mind will follow. To de-stress, an active, cognitive dance can help release us from our worries.

So when teachers say that the best way to keep an active mind during finals is to take breaks by exercising but snacking always seems like a better option, try dancing. When pressure builds up so much it threatens to crush, dancing is a good way to forget anything from college applications to extra-curricular activities.
Sometimes everyone needs a reminder that in the grand scheme of things, every game, every performance and every test will eventually fade into the past, just like your dance moves.