The Box Office or money back again 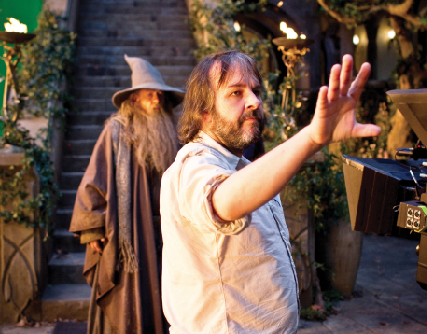 Hollywood’s mantra of ‘quantity over quality’ has gone too far – CULTURE EDITOR MATTHEW BENTLEY says, and The Hobbit is the perfect example.

The Hobbit: An Unexpected Journey is a well–acted film with brilliant cinematography and special effects. But it is bad. Not only was it a boring movie, but also it represents the dark side of Hollywood: “Quantity over quality.” Emotional and beautiful moments are exchanged for cheap references to The Lord of the Rings films, similar to the notorious Star Wars prequels. If anyone couldn’t tell Saruman (Christopher Lee) was going to turn evil, they are a moron. Gandalf’s look, music swelling and Saruman’s “smile” left no subtlety in the film.
Originally published in the 1950s, The Hobbit was a children’s book. It was the simple story of an adventure undertaken by Bilbo Baggins, a hobbit who lives in a hole in the ground. He is taken by 13 dwarves off to retake their ancient home, Erebor. Gandalf the Grey wizard joins them. It was a funny, tragic and brilliant story.

Following its success, J.R.R. Tolkien wrote a sequel series, The Lord of the Rings. In order to do this, he amended aspects of his original book in a second edition to better reflect the dark tones of the later books.

The Lord of the Rings film series was great. The films were not as good as the books, but they were brilliantly acted, the cinematography was beautiful, and they were well–directed. Spanning roughly 2,400 pages, The Lord of the Rings is a long story. With so many details, battles, places and characters, director Peter Jackson and writer Fran Walsh had to cut quite a bit of detail from the films. These movies garnered a number of Academy Awards, were box office successes and set the benchmark for fantasy films.

Then, Jackson decided to try his hand at The Hobbit. I was initially thrilled – it had been my favorite book as a kid, and I love The Lord of the Rings. When I learned that The Hobbit would be split in two, I thought it was fantastic. This would allow for Jackson to include all of the brilliant story, and not have to cut out any characters. It would also give me six hours of The Hobbit to enjoy. The cast list excited me to no end: Martin Freeman, Ian McKellen, Benedict Cumberbatch, Richard Armitage, Andy Serkis, Stephen Fry – I mean, come on! Is there anything better than that? But then, things started to go a bit off. I realized that The Hobbit was shorter than any individual Lord of the Rings book, so how would Jackson fill two movies?

When I heard there would be three movies, I nearly vomited. I realized what was wrong with these movies. It was a blatant attempt to make more money. The fact that Jackson was not only splitting the film in three parts, but also was releasing them each a year apart is appalling. In an interview with Stephen Colbert before the movie was released, Jackson revealed that the second film was cut and finished, saying, “[My editor and I] are the only people who have seen the second film … I managed to get most of it cut before I came [to the Premiere].” This is the greatest abuse of power on the part of Hollywood.

I shall not fault Peter Jackson for this blatant abuse of power. Perhaps it is due to a problem within the system that he is a part of. For years now, the possibility for making money has ruined the movie industry. It started with a couple Katherine Heigl “movies,” which I could endure. Then it became all those films à la Big Mama and Scary Movie: Mindless comedies. I was fine with all of these, because I could ignore them, pretend they did not exist. In fact, I appreciated these films because they helped make studios money in order to fund the projects that I loved. But then the corruption began to spread into areas I cared about. Harry Potter and the Deathly Hallows was divided into two films. The series of Marvel films took two years to produce, even though they were done earlier. Whatever Green Lantern was was produced. Star Wars was re–released in 3D.

Throughout all of this I was getting more and more uncomfortable – what lines could be crossed? But, I could still almost ignore it. I haven’t seen Star Wars in 3D, and I regret seeing Green Lantern. Then, The Hobbit became three movies. I knew that the tumor had metastasized, and even the most sacred of nerdy pastimes had been corrupted.

The problems just continues to get worse. Remember Cloudy with a Chance of Meatballs? Not the lovable children’s picture book, but the forgettable film? That is getting a sequel. 300, the “historical” film which depicts “real” events gets a sequel about Athens because you can money. Jurassic Park is being re–released. We have to watch Hayden Christensen’s brutal performance as Anakin again.

Star Wars is getting three more movies, because apparently, one can never exploit a franchise too much. I was happy with the franchises end, a beautiful song, a dance and Anakin’s (not Christensen’s) ghost waiting with Obi Wan and Yoda was a beautiful finale. It was over and done with, but now they have gone and added on to it to ruin it even further. Harrison Ford’s famous Jack Ryan is being remade. Practically every film coming out is a re–release or an adaptation, done solely for more money.

This expense does not, however, mean the movies have gotten any better. The average budgets of the ten Oscar–nominated Best Picture films is $46 million dollars. Each Hobbit movie cost $150 Million. While The Hobbit may have made more money, it has been widely criticized by critics and mostly ignored by the Academy.

There was no justice either. The Hobbit is breaking box office records left and right and set to break $1 billion in gross. If this was Pavlovian training, the dog would have just destroyed the house and still have gotten the cookie. Studios have learned that if you take a beloved children’s book, and stretch it out, you will make a lot of money. Good for you.
I am saddened that kids are now going to know The Hobbit as three movies, or that next year I will have to specify between An Unexpected Journey, The Desolation of Smaug (tied for worst title with Snakes on a Plane) and There and Back Again. The Hobbit was not just bad, it was awful. Let’s hope this is rock bottom.