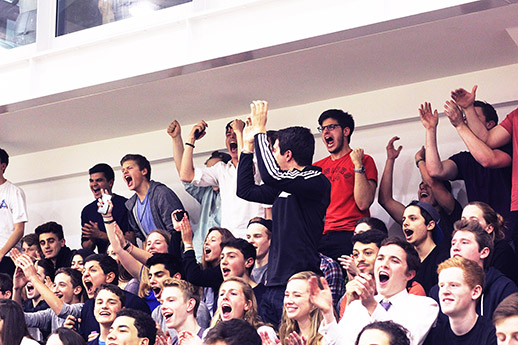 Chants of “Get Out Of London” and boos rang through the Farmer Family Gym on Homecoming night. Aggression and vitriol were evident on the faces of many onlookers in the bleachers.

This hostile reaction was solicited by the actions of an ACS Cobham varsity boys basketball player, who raised his hand to his ear in a provocative gesture after converting two free throws at a crucial point in the January 10 game against ASL. The two points earned by the free throws all but sealed the game for Cobham to culminate a fourth-quarter comeback.

Complaints concerning the boisterous support were raised to Athletic Director Sandy Lloyd following the Cobham game. “Since that Cobham game, a lot of people are very upset – a lot of parents, a lot of faculty. Everyone in the whole community is very concerned at the behavior [following the two free throws],” she said.

Such complaints are not a rarity at ASL. The support in the unofficial High School student section has always been a contentious issue.

Home basketball games are either played on Wednesdays or Fridays, and, naturally, Friday games draw in a bigger crowd, estimated to reach between 550 and 600 people by Dean of Students and Varsity Boys Basketball Coach Joe Chodl.

Chodl views the Friday basketball games as a prime opportunity to build ASL’s strength in community. “It is more than just the support for the team, this is a huge community-builder,” he said.

“I love that there are little kids standing on the sideline wanting to high five the guys as they run out. The cheerleaders are painting their faces and putting ASL on their face. The dance team bring their own energy to the crowd. [Friday games] are huge for the community. It’s more than basketball,” Chodl continued.

Social Studies Teacher Sana Shafqat feels that the support in the student section undermines the fun atmosphere Chodl describes. Shafqat is particularly affronted by the habit supporters have gotten into of shushing before an opposition player shoots a free throw. “The shushing borders on being rude and being belligerent,” she said.

While Chodl views the support as mostly positive, he recognizes that it can cross the line of positivity and tread into unacceptable behavior. “I think for the most part, the fans do a good job of keeping their cheering clean and keeping it positive. Sometimes cheering can go over an edge, and maybe not be as positive as it should be,” he said.

Patrick Collins (’14), a former varsity basketball player who now attends all Friday games, disagrees with both Chodl and Shafqat. Collins calls on his own experience to formulate his opinion on the matter. “When I was playing you couldn’t hear everything but you hear noise and you know its positive because you’re [at] home,” he said.

Collins also believes that the support generates a hostile environment are unfounded. “I don’t think it’s a fair complaint because all of the noise generated is directed at the home team. None of it is directed at other players on the other team and if it is, it’s never vulgar or offensive. I don’t see why you shouldn’t be able to hear negative things about what you’re doing and still be able to continue on,” he said. “It’s part of playing, it’s the reason you have stands, so you get support which gives you an advantage.”

Lloyd believes there has been an improvement in supporters’ behavior in recent years, however. “A few years ago nobody would come on a Friday because the behavior was so bad and we’ve managed to have a lot of Friday games this year,” she said.

This year ASL has played Friday games against St. Johns, Cobham and Lakenheath, winning all of those games except for the Cobham game. There is another Friday game to come, when ASL will face International School of Brussels on February 28.

Despite the concerns raised over the support, Lloyd is reluctant to discipline individuals for their behavior. “I can’t imagine taking someone in front of the Student-Faculty Discipline Board (SFDB) for booing.” Lloyd said, “It’d have to be if profanity was involved or if it was something severe. I think if I look at the fans and say, ‘Knock it off,’ if something inappropriate is said, there’s enough respect for them to listen.”

Shafqat, however, would support any disciplinary action taken against particularly rowdy fans. “Children should know there are consequences to their behavior,” she said. If this behavior remains unpunished, Shafqat feels that there is no reason for them to stop.

As a High School teacher, Shafqat worries about teachers and other community members’ perception of the support. “For others to think the behavior [of the crowd] is representative of the High School, it disheartens me,” she said.

Regardless of all its faults and the complaints it receives, Chodl still loves the home support. “I love the support. We have a home court advantage. I don’t think anybody in the ISST gets a crowd like we get a crowd and for a player it just has a massive impact,” he said.