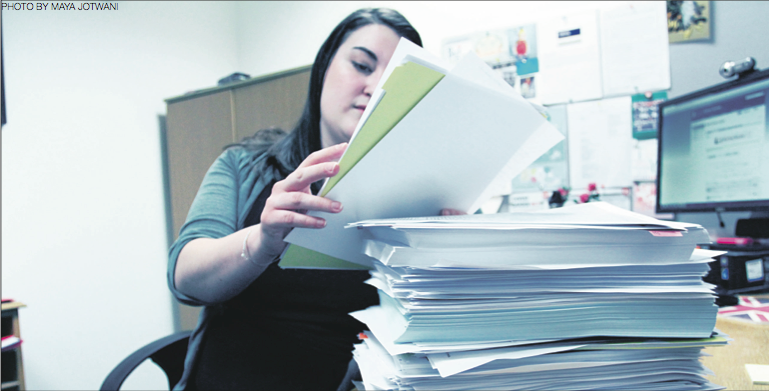 hen Recruitment Manager Megan Gomm opens her e-mail inbox on a Monday morning, more than 200 job applications await her. “[ASL] is lucky in the sense that the jobs here are absolutely in high demand, meaning we see really strong candidates for every position,” she said.

Gomm is the first point of entry for candidates in the ASL hiring process. Her responsibilities include viewing all of the résumés and checking references to whittle down the pool of candidates. Finally, Gomm gives Head of School Coreen Hester and the divisional principals “a stack of candidates that I think they would be interested in seeing.”

As well as a résumé and an online application form, candidates must send a video of them teaching and meet twice for interviewing. This 10-to-15 minute video clip gives Gomm the opportunity to “see them in the classroom and see how they interact with other students and colleagues.” Ideally, Gomm would have the candidate teach a class at ASL, but “because we do so much overseas recruiting, it usually isn’t possible to meet everyone we hire in person,” she said.

First year Social Studies Teacher Howie Powers agrees that the process is very thorough. “They had even called the Head of School and Head of Upper School at my former school,” he said.

Hester classifies positions into three levels within the school. “There are three levels: senior administration, associates, and faculty and staff,” she said. For any job, there are anywhere from 50 to 100 applications per job, and the school can receive around 1,000 total applications for jobs each year.

One issue that Hester has tried to address is awareness of diversity in the applicant pool for all levels of jobs. Diversity is something heavily stressed at ASL and Hester also makes it a priority when hiring for any position at ASL. Hester estimates there are around 30 new jobs each year at ASL, and believes that with so many opportunities, a diverse pool of applicants should be considered. “You are never going to hire a more diverse candidate if you do not have a more diverse pool,” Hester said.

This year, ASL has reached out to two minority firms who provided them with applicants for positions. ASL reaches out to these firms with any possible job opportunities, and in return the firm send them minority applicants.

Hester has also noticed that the ASL administration is “pretty white” but believes it is a situation which has evolved without a real explanation or thought. “In the best of all worlds, we would make sure that there is diversity in all categories of employees,” Hester said. “We should have more people of diversity… it can be an accent, sometimes it is color or ethnicity, and sometimes it is gender.”

Although the recruitment team is flooded with applications, the team still looks for prospective candidates by sending job descriptions to overseas recruiting agencies and even advertising in British newspapers such as The Guardian. “I absolutely feel the application process is thorough and it is something I pride myself on,” Gomm said. “I could reduce the number of applications we receive by not advertising in so many places, but I want to cast a wide net and get the greatest teachers out there to see my advertisements.”

For Gomm, the process does not end after the finalists for a position are selected. Once these finalists have been established, Gomm coordinates their schedules. “I will set up interviews for a candidate, help them book their flights and their hotels and act as a sort of chaperone for them,” she said.

When Dariush Yazdanpanah (’15) heard that certain members of the Student Council (StuCo) would be interviewing candidates for the new Director of Student Life, he did not hesitate to volunteer for the committee. Yazdanpanah has previous experience as a student voice in the hiring process of  the High School Principal position, last year. “From a student perspective, I try to imagine how well other students could connect with the personality of the candidate. For me the personality of the candidate is very key,” Yazdanpanah said. “I don’t think I’m in a position to scrutinize someone’s CV. I like to judge the candidate based on their personality and try to predict how well they can  connect with the students.”

Four members of both the Student Council and Student-Faculty Disciplinary Board (SFDB) formed a committee that was involved in meeting with potential candidates for the new Director of Student Life, a role that will replace the outgoing Dean of Students Joe Chodl when he departs at the end of the year. Yazdanpanah sees StuCo’s involvement as necessary for positions at this level because they are “trusted” by the administration. “This shows how highly the administration values us,” he said.

Courtney Welch (’16), a member of the SFDB, agrees with Yazdanpanah about the necessity of student involvement within the hiring process for positions like Director of Student Life. “I think that the administration values what we think of each candidate because it is important that we, as students, can personally view ourselves interacting with them on a regular basis,” Welch said.

With Welch’s role on SFDB, one element that she looked for when speaking with each of the candidates was their ability to act “as a disciplinarian, yet also being able to form healthy relationships with students.”

Welch believes that this student involvement has worked well, and was pleased to have the opportunity to be involved. “I think this process is an example of how the administration respects student opinion. It is important that we are able to help give feedback as to whom we believe would best fit into the ASL community and I don’t think there is any better way to know that this can be done than involving the students,” Welch said.

While meeting with organizations such as StuCo and SFDB has been beneficial for senior administration and associate positions, Hester also believes that there should be a stronger voice for faculty and staff selection. “The new choral director is a teacher, yet we flew three candidates in because it was such a well-regarded position,” Hester said.

After a two-year period where, under U.K. employment regulations, the school can dismiss a teacher without a detailed explanation, the school must follow strict protocol and undergo a review process to dismiss a faculty member. Hester knows that while these regulations are strict, “it is all to protect teachers, not the school,” she said. However, at any given time if the administration feels that someone is not performing “up to snuff,” they will be involved in a performance management policy.

As a teacher, Powers is aware of the international employment laws. “[There is a] very deliberate and rigorous evaluation process for first and second-year teachers,” Powers said. “After two years, and especially one year, according to British law, it is very difficult and expensive to end a faculty’s job.”

With 28 new teachers this year, ASL continues to be a place with plenty of new faces each August. ASL attracts candidates from the U.S., looking for an opportunity to live in London, and international candidates drawn to ASL’s stellar reputation. Gomm believes that the prestige of the school is represented by the sheer amount of applications she receives. “The jobs here are absolutely in high demand and we are very lucky in that sense,” Gomm said. “ASL is a great place for teachers because ASL has a good reputation.”