ASL swim gets off to a good start 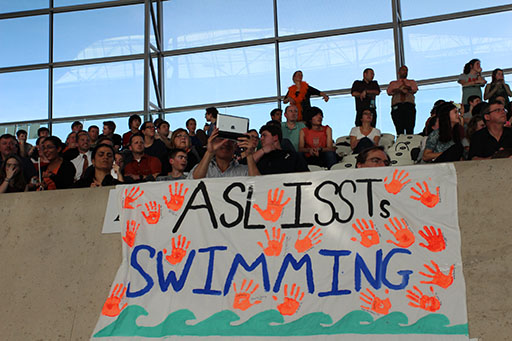 On day 1 of swim ISSTs, the London Aquatics Centre was filled with a strong high-school contingent who were on hand to witness a quick start for the ASL team.

Amid chants of “ASL” from the stands, swim coach Rod Anderson exclaimed, “the crowd is very excited, I thinks it’s helping to spur us on.”

With a gold medal and ISST record under his belt, the water still dripping from his chest, Will Rittenhouse (’14) broke out a smile. “I came into ISSTs trying to rewrite the record books,” Rittenhouse said. “I’m swimming three events and going for the record  for all three so it’s a good start.”

Preceding Rittenhouse’s record-breaking swim, ASL’s first gold of the day came in the form of a personal milestone. Olivia Halsted (’17) won her first gold as a member of the team. “It felt really good,” she said. “[It is a goal] I’ve been working towards for three years.”

Swimming at the London Aquatics Centre, home to the swimming and diving events during the London 2012 Olympics, was an experience that few swimmers are likely to forget. “We walked in and shed a few tears,” Emily Gossett (’16) said. “It’s beyond real.”

Charlie Hennessy (’14) attending his last ISSTs at the Olympic pool said, “I couldn’t imagine a better venue to end my swimming career.”

Tom Daley, a British Olympic Diver, was also on hand to witness some of the day’s events, taking some time out of his diving practice to meet a few of the contestants.