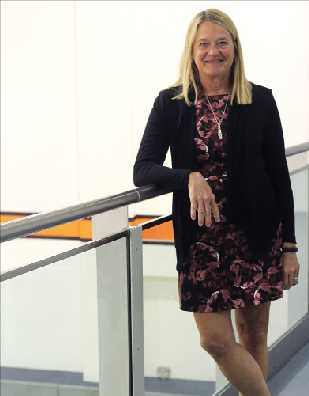 After five years of working in the Athletics department, Athletic Director Sandy Lloyd will be leaving ASL following the culmination of the 2013-2014 school year. Lloyd admits she originally was not looking to leave ASL, but she was unable to turn down the incredible opportunity presented by the Stamford American International School (SAIS) in Singapore to continue her role as Athletic Director.

Since Lloyd’s appointment in 2009, substantial improvements have been made within the Athletics department. Lloyd believes there have been major strides in the quality of the coaching staff as well as the girls programs during her tenure at ASL.

“When I arrived, the turnout for some of the girls programs was not very good and now we’re in a really good place for all of our programs, for both genders,” said Lloyd.

Part of Lloyd’s main focus during her time as Athletics Director was to improve the quality and consistency of some the coaching staff. “It was very inconsistent when I got here. Some programs had really quality people while other teams and programs had coaches that had minimal backgrounds,” Lloyd said. Arranging assistant coaches to maximize opportunities for students to get involved club programs, has always been a priority for Lloyd too.

Currently, Lloyd oversees the athletic program throughout grades 5-12, providing coaches, facilities, equipment and other aspects pertaining to all those programs. Lloyd admits that her position at SAIS will differ greatly, offering a disparate array of opportunities from those available at ASL.

“It’s going to be a very different situation in Singapore. It’s a new school and I’ve been brought in to head up the P.E. and Athletic Program and basically build a program from scratch. Right now they have seven programs in seven sports, but we’re going to focus on expanding those programs and getting them a very competitive schedule with highly competent coaches. That’s my charge and I’m really excited about creating something,” Lloyd said.

Despite implementing numerous elements into the Athletics program, Lloyd acknowledges an athletics department as a perpetual “work in progress.” Whether it’s finding new suitable coaching staff or organizing a variety of different schools to play against, Lloyd admits that there is always room for improvement.

“You can never sit back and just say things are great and play the same schools all the time. You just really have to always focus on how we can make it better for our kids,” Lloyd said.

Lloyd continues to arrange competitive matches against British schools as well as expanding travel opportunities for athletic programs and teams. Lloyd has managed to establish connections with US colleges and facilitate the recruitment of several of ASL’ athletes.

“My goal has always been to provide the best opportunity for our student athletes in every possible way. We’re all one big family and we need to support each other and do everything we can do help ASL excel,” Lloyd said.

Although Canons Park offers facilities unparalleled to any other venues at ISST, Lloyd acknowledges the extensive strain the long travelling hours have on both athletes and coaches. “Canons is wonderful but it’s a ways away. It’s a challenge in terms of travel but it’s worth it”, Lloyd said.

Citing the Varsity Basketball Teams visit to Canons Park to watch the Varsity Rugby Game as an example, Lloyd is impressed by the cooperation and solidarity amongst teams at ASL.

Optimistic towards the future, Lloyd is convinced the ASL Athletics program will continue to progress from it’s current position. “I think we’re in a really good place and I’m sure it’s going to continue. We’re highly respected and everybody looks to us and wants to come to London because the two best schools in terms of competition, ACS Cobham and ASL, are both here. In terms of leaving, I’m going to miss the people here the most, including the coaches, the students and other teachers in the school. In my opinion that’s the best part and Canons Park and the travelling with the teams. Everybody has been really fantastic and everybody wants to help out with the program.”

Replacing Lloyd as Interim Athletic Director is current Assistant Athletic Director, John Farmer. Farmer views the new Interim role as an opportunity for growth as well as a chance to implement his own ideas and philosophy into the Athletics program.

“I love the Middle School and I love doing Middle School Sports, but obviously it’s a whole different situation with High School sports and the travel that’s involved, and I want to be a part of it,” Farmer said.

Currently, Farmer is in charge of running and administering the Middle School Athletics programs and activities. Working with coaches and students, Farmer coordinates scheduling as well as ensuring that all Middle School programs take place.