This man is building a telescope 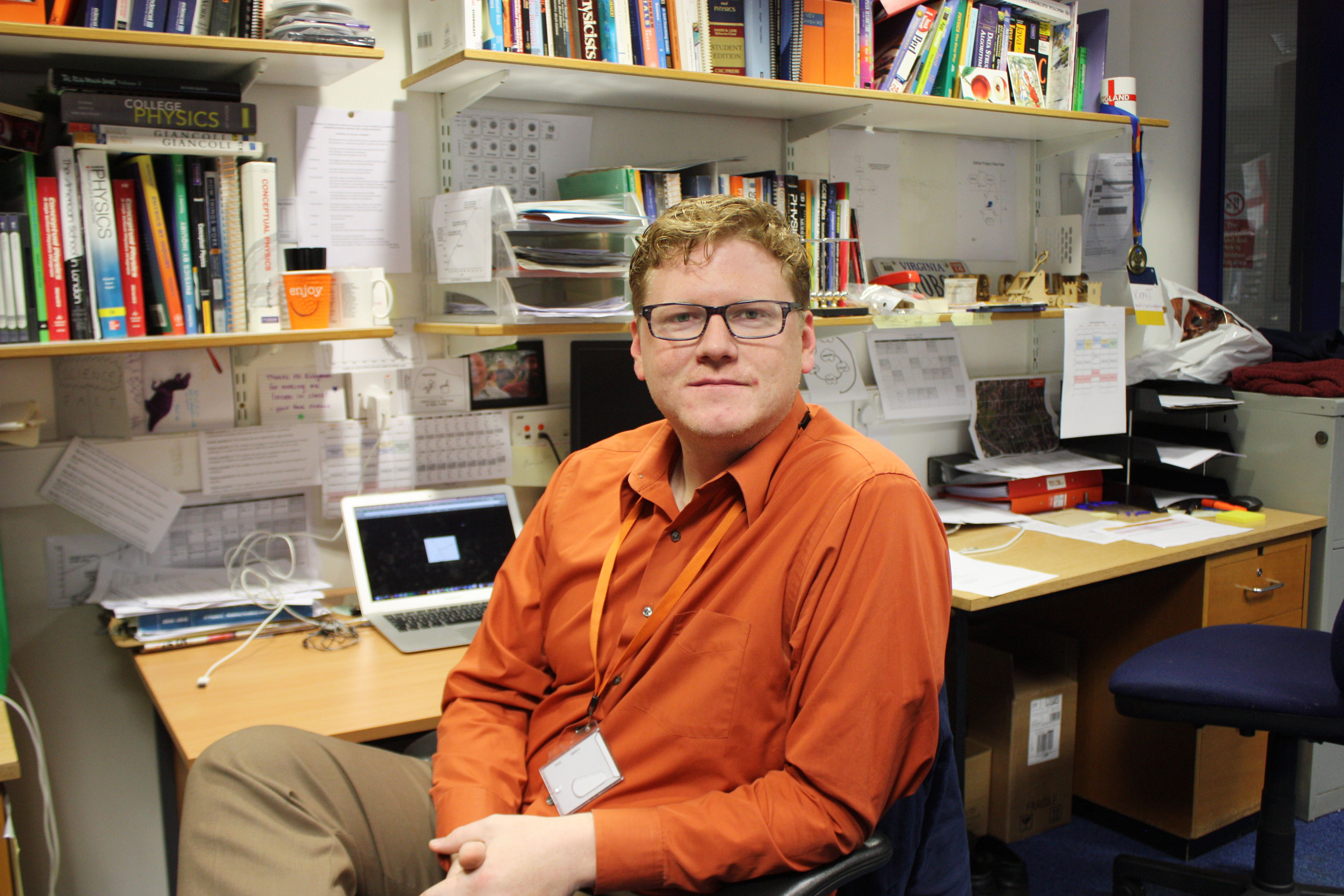 When you ask Science Teacher Andrew Ringham if he always wanted to be a teacher, he is quick to respond. “Never. Not at all. I went into college thinking I wanted to be a physicist. I had it all planned out, I would go get a PhD… I was going to be a researching scientist,” Ringham said. “I was sure about that when I was 18.”

But then, midway through his senior year of college, at the University of Minnesota, something changed.

As his college years wound down, Ringham was working diligently on his physics thesis. He even had his own little lab, “literally only the size of this table,” in the depths of the science building. “I spent so much time down there,” he said. “I never saw daylight, I was underground all the time and I was just sitting in this closet, by myself, working on this lab.”

At the same time, above ground, Ringham worked as a teaching assistant for some intro level physics courses at his university, which he enjoyed immensely. “I was blowing off my research halfway through my senior year… in order to go meet with students outside of class and help them with their homework.” he said. “I was enjoying that way more than actually doing my  research so I thought to myself, maybe I ought to try teaching instead… And that’s what I did. I found a job teaching physics in Indianapolis and the rest is history.”

Ringham’s experience, his lonely lab in the sub-basement and his subsequent discovery of his love for teaching runs almost parallel to the story of how he ended up in London. Before moving abroad he worked for the New Tech Network, an U.S. educational organization which runs around 140 secondary schools, predicated on project learning. Three years ago, Ringham was hired to expand the online program, teaching two classes of astronomy and physics and facilitating interaction between students “from California to New York.”

While he enjoyed his experience, Ringham again grappled with the cramped and lonely feelings he had felt in his little lab. “It was pretty lonely because I just kind of sat in my house,” he said. “I had a dog, but the only people I really saw all day were through the computer.” He missed the ambience of a real, physical classroom.

Now in his second year at ASL, Ringham teaches AP Physics 1, AP Physics 2 and AP Physics C, considered by many as some of the school’s most difficult classes. At first, Ringham found the transition difficult, moving to a school that was “definitely a different kind of environment.” But, once he figured out “the type of culture present at ASL,” he was able to find his role.

His love for London certainly didn’t hurt his transition. “Personally, I love London. I love that there is so much to do in all these different corners of the city that you wouldn’t necessarily know existed unless you were there,” he said. “I love the energy.”

Although his goal was never to be a teacher, when you ask Ringham what drives him to continue teaching, he is again quick to respond. “There’s a moment when a student starts to really connect their 16 years of real experience and has a certain realization – matching the things that they do everyday without thinking about, to the really abstract, technical, conceptualization[s],” he said. “There is always this big moment where they put the two together and it is truly incredible to watch.”

On Wednesday nights every other week, if you are looking for Science Teachers Andrew Ringham and David Partridge, you won’t be able to find them – they are busy building a telescope, from scratch.

About seven months ago, Ringham and Partridge joined a London-based community group centered around creating telescopes and embarked on the process of making their own.

While there is no definite timeline for the completion of the telescope, Ringham reckons they have a long way to go. “We chose a pretty ambitious project to start with,” he said. “Most people, when they start off, build a telescope with a much smaller mirror, like four inches or  six inches. Ours is 12 inches, so it’s a lot of glass you have to grind away.”

The process begins with a 300-millimeter thick piece of glass (in their case, 12 inches in diameter) and a lengthy grinding operation. “You have to grind the glass away so instead of being flat on top, it has that spherical indentation in it,” Ringham said. “Then, the light coming in will bounce off that mirror, the mirror will focus it and we can look at that point and see the magnified image.”

Meeting with the group every other Wednesday for the past seven months, Partridge and Ringham have carried out the grinding process using small metal filings.

Working alongside Ringham, Partridge sees the telescope as fufillment of a “boyhood dream for both of us.”

The only difference? “His boyhood was a lot closer than mine,” Patridge joked. “It’s great to have a young, enthusiastic teacher, like [Ringham] to work with.”

Ringham estimates that it will be about six more months before the piece of pyrex is ready to be aluminized and the rest of the telescope ready to be built. “We keep joking that it’s never really going to happen,” Ringham said.

But will it all be worth it? The two have also joked about that. “Because telescopes are pretty expensive to buy and we were like, ‘ok sure, we can buy this piece of glass…’” Ringham said. “But then, by the time we actually account for all the costs and going to the [community group] for such a long time, it would have probably been cheaper to actually just buy a telescope.”