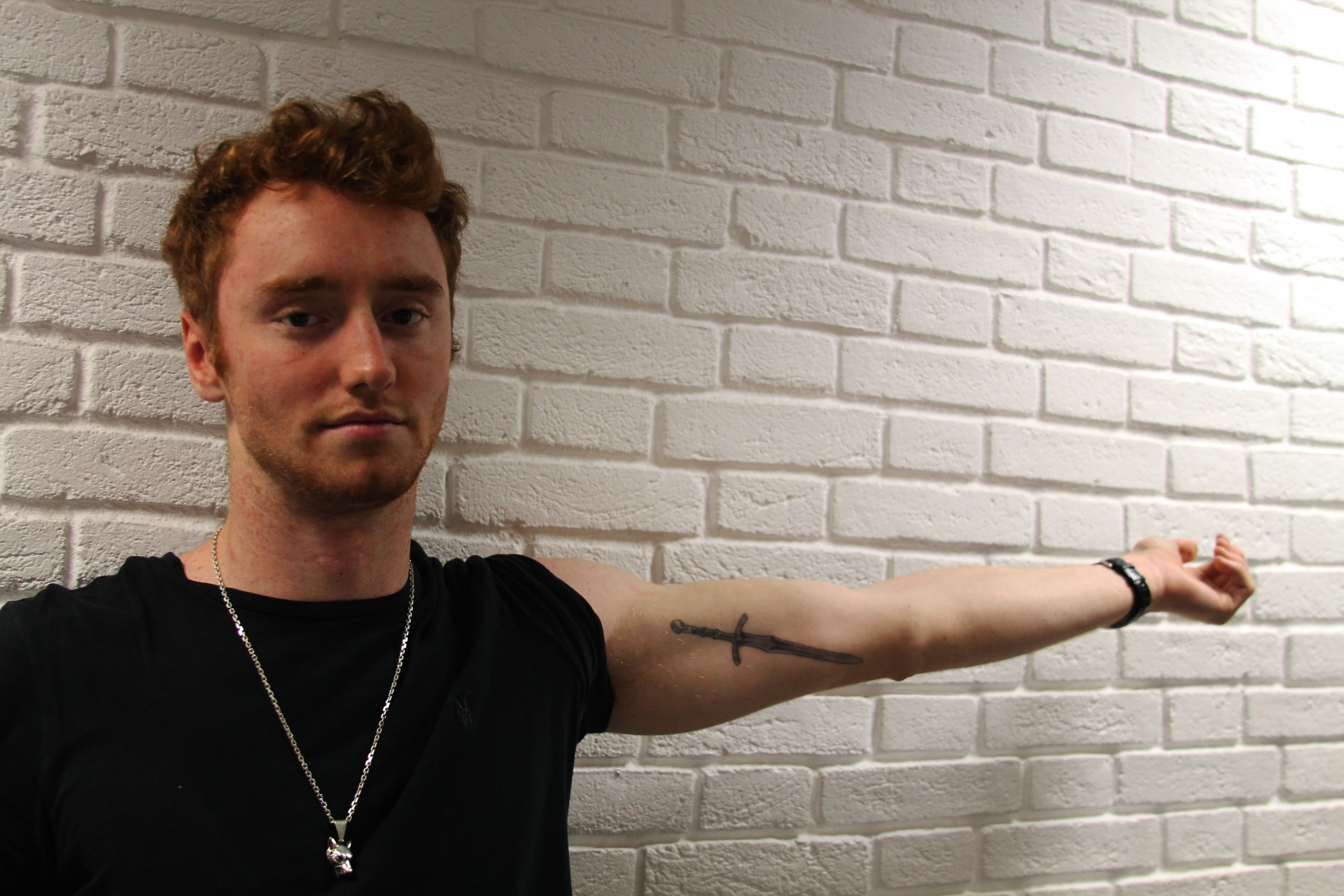 It was English Teacher Mark Mazzenga’s 18th birthday, and he wanted to complete every rite of passage that came along with it: driving a car, going to college and getting pierced and tattooed.

This would be his second piercing and first tattoo, his first piercing being when he was 15. “I wanted to do something different,” Mazzenga said. “I went to an all boys Catholic school, and you weren’t allowed to do lots of things; get piercings, have long hair, chew gum at least during the school hours.”

Since he wasn’t allowed to have piercings, Mazzenga used to take out his earring and attach it to the back of his uniform-issued tie. “When the school bell rang I would put it back [in my ear].”

When turning 18, Mazzenga knew what he wanted for his first tattoo. “The symbol was the ‘ohm,’ the sound made during meditation. It’s a yogic symbol, but at the time I didn’t think of it like that. I was off to college that week, and I needed a little peace and tranquility and it gave me that. [I thought] it was symbolic of this new stage in life.”

Ally Negasheva (’17) received her first tattoo this year. The tattoo is a symbol of strength, and was meant to give her courage for the future and the upcoming junior year. Negasheva always knew she wanted a tattoo. She had gotten henna that lasted for weeks to make sure she wouldn’t get bored of the ink. Now, with her tattoo placed on the inside of her wrist she feels strength for the future.

On the contrary to Mazzenga, Negasheva doesn’t feel that she has to hide her tattoos. Instead, she proudly rolls up her sleeve to show the four connected spirals. Although receiving positive reactions from her friends was a plus, she didn’t feel she needed validation from them.

“I’ve always wanted a tattoo – I don’t think you should do it for someone else. I did it for me, and I don’t care about people’s judgement,” Negasheva said.

Similarly to Negasheva, Fox Abrahams (’16) received his first tattoo about a month ago. The tattoo, a design similar to the Scottish Broad Sword, is in commemoration of Abrahams’ Scottish heritage and is “an idea of strength and power in a time of difficulty”.

“I knew everything was going to change in the next few years,” comments Abrahams, “So I wanted something on me that would stay permanent.”

Originally, it was Abrahams’ sister who encouraged him to get the tattoo, but his father was “less than impressed” with his choice. Abrahams knew about his father’s opinion on the matter, but decided to continue through the process because he wanted to do something for himself, something that would hopefully make him remember how he felt when getting the tattoo.

Lily Badian’s (’16) bright blue hair can’t be missed in the hallways. When asked about why she started dying her hair she said, “I’m still young right now. I figured I’d do something while I had the chance.” She’s had pink, green, grey, and many years ago, as she describes, an “awful orange color.” Not only does Badian have vivid blue hair, but she also has multiple piercings, including a belly button and septum.

Badian’s parents had always been relaxed about the topic of dying her hair, what with her mom having purple hair and her dad “an artsy guy,” Badian has never felt she had to be scared about dying her hair. Although her parents’ liberal attitude towards dying her hair was a norm in her life, Badian took notice to the very few kids at ASL who had forms of body modification.

“I think the kids at this school are a bit more conservative, they’re liberal in their ideals and political views for the most part but because of their socio-economic status, they feel like they have to present themselves in a stereotypically proper way,” Badian said.

Badian mentioned that she knew of people who wanted to get tattoos and piercings but they knew their parents wouldn’t approve. Referring back to the ‘stereotypical proper way to look’, Badian explains that in the present, it’s hard to achieve ‘normal’ jobs because tattoos and piercings are surrounded by the false idea of crime and gang violence.

There are unspoken rules or codes of society in relation to body modification and professionalism. “These ‘rules’ were written long ago, and sometimes we become indoctrinated [into these rules],” Mazzenga said.

Many have commented on the stigma surrounding the different forms of body modification. “Absolutely [there’s a stigma], gangs and those who commit crimes are associated with tattoos,” Abrahams said.

As Abrahams and Badian explained, many of the judgement are misguided, they are misconstrued in the ideas surrounding body modification. “There’s a certain beauty if you look long enough,” Abrahams said.