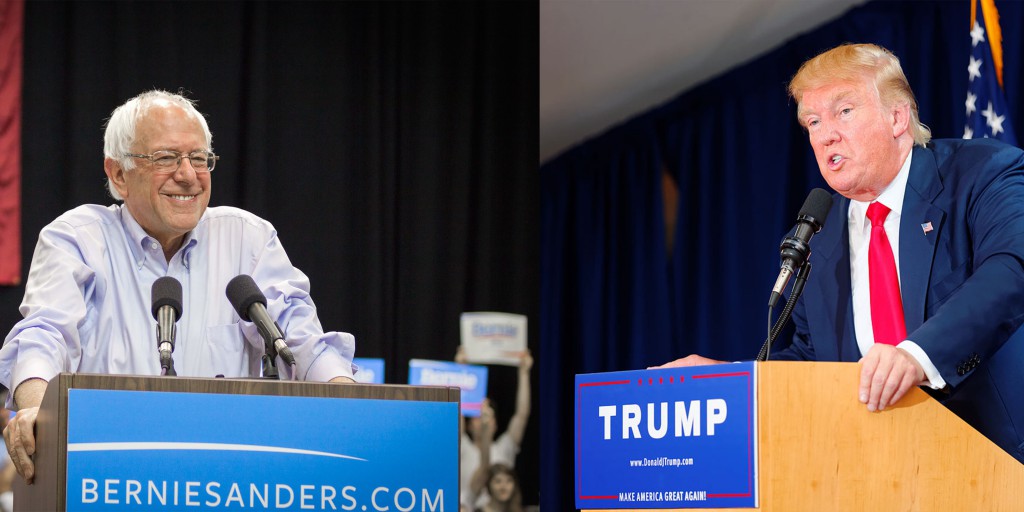 Trump is far too – for lack of a better word – Trump-ish; in a nation built on the foundation of immigration and where just over 30 percent of the population is of a minority group, a candidate who labels an entire ethnic group “rapists” or calls for “Muslim identity cards” simply isn’t viable. Trump’s campaign often makes me wonder whether or not he passed Government 101. Then I remember he literally hasn’t, and it begins to make at least a little more sense.

In the end, whether it is the racist, unconstitutional blunders of Trump or the commendable, but unrealistic, anti-establishment nature of Sanders’ campaign, the difference between the candidates is negligible. A vote for one is as good as a vote for the other.

Yes, the two candidates are changing the game of politics, each in their own – and depending where you fall politically – shocking ways. Yet, the question of whether or not they are feasible candidates for our next president, is important to consider. And the answer is no.

At its very core, politics is about creating alliances and coalitions. Look no further than the history of our two-party political system. During their respective creations, the Democratic party was a coalition between Northeastern progressives and Southern evangelicals, while business owners and the farm belt came together to form the G.O.P.

To be a successful leader, let alone President of the United States, a certain level of compromise is imperative. Yet, these candidates stigmatise compromise. Sanders and Trump aren’t politicians in the traditional sense – they are mouth pieces for self-expression. They allow supporters to make a statement, demand respect and express anger or resentment towards establishment. While compromising with other politicians is a necessary skill, resisting establishment is the very idea they have built their campaigns on.

Politically speaking, both embody an idea once coined by Abraham Lincoln as a government, “by, of and for the people.” Yet, today’s populism has Lincoln rolling in his grave. Today, the movement is decidedly more suspicious of government, and the bargaining and compromise that surround democratic governance.

While the two candidates couldn’t be more culturally different, their policies – at least at this point in their campaigns – are awfully similar when you take a closer look. “What right-wing people in this country would love is an open-border policy,” Sanders said recently in an interview with National Review. “Bring in all kinds of people, work for $2 or $3 an hour… I don’t believe in that.”

In a similar vein, Trump’s immigration plan, at least on paper, also stresses the protection of domestic producers, “put[ting] the needs of working people first — not wealthy globe-trotting donors.”

The two are eerily similar. Sanders unrepentantly slams modern capitalism and vows to transform the country by providing security for domestic jobs. Trump, with decidedly left-wing sentiment, also vows to protect domestic jobs. Yet, instead of fighting international trade legislation like Sanders – although Trump also opposes the Trans-Pacific Partnership (TPP) – immigration is Trump’s battleground. Trump’s plan to “build a wall” and the rest of his suspect immigration proposals (like deporting all 11 million illegal immigrants and then bringing back the “good ones”) are pitched as ways to conserve American jobs.

In media comments, Trump has gone as far as to affirm the little daylight between him and Sanders when it comes to trade legislation, while Sanders has praised Trump’s view on single-payer health care.

The movements of Trump and Sanders are easy to understand; people across the country are convinced that politics are broken. They both harken to anti-establishment ideas and both pledge to take steps to reform the system. Yet, when it comes to real, tangible change, the two candidates stand for ideas so radical, that they lack the power of legitimate political reform.

When you vote for Sanders, or when you vote for Trump, you aren’t voting for legislation or policy, or an ability to lead. You are voting for their willingness to articulate the feelings of the ordinary and to say what politicians often shy away from. Great in theory, but in practice a misguided sense of surrealism. A demagogue or revolutionary, do not an institutional change make.