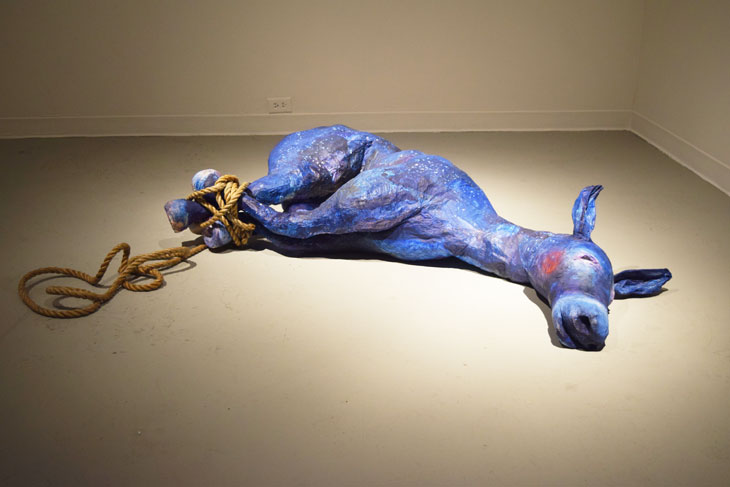 I find myself frequenting the Saatchi Gallery less and less lately. While free art is always nice, the gallery’s reputation is becoming more about the Instagram posts taken there, rather than the art itself. Anyone who has been knows they are guilty of this, myself included.

When the Saatchi Gallery first opened its doors to the world of Champagne Life, my first reaction was sheer excitement. The exhibition features 14 female artists, the first of its kind at Saatchi. Upon further research, this was quickly reversed, as I questioned  owner Charles Saatchi’s intention with his decision to only display the work of female artists. Was it a message of female empowerment, or a simple feminist statement?

While Saatchi had the right idea to express opinions of femininity through art, I disagree with the way in which he did so. Art is the perfect medium to express opinions on gender roles and empowerment, yet instead he attempted to use the artists genders to do so, taking away from the value of the art. Exemplifying the fact that all the artists are in fact female takes away from the art, as no other theme is apparent.

The only repetition within the exhibition is incoordination. As large scale paintings of elderly people by Jelena Bulajic are accompanied by eerie wax dolls, I struggle to see the stylistic layout choice.

In addition to the layout, the conceptual interpretation of the pieces also ranges. Exploring the concept of how media has influenced modern art, artist Julia Wachtel’s pieces reflect this idea. Titled Champagne Life, the source of the exhibition’s name, Wachtel’s main piece is an inverted large scale photo of Kim Kardashian and Kanye West, accompanied by a painting of Minnie Mouse.

Yet, in another room, the pieces explored completely different ideas. A paper maché donkey lays on the ground, titled Jerusalem Donkey by Mia Feuer. Once explained in the exhibition pamphlet, the piece’s intention was clear. The idea behind the donkey represented Draconian rule over Palestine, such as the prohibition of motor vehicles, forcing the use of donkeys. However, staring at a blue donkey at first only created more questions than answers.

The blue donkey was accompanied by a wall of what seemed to be old kitchen pots and pans from the artist Maha Mullah. Encompassing the whole wall, Mullah uses 233 burnt pots, traditionally used in the Middle East. Visually, the donkey and pots are not coherent, yet the subtle commonality of Middle Eastern focus provides some similarity.

My favorite piece in the exhibition is Ljubica by Jelena Bulajic: A simple, yet  detailed portrait of an elderly woman on a large canvas. Bulajic’s inspiration for these portraits comes from random people she sees, who she claims catch her attention due to their “character, look or empathy.” The detail in which Bulajic creates these portraits is incredible. From the small flowers on the shirt, to each wrinkle, the expression and emotion captured in the portraits is fascinating.

In addition to this, I also was interested in Bound by Alice Anderson. A colossal bobbin constructed out of wood and copper thread, the piece dominates the room due to its size and simplicity. By taking such a small item and recreating it in this gigantic state, I felt as if I was Alice in Wonderland after, she drank the “drink me potion,” as cliche as that might sound.

None of the pieces, however, reflect ideas of feminism or empowerment. While some pieces are pleasant on their own, when constructed together in an exhibition, the meaning is lost.

In no way does this exhibition take a stand on feminism. While the intention is there, the execution is lacking, providing disappointment for something that could have been revolutionary. As proved through this attempt, uniting female artists into one exhibition does not exemplify empowerment. Art is a tool, and when properly used it can open dialogue and awareness for issues. While Saatchi tried, I hope his idea will urge other collectors to explore the same concepts, and I look forward to seeing this evolve, if it ever does.