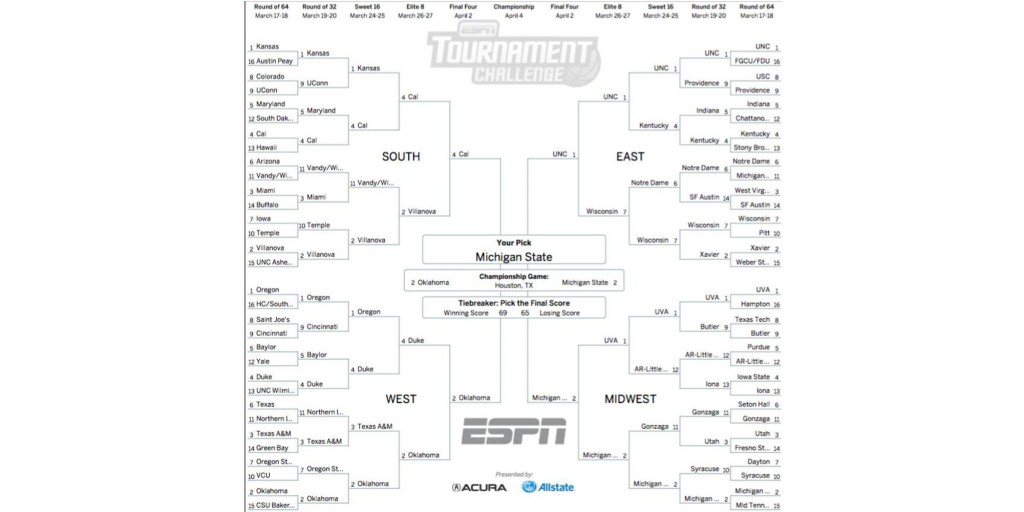 Temple Over Iowa: Temple is a minor upset over Iowa here. Iowa started their season off 21-5, but have since dropped five of their last six games. Momentum is the most important thing in March, and Iowa doesn’t have it.

Wichita State is one of the more experienced teams in the tournament, having two seniors that were a part of their 2013 Final Four team captaining the squad. Fred VanVleet and Ron Baker create matchup nightmares for any opponents, and I don’t see Arizona stopping what could be another miracle run.

I’ll be honest, Miami doesn’t impress me. They lack any impact players behind second round  draft prospect Sheldon McClellan, and Wichita State has the veteran leadership and star power to take down the Hurricanes earlier than expected.

Kansas has good talent – enough to make the Final Four. But California has more, and Kansas will fall after just two wins in March Madness. Led by future NBA lottery picks Ivan Rabb and Jaylen Brown, the Golden Bears of Cal look like formidable foes in the Final Four this season.

Once again I am going with Cal over the heavily favored second seeded Villanova. The winner of this takes a trip to Houston for the Final Four. Jaylen Brown will secure his spot as a top five NBA draft pick in a huge upset.

The Arkansas Little Rock Trojans are a school of 12,000 strong, but basketball has never been their forte. However, they have won 29 of 33 games this season and won the Sun Belt Conference, resulting in a solid 12 seed for the tournament. Purdue will look past the Trojans, and they will make them pay.

Iowa State consistently puts out a good basketball team, but they also consistently put out first round losses. I expect that trend will continue against Iona, who is 15th in the nation in assists per game and in the top 40 for points per game.

You never know what you’re going to get with Gonzaga in the tournament. Since their loss as a first seed to ninth seeded Wichita State in 2013, Gonzaga basketball hasn’t been the same. This year, that changes. Domantas Sabonis and Kyle Wiltjer will lead them to a great run this tournament, starting with Seton Hall as their first victim.

The Orange don’t deserve to be in this tournament, but they are, so you can’t count them out. Dayton usually plays much better as the lower seed, and for the first time in a while they aren’t. Michael Gbinje will squeeze ’Cuse through to the second round, but not much after that.

The Zags are in it to win it and, while that dream will be cut short in the Sweet 16, Jakob Poetl and the Utah Utes won’t be the ones to cut it short. Watch for an overtime thriller here.

Michigan State is one of the most talented teams in the nation, led by senior wonderboy Denzel Valentine and freshman Deyonta Davis. Valentine has two triple doubles on the season and is the only player ever to average 19 points, 7 rebounds and 7 assists. I would like him to win player of the tournament, and Malcolm Brogdon and the Cavaliers of Virginia won’t be able to stop them.

Texas never performs well in the tournament, and without any major impact players or NBA prospects, they don’t scare me. Northern Iowa, however, is the opposite. They never have any big names or top prospects, but they are consistently scary in the tournament. No one can forget their upset over #1 seeded Kansas in the second round of the 2010 tournament. They also beat #1 seed UNC earlier this season in a huge upset. Look out for UNI.

Oregon was generously gifted a number one seed in this year’s tournament, an achievement few expected of them in the beginning of the season. Their miracle year will end disappointingly, though, as the Duke Blue Devils will knock them off with the help of stars Brandon Ingram and Grayson Allen.

Stephen. F. Austin over West Virginia: This is by far my boldest pick of the first round, but listen to this stat: Stephen F. Austin has lost one conference game in its last 60 games. Led by senior Thomas Walkup, the Lumberjacks of SF Austin should scare the Mountaineers. If WVU overlooks them, this one could bust some brackets.

Xavier is one of the weaker two seeds in recent memory, and I don’t see them getting past the Wisconsin Badgers who reached the championship game last season. Led by junior Nigel Hayes, the Badgers have more experience and have consistently played better in the tournament than Xavier has. Don’t be surprised when Xavier is the first two seed to drop.

The Spartans are by no means a cinderella pick – the majority of ESPN writers predicted them to win it all, which is rare for a two seed. Denzel Valentine, their point forward and star, is a man on a mission after their surprising Final Four run last season was cut short by eventual champions Duke. The Spartan depth and outside shooting make them a nightmare to go up against, even if it is young gun Buddy Hield and the Oklahoma Sooners. I expect this one to be close as usual, but for Valentine to eventually lead the Spartans and Head Coach Tom Izzo to their third NCAA title in school history and Izzo’s second.