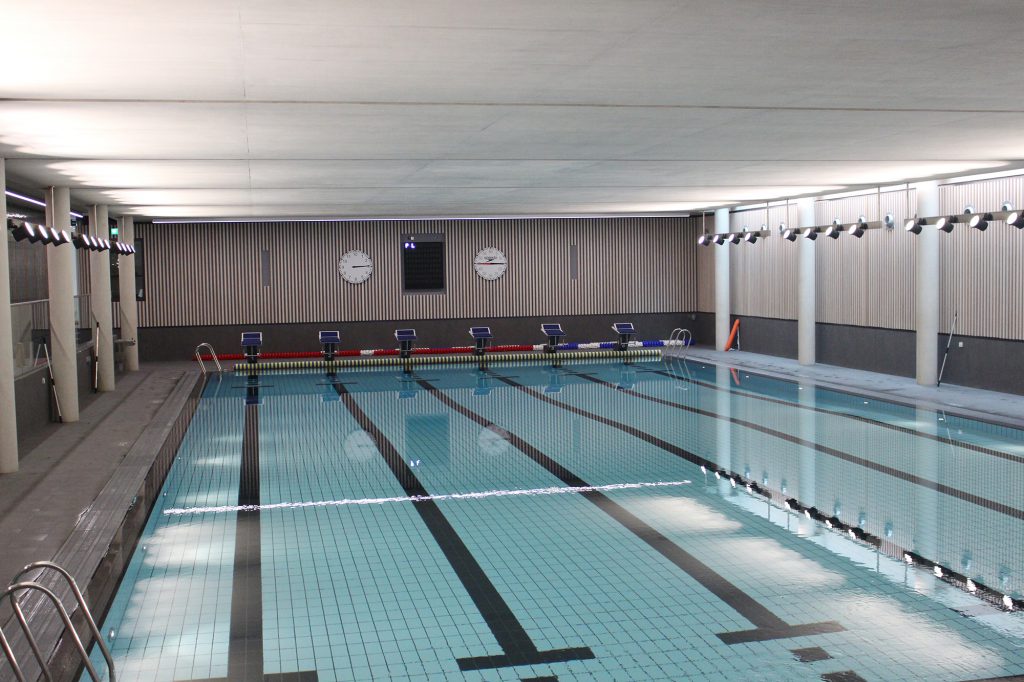 The new school year brought numerous changes to campus with the conclusion of the New Frontiers Construction project. Exemplifying the greatest expansion of campus is a pool, a renovated fitness center and an arts building among others.

In 2010, Head of School Coreen Hester and the Board of Trustees recognised a need to maximize space on campus in addition to growing an endowment for socio-economic diversity. Associate Director of Advancement for Research Devra Flynn ascertains that the entire community contributed to the Construction through volunteering and fundraising. The community raised in excess of £23 million with “minimal” corporate and foundation support.

Similar to Flynn, Associate Director of Advancement for Communication Wendy Robinson appreciates the significant community involvement, though believes the improvements stemmed from a clear need for additional space. “It took a whole community to do it,” Robinson said. “It was the right project so that’s why we got such support.”

The 25 meter pool is divided in half with one shallow end only a meter deep and a deeper end of two meters. Regardless of the shallow depth swimming competitions will be held.

In order to use the pool for any activity, a lifeguard must be present. Assistant Aquatics and Fitness Center Manager Beth Malin cites safety concerns as the main reason for the policy. “It’s about making sure that they maintain safety at all times, so making sure there is no access to the pool except for when there is a lifeguard on duty to provide supervision,” Malin said.

Throughout the school week from 6:30-8 a.m. the pool is available for student and faculty use. During the day PE classes will occupy the pool. From 4-6 p.m. a swimming specialist company called Swimstars conducts lessons for members of the community. Swimstars also holds lessons on Saturdays from 9 a.m. to 4 p.m. However, the schedule is subject to change with fluctuating demand for the pool and the start of the competitive swim season.

Ally Larson (’19) wishes the pool was more accessible to swimmers such as herself. “I feel like it should be easier because although the pool has other benefits besides the swim team it was in truth created for the swim team. Even though the swim team might not have as much access to the pool we should,” she said.

Aquatics and Fitness Center Manager Keith Mainstone will keep the pool open as late as 10 p.m. starting November 28. From November, use of the pool outside of swimming on weekday mornings will require a membership costing £20 for students. Swimming lessons or other classes will require an additional fee.

A fee for parents and other community members will be announced on October 16.

Additional pool availability will include activities other than swimming. Mainstone hopes water polo, synchronized swimming and other water related games will be available as a part of the membership.

Currently, the pool is reserved for the ASL community, but this may change. “ASL comes first and what we found right now, is that all swim lessons are being filled by the ASL community, so there’s no reason to go outside the ASL community if we’re filling the availability from what we’re offering already,” Heynderickx said. “If a year from now only half the slots are filled or there’s a lot of open space, I think it would become a discussion because it would be nice to make good use of the pool.”

The Make Innovate Learn Lab (MILL) in the new Middle School Science wing was created as a “problem-solving space” for all classes, divisions and subjects with MakerSpace Co-Teacher Colin McCarty as the main supervisor.

Tools in the lab include multiple 3D printers, laser cutters and bandsaws. Equipment such as a vinyl cutter, CAT tools and sowing machines will be added. The lab also holds numerous whiteboards, tables and windows that can be written on.

Among those using the space will be the robotics team, but they will not be the sole group. “This is not just a robot space. Robotics will be happening here, but this isn’t owned by the robotics team or anything robotics, it’s a K-12 design, problem-solving and thinking space,” McCarty said.

With greater student understanding of the space, McCarty hopes its niche in the school evolves. “My vision is that it’s not just open during the school day. This is a space that should be open on the weekends for a family to come in and work on a project together. So, It becomes more of a community hub than just a classroom” he said.

Ideally, for McCarty, the space would be open to more than just the ASL community. “I think this would be a great place for the neighbourhood, people in London to come and do things, make the world a better place,” McCarty said.

In order to use the Fitness Center all faculty and staff must complete an induction, which outlines use of the equipment and rules of the gym. The induction includes a basic medical questionnaire.

David Charow (’17) feels it is “ridiculous” that the Fitness Center is not open during free periods for students. He feels it should be open throughout the day from 6:30 a.m. until 6 p.m. “The flexibility to use the Fitness Center when I want is very important,” he said.

Charow realizes the gym can’t be open at all times, but wants greater availability for student use. “We need to come to a compromise to use it when it’s convenient for students, but we obviously can’t have it open all the time,” he said.

Though the Fitness Center awaits equipment such as racks for squatting and bench press, Charow wishes there were more free weights as he feels it is “very geared towards cardio equipment,” he said.

Despite his qualms about the Fitness Center, Charow appreciates the New Frontiers building project. “Overall, the school did a great job with the construction,” he said.

Heynderickx hopes the new facilities help the entire community for years to come. “I think the goal was to try and benefit all three divisions as much as possible and not have something that was only going to serve high school students or only going to serve one or two divisions.”