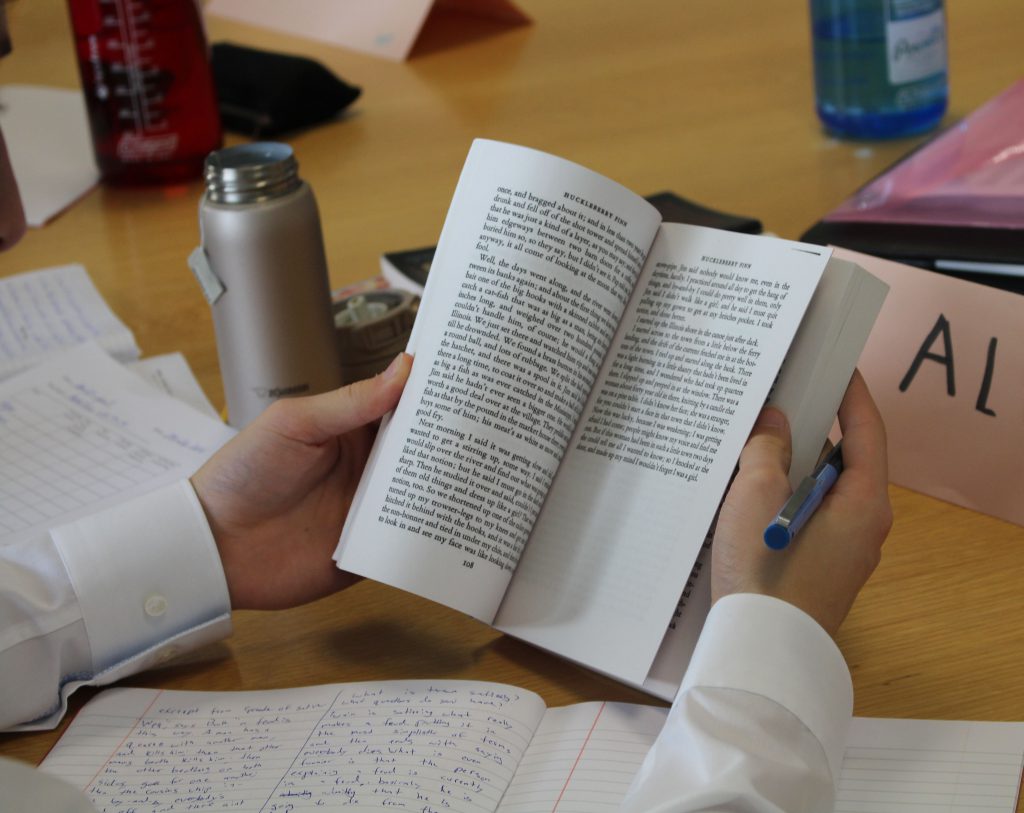 Students in American Literature are studying The Adventures of Huckleberry Finn, by Mark Twain, which features the “n-word” 219 times.

Aware of the controversy behind the word and the complex history it symbolizes, English Teacher Alissa Mears presented students in each section of the class with the question of whether or not the word should be used in discussion and work related to the novel. “I feel like as a teacher it’s my responsibility to make sure that my students understand… the context of the word, but also how its meaning has evolved and changed over time,” Mears said.

Mears began with a discussion on the implications the n-word has had in the media. Through various videos and articles, she provided context to the class of the meaning of the word from the perspective of African Americans. “I recognize that my classes are not racially diverse and so my thought was, let’s get some other voices in the room that have experience with this word,” she said.

Although Mears began with these outside resources, it was quickly highlighted she was missing the voice of members within the community. Amanda Welch (’18), who is not currently enrolled in American Literature, overheard details of the conversation through friends. “I thought it was just the one class discussion. I thought they were not going to use it, then I kept hearing about it from my friends and I started getting kind of [concerned],” she said.

Welch is African American and often struggles with lack of representation she feels in the High School. “I feel a difference when I go down the hall and I don’t see people like me or teachers like me,” she said.

Consequently, when Welch heard students were discussing using the “n-word” in an English class, she was taken aback. “I think the general rule is, if you are not from the black community you cannot say the word. Personally, I don’t use it. But do I have the option too? Yes, but I don’t,” she said.

Welch brought this concern to Mears’ attention, and compiled her thoughts into a letter to the students in the classes. Mears read Welch’s letter aloud to both classes and let her students revisit the discussion on the usage of the word. Both classes ultimately decided not to use the word.

Ayse Yucesan (’18), who is currently taking American Literature, was at first not aware of the implications of using the word. “I had never known about these racial issues prior to coming to ASL, and I had not grown up in an environment where this was such a significant issue, I really didn’t know that the n-word had held such power,” she said. “And I would not have known that it affected one of my peers, had we not had that discussion.”

After reading Welch’s letter, the gravity of the word was put into perspective for Yucesan. “Before, when we were talking about how this word belonged to black people and this word could only be said by them, I didn’t associate it with [a] face,” she said. “I didn’t associate anyone that I knew who could have potentially felt this way.”

Welch later shared her letter on Facebook, in hopes that more people would realize the significance of the word, hoping to change their perspectives. “I think everyone has the right to voice their opinion and I think that’s what I did,” she said. “I hope maybe in the future this will lead onto something bigger about the lack of diversity.”

Jake Perelmuter (’18), another student in American Literature, is glad the class was able to at least have the discussion. “I thought that it was important that we didn’t avoid the topic, and that we embraced the uncomfortableness that the word itself produced,” he said. “Hearing the perspective of a black person, which was a voice we did not have in our class, completely changed my thoughts on it because all of us had opinions on how to use it, but none of us are oppressed by the word first hand.”

In reflecting on the conversations stimulated by the uncertainty of her American Literature classes, Mears wonders if students in the High School are unable to engage in discussions of this nature. “I think it was clear from their reaction that we don’t have this conversation enough,” she said. “It’s important for us, as the adults, to facilitate a conversation that is important to us but more importantly important to our students.”

Mears knows she has learned a lot from the experience, and hopes her students have as well. “My students may forget The Adventures of Huckleberry Finn, but they won’t forget this conversation.”