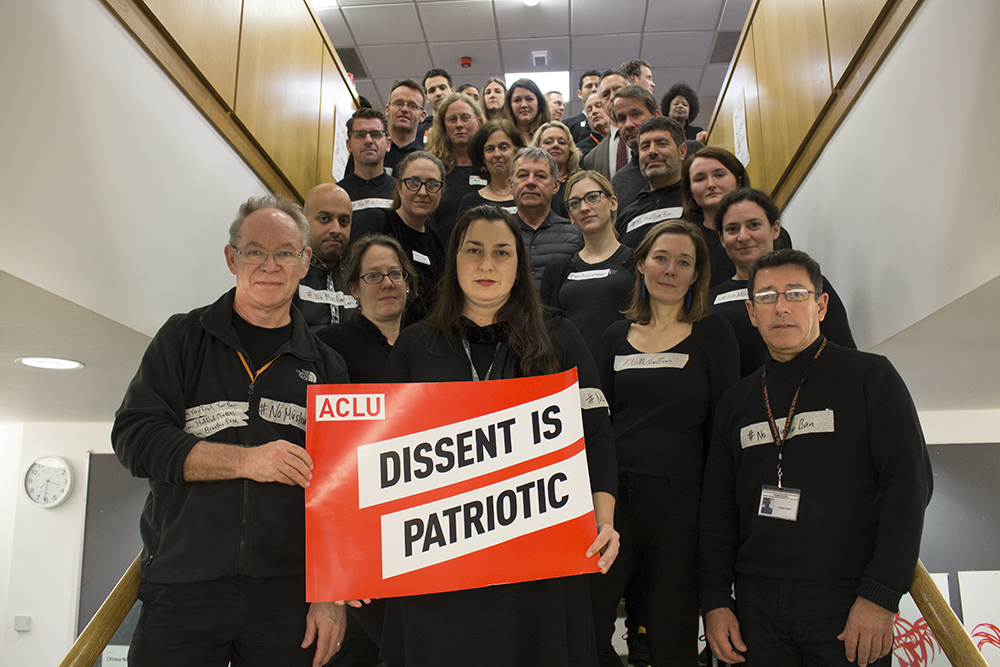 The order, signed on January 27, restricts immigration into the U.S. from Iran, Iraq, Libya, Somalia, Sudan, Syria and Yemen for 90 days. All refugees attempting to enter the U.S. are barred from doing so for 120 days, and Syrian refugees are barred indefinitely.

After attending a march on January 29 from Whitehall to 10 Downing Street, Head of Math Department Neil Basu wanted to cultivate a larger conversation in school about Trump’s policy. Basu spoke with other teachers, namely Head of Social Studies Department Natalie Jaworksi, before contacting Principal Jack Phillips to approve the protest among faculty. Once confirmed, an e-mail was sent to teachers encouraging them to dress in black and wear the hashtag.

Basu disapproves of Trump’s newest Executive Order, believing it ill-considered for a policy affecting so many. “He is really unfairly stereotyping large groups of people without just cause or clear historical or recent justification,” Basu said.“And he’s doing it based on nationality and religion in a way that is just too wide sweeping. I don’t support that.”

Similar to the worldwide Women’s March on January 21, Basu attended the march last night to hear the perspectives of other people. “I just found a lot of unity and people feeling as though they wanted the U.K. to have a voice in at least letting the U.S. know what it deemed responsible or irresponsible,” he said.

Today, many students joined the teachers’ demonstration throughout the day by making #NoMuslimBan stickers at Top Orange. Others, such as Surya Dhir (’17), did not wear the stickers, but continued to challenge Trump’s actions. “Donald Trump’s Muslim ban is an afront to the values on which the country was founded,” Wang said.

Likewise, Ayse Yucesan (’18) finds the wide-sweeping order offensive. “I think all it does is contribute to Islamophobia and essentially fuels hatred within already divided people. I don’t think that it is benefitting anyone by banning entire populations of people based on the actions of very few,” she said.

Not all students joined the cause. Jon Sullivan (’19) wore a piece of tape emblazoned with #BuildTheWall, referring to Trump’s proposal to build a wall across the southern border of the U.S. “I felt like the school and administration has institutional bias. I did it less out of support, but more to see how the student body and teachers would react,” Sullivan said.

Despite his feelings about the school’s singular political perspective, Sullivan appreciated teacher’s sharing their thoughts. “It’s good to see that they can express their views safely,” he said.

Jaworski viewed the protest as the teachers’ own form of a spirit day, except for a more momentous occasion. “We decided to use our voice to stand in solidarity with those people,” she said.

Spreading awareness about what Basu believes to be a social concern rather than political was crucial. “For me, the most important thing is for people to understand the idea of it not being political, but it being about human rights,” Basu said. “To me there is a difference there and that is really, really important.”