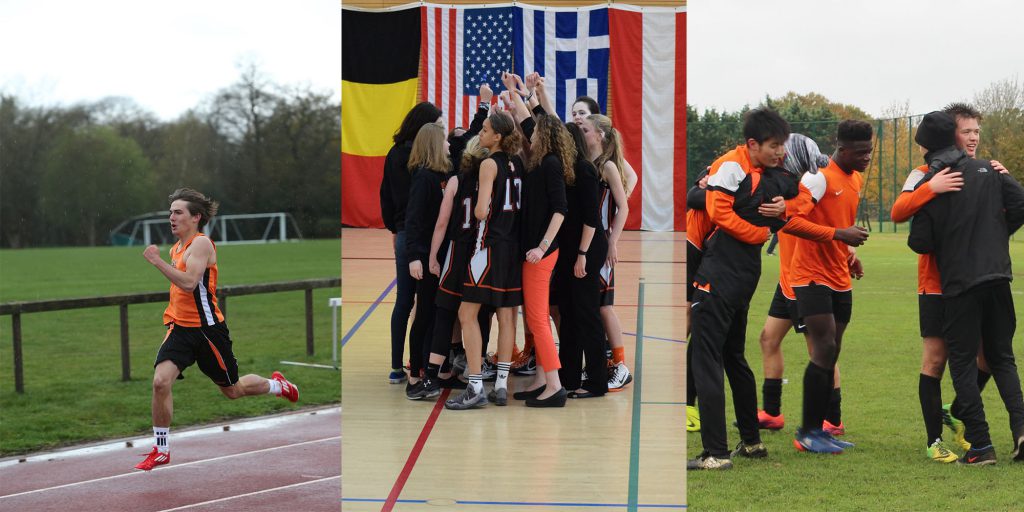 Led by Head Coach Jessica Mazzenga, the senior-dominated varsity girls basketball team won ISSTs. The team impressed greatly at the tournament, remaining undefeated and beating TASIS in the final. Guard Riley Evans (’17) described the victory as “amazing”, and was relieved that they had finally ended their bad run against TASIS, having lost to them in the previous two ISST finals.

Track and Field win the combined ISST title, May

The Track and Field team triumphed in the combined category of the ISST tournament for the first time since 1992. The team won seven gold medals individually, and with the girls and boys teams both finishing third, the combined trophy was theirs. “[Winning ISSTs] was a fantastic experience. All the hard work and effort that we put in earlier in the season came together and paid off in the end. It was quite emotional,” Ryleigh Cornelius (’18) said.

With Head Coach James Perry at the helm, the team of Mark Haghani (’18), Rep Woroch (’17), Christopher Fletcher (’17), Andrew Franz (’16), Anshika Singh (’18) and Adam Romeih (’18) secured back-to-back victories at ISSTs. The team ended their performance with a combined score of 378, 13 points ahead of the nearest competition. “It was a great experience winning back-to-back ISSTs, we look forward to doing it again this year,” Fletcher said.

The combined forces of the JV and varsity girls swimming team dominated the 2016 ISST tournament. The varsity team’s total racked up to an impressive 120 points, while JV girls finished on 141 points, 79 points clear of British School of Brussels (BSB), who finished second. Together, they secured their third gold medal finish in the past three years. “The Swimming ISST works by age, and we were the oldest in our group as ninth graders, so it was a really good opportunity to win,” Ally Larsson (’19) said.

Mainly composed of juniors, the varsity boys soccer team triumphed in last year’s ISSTs. The team went undefeated throughout the tournament, and on their way to victory, they managed to break the ISST record for biggest marginal victory, beating Paris 9-0 in their final group game.  “Scoring that many goals gave us so much confidence, as everyone played well and was involved in a goal,” Haghani said.