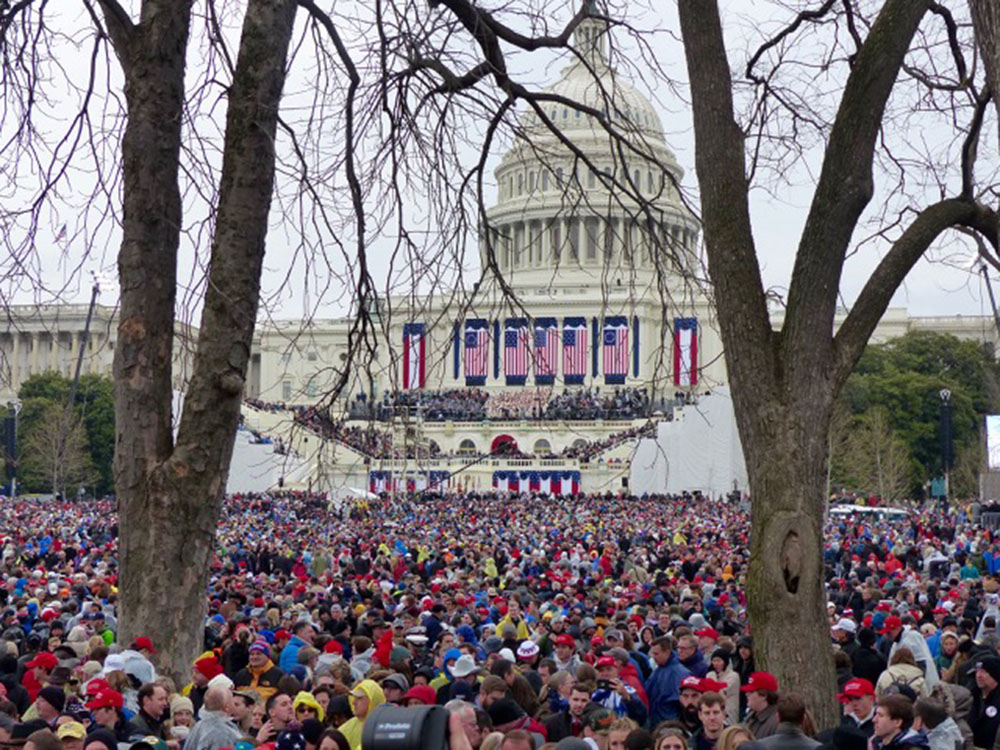 “U.S.A. U.S.A. U.S.A.” broke out as the Fox News cameraman panned the crowd around me on the Capitol grounds waiting for Donald J. Trump’s inauguration.

My ticket let me into a standing area after clearing security at 7:15 a.m. The inaugural podium was off in the distance, but I had a good view of a jumbo video screen. I wore a badge with a peace sign and a Barack Obama image. People looked, but no one ever commented. Trump would take his oath in four and a half hours. Rain was forecasted. Security banned umbrellas; I forgot my poncho.

Trump’s inauguration was my third. On a dreary cold day 12 years ago, I sat surrounded by mostly empty seats for the second George Bush inauguration on the Capitol grounds. Four years later on a bitter cold day, I stood in the crowd at the top of the mall for Obama’s first inauguration.

The day before Trump’s swearing in, I walked the decorated inaugural parade route to the White House before going to the Lincoln Memorial concert. Away from Pennsylvania Avenue and Capitol Hill, there was little evidence of Trump’s inauguration. I spotted some rude graffiti and posters for an anti-Trump rally. In contrast, the city storefronts had signs welcoming the Obamas in 2008. Patriotic bunting and images of Obama were prevalent wherever I went. This year, Trump memorabilia vendors were mainly along the parade route and around Capitol Hill. Red “Make America Great Again” caps were $20. Individual vendors had assorted anti-Hillary Clinton T-shirts and alt-right wing messages. A small crowd took pictures holding signs thanking the Obamas with the White House in the distance. When Trump supporters walked through, there were awkward glances and whispered comments.

The crowd at the Lincoln Memorial Concert was smaller than the one eight years earlier, but they were in a party mood. I arrived in time to hear Lee Greenwood perform “Proud To Be An American,” which roused the masses. Here I also saw a small group of black men holding “Blacks for Trump 2020.com” signs; they were the only group of black Trump supporters I ran into on my trip.

As I settled into inaugural morning, I stood in a sea of white Trump partisans, who traveled in from all over the country, standing silently with their hands over their hearts during the national anthem, and bowing their heads during the invocations. Conversations struck up as we waited. I shared my history at past inaugurals. A collector of World War II paraphernalia complained that U.S. schools did not teach World War II history. Using binoculars, he identified the rifles security officers had as they stood watch on top of near by buildings. Later he yelled “bring back the Bible” when Trump proclaimed, “we are protected by God.”

A woman announced that Obama had pardoned Hillary. Someone checked the Associated Press (AP) wires and found no corroboration. Another claimed Hillary had ordered the murder of 400 people. No one commented. Two couples argued about crowding each other’s space. Whenever Fox News cut to the newscaster nearby the cheering erupted: “U.S.A., U.S.A.,” “Trump, Trump.” One cut featured an interview with Willie Robertson from Duck Dynasty. I got looks of incredulity when I asked who Willie was. There were families with bored children needing to go to the toilet, an ordeal to push through the crowd to get to. I recommended she “lead with the kid” to one mother. Once back 30 minutes later, she said, “I need a drink.” We had more in common than I thought.

After a music program and historical videos were shown, the screens began to telecast the arriving dignitaries. Remembering the wave of jeers for Bush at Obama’s first inaugural, I anticipated a spirited reception for Bill and Hillary. Sure enough, when Hillary appeared on the screen, the booing erupted. “Lock her up,” could be heard. The Obamas and Bidens received a restrained reception; the scattered muted applause was louder than any booing in my area. When Trump finally appeared, thunderous cheering kept going as he made his way to his seat and the ceremony began.

New York state Senator Chuck Schumer ignited the most raucous jeering during his remarks when he said, “Whatever our race, religion, sexual orientation, gender identity…” The people near me were having none of this talk. “Drain the swamp, drain the swamp,” could be heard in the wall of sound.

Trump’s speech was mercifully short and crafted with chilling phrasing I won’t forget. While the “forgotten men and women,” may have felt validated, I walked away disconcerted. I was disturbed by the nationalist references to “America first,” his description of “the American carnage,” and his belief that opening the heart to patriotism, “there is no room for prejudice.” I found ironic his rules to “buy American and hire American,” given his business history and his call to “debate our differences honestly,” after watching during the election.