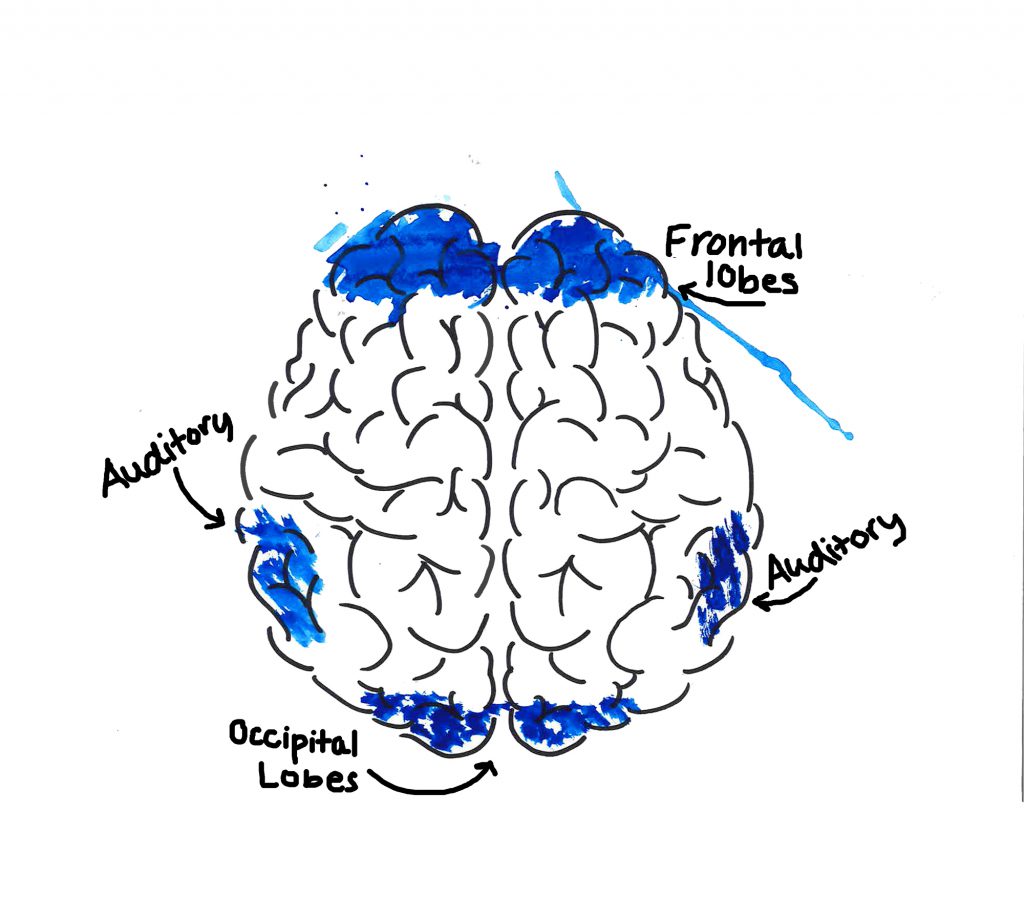 “I wish that the first time we come together as a community were under better circumstances, but unfortunately that’s not the case. I need to update everyone about a serious disciplinary matter.” These were the first lines of a speech given by Principal Jack Phillips, to Grade 9-11 students on the first day back from Winter Break.

Following an expulsion before the break – a case involving LSD –  Phillips felt it was necessary to communicate information on the incident, the school’s illegal substance policy and how students can receive help if needed.

In addition to the fact that students in the High School were in possession of LSD and sharing it with others, Phillips felt unprepared in dealing with a drug itself as he had not seen it before. “That’s what scared me the most, that this was a drug I was not familiar with and one that has a reputation,” Phillips said.

Greg* (’19) claims the usage of LSD was brought up casually in conversation amongst friends, however, he didn’t realize the gravity of the situation until people around him started taking it. He believes that the consumption of LSD began with gateway drugs. “It started out with alcohol and weed. Then ’shrooms [and finally] LSD,” he said.

Student possession and distribution of LSD is something Phillips has never encountered before in his career. He, as well as the rest of the administration, have struggled to comprehend the ease of accessibility of all drugs amongst students. Especially with the legalization of marijuana in the U.S., it is harder for Phillips to craft a message against it. “It becomes trickier when we are sending a message saying ‘hey, this isn’t a good thing’ but more and more it is being becoming more socially acceptable and readily available,” he said.

This was the case for Martin* (’20). Able to walk into Camden market and get approached by dealers almost instantly, Martin and his friends had no trouble acquiring marijuana. Beginning in Grade 7, some of Martin’s friends tried marijuana– which eventually cultivating a habit. Enticed by the lure to partake with his friends, Martin found himself involved as well. “They were always around me doing it. I tried to stay out of it but eventually… when they’re your friends and you’re always around it, it’s hard to stay away,” Martin said.

Martin feels that smoking marijuana is a problem for a lot of his friends, as their habits have intensified with their entrance into high school. To Martin, it is the beginnings of a dangerous cycle “where there are more days they have smoked than not,” he said. “I think [this is] where it starts because when you go into high school there’s this whole, ‘oh I’m older now and that’s what older kids do,’ and there’s that pressure to do it, not from anyone but just because it’s high school.”

Hassan* (’17) has been approached by numerous underclassmen for help acquiring marijuana and alcohol, but never LSD. Hassan doesn’t distribute drugs, but he struggles to figure out where someone would even acquire LSD. “I literally have no idea where you could buy it. I have no idea where to get your hands on it,” he said.

But Hassan has witnessed the effects of LSD first hand. At a friends house one night, he saw the ramifications of the drug when one of his friends took it. “It was sort of like they were in a different world. They were aware of what was going on but they weren’t really paying any attention,” he said.

However Hassan does understand the nature of students asking other students to buy drugs for them. “You’re taking a lot less of a risk buying from a kid at school who you know,” he said. “It’s not just some random guy in Camden. It’s just safer to buy drugs from a kid you know.”

To Phillips, distribution is what the school is able to tackle and reprimand. “That is where we can concretely draw the line about what is acceptable for here at school and what is not. And then keeping our community safe, which is why for example dealing is not acceptable no matter where you are,” he said.

Phillips’ main concern is the safety of the student body, hence the school is able to support those who need help. “Most drug use, especially for adolescents, is trying, testing, experimenting. We don’t think it is a good idea but we want to hear you, and help you understand why you shouldn’t do that,” he said.

Health Teacher Joy Marchese, who is often sought to discuss issues relating to drugs, believes the only reason for teachers to break confidentiality on personal matters is if the situation harms a student’s immediate health. “Our biggest concern is the safety and well-being of students and in order, I think, to keep students safe, they need to trust you. It does take time to build trust,” she said.

Brian Robert (’17)  feels safe reaching out to teachers about personal problems depending on the level of trust within the relationship. “I feel safe about speaking to two or three of my current and past teachers just because of the relationships I’ve built with them in particular, but I wouldn’t say I feel safe to speak to all of my teachers,” Robert said.

However, Robert feels skeptical about approaching some teachers about personal issues. “I worry that some [teachers] don’t know students well enough to handle the situation properly and don’t know how to take care of it without telling someone else,” Robert said.

In most situations, the school is focused on helping students. “Ultimately the reason students would be coming forward about themselves is because they know they need help. So we would not punish a student for coming forward because they are asking for help, we would get them the help that they need,” Marchese said.

As ASL is a pivotal part of Robert’s life, there is still a fear of compromising this. “For most of us, everything revolves around ASL and if we do something to jeopardize our enrollment, we’re not going to want to tell anyone because it would already make the situation so much worse,” he said. “If the administration insists on helping students experiencing problems, then they can’t punish them for coming forward.”

Yet students like Martin feel comfortable approaching the administration for help on all issues, not just substance abuse related. “I already have sought out help before and I feel comfortable doing that. I came with problems to them and they said they’re going to help,” he said.

*To protect the privacy of certain students, names have been changed in this article.

It’s Saturday night, and Kendal Fass (’19) finds herself the only sober one at the party. What started as a few beers freshmen year, has now spiralled into an uncontrollable cycle for her classmates. “[Freshman year] is when it got really bad, before that it was a couple beers and that would be it, but now it is a lot of hard alcohol plus a lot of beer,” Fass said.

Having to help people on multiple occasions, dealing with drunk classmates is all too familiar for Fass. “I wasn’t one of their friends and I am still helping them do something that you shouldn’t need help with,” Fass said. “I had to slap them awake, slap their face, make them drink water, put food in their mouth.”

This situation is recurring for Fass. “Some people who I’m not closest with know I’m always going to be there, and I’m going to clean up anyways, and help them anyways,” she said. “So sometimes it feels like just because I don’t drink I’m labelled as the mom, or like the housekeeper.”

Sam Holzman (’19) has found himself in similar situations as Fass before, sometimes of a greater magnitude. “One time my friend drank, I think, 10 shots without eating any food, and then when I saw them, about 10 minutes later I found them in a bathroom in a pile of throw up with blood coming out of their nose,” he said.  “Me and one other person had to put her in the recovery position and clean everything up. She was passed out for the next two hours.”

Caitlin Welch (’18) believes that just because people get older, it doesn’t mean they have a better grip on alcohol.“I feel like a lot of my friends if they want to have fun at a party they need to drink to be more careless,” Welch said.

Welch believes this stems from a culture in the High School of0students following their older sibling’s behavior. “I think there’s more of a pressure in society in general, there’s more of a pressure to grow up sooner,” she said.  “So I think people if there are people freshmen year who have older siblings, they see them and they think ‘oh they’re drinking, our grade should drink’.”

For Greg, the drinking culture resulted in increased pressure. “I [drank] as a freshman because there’s this whole culture behind it. Being around seniors and all that as a freshman. The entire High School is built around them and respecting their authority, and not getting blacklisted basically. There’s definitely a lot of pressure to partake,” he said.

With a sibling in the Middle School, Suzy* (’18)  has noticed similar trends in the Middle School, yet it is hard to reprimand her sister for it. “Around the same time, I was getting involved [with alcohol], so I don’t think it is fair for me to be second guessing [my younger sister] when I didn’t think twice about it,” she said.

European culture and the drinking age also spur more students to drink, Suzy believes. “People’s parents are more accepting in the U.K. than they are in the U.S. At least, my mom felt more comfortable with it, because my older sister was legal to drink here,” she said.  “She felt fine with me drinking because there were people who were responsible, and we all are more educated here than people in the states.”

The mix of cultures at the school blurs the lines for Phillips, as it is hard to deem what is okay and what is not.  “Here we are in the U.K. context, where it is perfectly fine for an 18 year old to go to the pub and drink unsupervised in whatever way he or she sees fit. But 85 percent of our [seniors] the next year will go to the U.S., and now it becomes illegal,” he said. “Added on top of that, is the mixture of cultures within the school, all different kinds of backgrounds. People with an observant Muslim background will not touch alcohol, others for some European cultures it is very much drinking from early on. There is navigating that complexity of it.”

Similar to drugs, the school works to control what it can in regards to school and school activities. Phillips also relies on science and research to help deter students from the substance. “There is no question it is bad for 18 year olds to drink. That is the science of it. Until your brain is about done growing at 25, you shouldn’t be altering it with substances,” he said. “We can rely on that. We think and we hope that with information [students] will make the best decisions you can.”