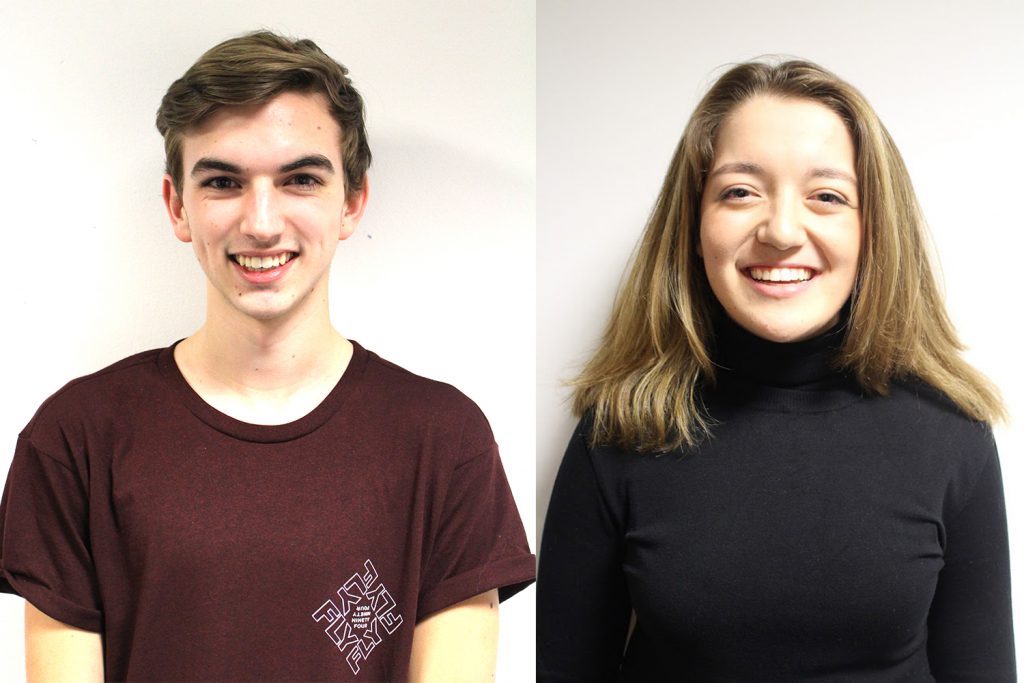 StuCo members running for president gave speeches in front of the entire high school in an optional assembly on February 22. Students now have the opportunity advise their grade representative on whom to vote for. Before the election, The Standard found out what the presidency means to the two aspiring candidates.

What has been your greatest accomplishment during your tenure as a StuCo rep?

I would say my work on the advisory program this year was probably my greatest accomplishment. I noticed at the beginning of the year that the student body was not particularly happy with how advisory had been running and it also seemed like the mix of advisory and assemblies were really taking up a lot of our conference time and our free time, so I approached [Grade 9 Dean Jennifer] Craig, who has been heading the Advisory Program so far, and talked about my concerns with her. Together we worked on developing a series of ways to make advisory better for the students and the teachers including: Moving assemblies to Thursday instead of Fridays, so that they are instead of advisory rather than in addition to, which is going to be implemented later this year or next year, as well as creating a student-advisory committee made up of a [group] of students and faculty who can decide on more concrete ideas about the advisory curriculum and working out the issues we have had so far.

Why do you want to be president?

I have noticed recently that things [within StuCo] have seemed to be a little less organized than they should be, among [events like] spirit week and bashes, and things like that. They have been running well, but not as well as they should have been, and I think that has been felt by not only members of StuCo, but also the student body. I want to be able to make sure that that organization is really there and that it would make things more fun and more entertaining for everyone.

What is the biggest issue facing Stuco Right now? How do you plan to tackle that?

I think that the biggest issue is spirit in the High School. Spirit has been really low, I’ve found, over the years, and I just would really like to introduce more blackout days on days of big sports events. And make those more frequent and more publicized throughout the High School so that people really know what is happening. Maybe also have spirit points up for grabs so that people get really into it, and are more encouraged to go to the games.

If you are elected president, what will be your main goal?

My main goal if I were elected president would be to get people more excited and into all of the events that we do, spirit week included and the bashes, as well as all of the little candy cane grams and Valentine’s Day roses. I feel like those things have not been as emphasized as they could be. I just want to get people more excited also about not just StuCo things, but also all sort of extra-curricular activities around ASL, and make sure they are all publicized and that people get into it and have fun.

What makes you a good leader?

I think that I am really aware of who is participating and how things are progressing in conversation around the school, and I think that my main job as president would be to regulate that and make sure everyone is getting a say, and things are never too biased or one-sided. I would want to make sure that things are always as fair as possible, but also I would be strong enough to make sure that the faculty hears the student voice and makes changes based on what we want.

What is one thing the HS student body should know about you?

I think that the student body should know that I am really approachable and I am always willing to listen, and I actually really hope that I hear new ideas and new opinions on how things are running and how things can change, because I think the best way to make changes at ASL is to get as many people behind it as possible. And that shouldn’t just come from the Student Council, that should come from everyone.

Who inspired you to join StuCo?

I would say my brother [Hayden Victor (’15)] really inspired me to join StuCo l because he had been in the High School before me and had always talked about how he wished he was on StuCo because he wanted to have more of a say and be more aware of the behind-the-scenes of what went on in the school. And I really listened to that and decided to run for StuCo and I have really valued that ability to be a part of making change in the High School and understanding everything that goes on.

What has been your greatest accomplishment during your tenure as a StuCo rep?

I have been the spearhead of the academic committee for the past three years, and since the first semester this year, I have been working with [Assistant Principal Karen Bonthrone] to increase student involvement in the design of the [High School] syllabus at ASL. Many of my peers expressed their concern to me that they didn’t have a choice in the classes they were offered, leading me to schedule meetings with [Bonthrone] to most effectively resolve this issue. As many know, it is very difficult to make a change to a part of ASL as established as academics, so it makes me very happy that students will finally be able to create some class options that they want to take, such as philosophy, law or government. And my work with this initiative is not over yet, because I am very passionate for student involvement in academics since it is a core part of our high school experience, and I want to do everything I can to ensure that students can have the best experience they can have academically and generally.

Why do you want to be president?

To me, Presidency is about making sure everyone in the High School is content with their lives, and has the best possible high school experience they can have. So ever since coming to ASL in 2008, making my peers feel welcome and accepted, and trying to [improve] the student body, has been one of my greatest passions. And being President is the best way for me to continue this passion and help my peers. I believe I have the necessary qualities for a very successful presidency but beyond my eligibility, I want to be President, because I love the Council, and I love the students and I want to do everything I can to improve their lives. So Presidency is the best platform for me to carry out this goal.

What is the biggest issue facing Stuco Right now? How do you plan to tackle that?

The lack of communication between the students and the administration is one of the biggest issues facing StuCo right now. The students are unaware of the decisions of the administration and the administration is unaware of the concerns of the students, so as President, I would schedule monthly meetings with [Director of Student Life James] Perry, [High School Principal Jack] Phillips and other relevant administrators to discuss students’ concerns, and give feedback about the current events and changes being made in the High School. The notes from these meetings would be published through a regularly maintained StuCo Haiku Page, and following these meetings, I want to hold lunch time meetings with any students interested in attending to voice their concerns to the Council, which would allow them the opportunity to represent themselves. Such initiatives would greatly improve the problem of communication facing the student body and StuCo right now, and allow for students to have a more transparent relationship with not only us, their representatives, but also the administration.

If you are elected president, what will be your main goal?

If elected President, I will do everything in my power to redefine the meaning of StuCo and to being the bridge of transparency between the administration and the student body. The students’ voices will be represented in even the smallest issues concerning their lives, and they will always be aware of the changes and events happening in the ASL community. The flow of communication between the students, the representatives, the administration, even the parents, will be greater than ever, allowing a mutually beneficial year.

What makes you a good leader?

My ability to follow through on my promises, my unwavering dedication to StuCo and the student body, and my determination to achieve all my goals all make me an effective leader. However I believe delegation is the key for any good leader. And through my many years of experience working on a team of strong and opinionated students, such as those on the Council, I have perfected my skill of delegation. I can delegate positions, realize the value of individual work and understanding the importance of working as one unit. As a leader, I don’t have to be the frontman all the time. Instead, I just have to make sure everyone is aware of their role and everything is running smoothly. This is a skill that I value, and a skill that makes me a very good leader, because I don’t, and will never, crave the spotlight, all I care about is making sure all is as it should be. And making sure everyone knows they are vital to the success of the Council, and making sure we follow through on our promises.

What is one thing the HS student body should know about you?

I think the High School student body should know that if elected as president, I will cherish my position every single day, because presidency is not a role or a “position” for me, it is a dream that I have aspired to be for as long as I can remember.  StuCo isn’t just a way for me to spend my time, it is something I love, and am passionate about. So my hard work and my determination will never falter. My love for the Council, for my peers, and everyone involved in the High School has been growing since the first step I took in my first Middle School Student Council meeting in fifth grade, and will continue growing until I take my last step out of [Math Teacher Tony] Bracht’s room. In all honesty, it’ll probably keep growing after that. So the one thing I would highlight is that if given the privilege of presidency, I would never stop trying to give all of my effort into deserving such an amazing position.

Who inspired you to join StuCo?

I was inspired to join StuCo, initially in 2008, when I first came to ASL and the High School StuCo President at the time made a speech to the entire school telling students that they were welcome, and would always be accepted at ASL. I remember this speech because I went home and wrote it in my diary that day… Since that day, ensuring that all members of this community felt welcome, accepted and content has been my goal, and student government has been the main platform through which I have been able to achieve it. So I was inspired to join StuCo in 2008 by the President at the time, but I have remained here because I’ve loved every minute of trying to improve our school and our lives, and I will continue loving it for the duration of my time here.