The necessity for sleep 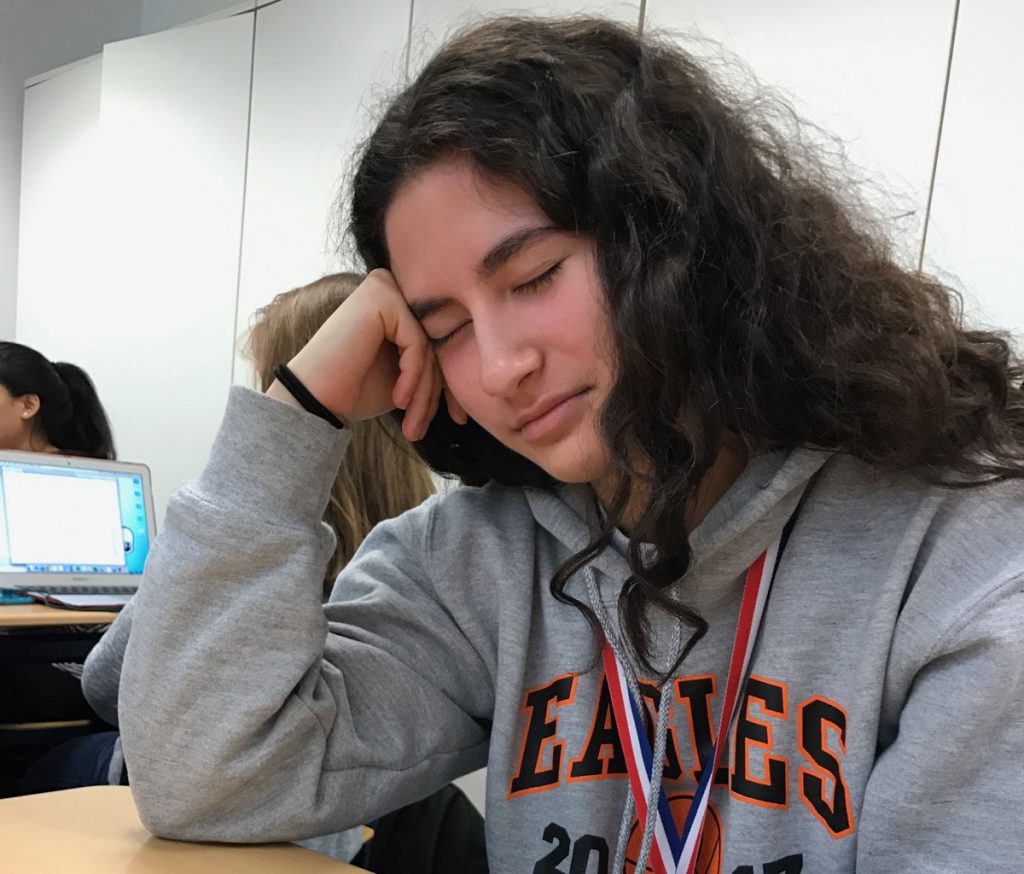 Imagine playing a sport or participating in an extracurricular activity for hours after school, then rushing home to do even more hours of homework, and then spending even more time on electronic devices before going to sleep after a stressful day.

This is the reality for the nearly 40 percent of 256 high school students who indicated in a recent Standard survey that they are struggling to find time to sleep with their busy and tiresome schedules.

Sleep is an imperative part of teenage brain development. According to the National Sleep Foundation (NSF), high school students need at least 8 to 10 hours of sleep a day in order to stay healthy, synthesize their learning and manage stress. In addition, the BBC reported in a March 2016 article that teenagers need even more sleep than both children and adults because during sleep their bodies produce hormones that are needed for them to grow.

Regardless of this, 71 percent of the students surveyed said they feel that they do not get enough sleep every night and 85 percent indicated they regularly get less than eight hours of sleep.

Siena Moran (‘19) sleeps an average of six to seven hours each night and has pulled all-nighters in the past to complete homework assignments and study for exams. In the future, she is aiming to sleep more, believing that sleep is extremely important. “It’s scientifically proven that we need sleep. It’s how our bodies recharge, organize short and long term memory, and without it there can be a lot of harmful repercussions,” Moran said.

Similarly, Nurse and Health Advisor Tori Haynes said sleep is vital for students’ general well-being and learning.  “Sleep helps your brain function, your physical health and your growth and development,”she said. “If you don’t get enough sleep it’s going to negatively affect those things.”

Science Teacher David Partridge agrees and notices the results of students lacking sleep. “There are students whose performance is suffering because they are not getting enough sleep. It is impossible to perform well if you are tired,” he said.

Moran agrees but said it’s rare that she or her classmates manage to achieve an average of 9 hours of sleep during the week. “Many of my friends sleep less than I do, and it baffles me since I feel so tired on a daily basis – I can’t even imagine how they function sometimes,” she said.

Although getting enough sleep isn’t easy and is often difficult to make a priority, Haynes acknowledges that it’s essential for a person’s well-being and productivity level.

Aside from being less productive without sleep, according to the NSF there are many more consequences from not getting enough sleep include becoming more forgetful, limited concentration and academic success. Sleep deprivation can also affect your skin by becoming more prone to acne and make you more susceptible to illness.

HS Technology Coordinator Mariam Mathew believes one main cause of sleep insufficiency is technology. Although she realizes that “students have so much on their plate with school, classes, homework, clubs and sports,” she thinks what is holding them back from going to sleep earlier is their phones.

Reiterating Mathew’s opinion, the survey showed more than 50 percent of students believe that one of the reasons they go to bed late is because they are spending a lot of time on an electronic device before they go to sleep.

Faris Fakhry (’20) believes technology delays his homework which makes him go to bed later. “It promotes procrastination, I start to waste more time and I am not as efficient with my homework as I would like to be.” He said that he could probably get 1 to 2 more hours of sleep if he didn’t waste time on his phone. “Electronics are a really big distraction because within three clicks you [could] be on Netflix or something,” he said.

Not only is technology using up too much time so teenagers won’t be able to have 8-10 hours of sleep, but what minimal sleep they are getting is often not good sleep. Based on reports from the NSF it is possible to improve memory and learning with a good night’s sleep. “Sleep is that time when your ideas get together and synthesize,” Mathew said.

Using technology prior to falling asleep not only affects school work and memories, but also impacts students’ sleeping patterns. In fact, according to Business Insider UK, smartphones emit a blue light that during the day can help people see screens better, but during the night can really trick their mind to stop producing sleep hormones.

Mathew recognizes this, yet notices, “[Most students] haven’t realized that the blue light on phones is bad, not for just falling asleep but in terms of having a good deep sleep. I think that has been a huge factor in their sleep patterns, but they don’t know it because they have always had these devices in their lives.”

Within the past year many smartphones, including iPhone and Samsung devices have added a new mode called Night Shift that adds an orangey tint to the screen to help get rid of the blue light. However, using electronics before sleep still affects users even with this new feature.

“One of the biggest things is to realize that your phone is not always your friend, it can work against [you],” Mathew concluded.