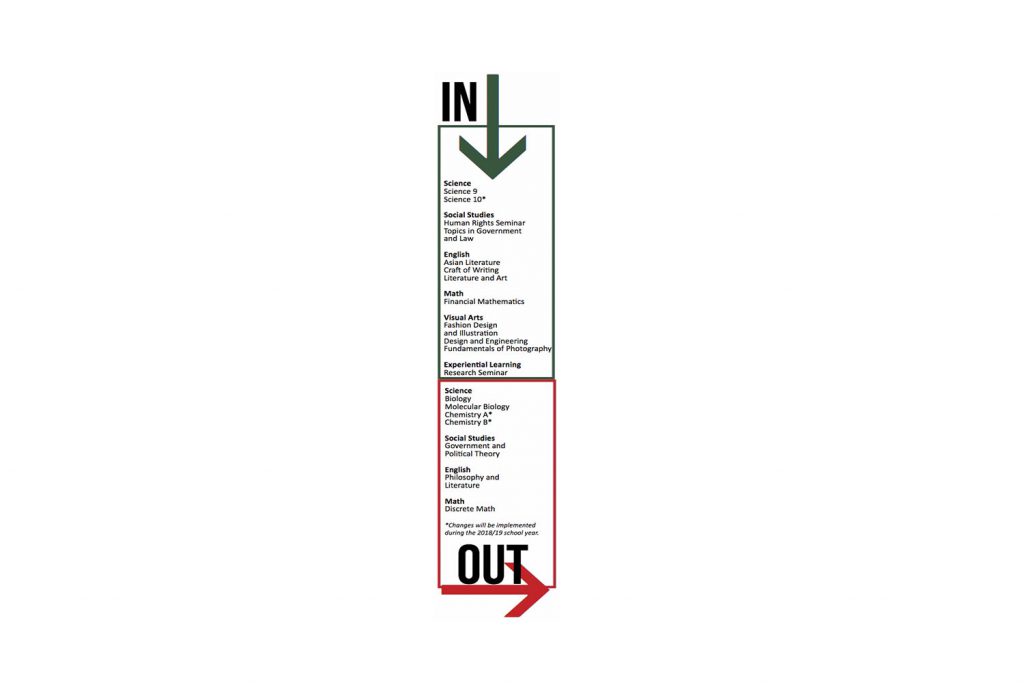 The changes to the science curriculum were made to better align the courses with the other core departments, namely English and Social Studies. Likewise, the new structure follows the Next Generation Science Standards (NGSS), a U.S.-based group of educators committed to a cohesive and quality scientific education, Assistant Principal Karen Bonthrone said.

Three years ago the administration and science department identified the need to overhaul the progression during their review of the curriculum, as they do every six years.

During this reviews they examined the state of the curriculum and how it reflects the standards for the department, in this case the NGSS.

In that examination, Bonthrone and others questioned and contemplated the new curriculum. “Is this going to serve our kids? Is this going to get kids where they want to go? Are we definitely seeing the things we want to be seeing?” Bonthrone said. “We don’t make these decisions lightly.”

Science Department Head Bill Kenney developed the curriculum alongside other science teachers in all three divisions of the school. Both the Science 9 and 10 courses will include the three core disciplines of science: biology, chemistry and physics. Kenney believes a more thematic approach to teaching science will better prepare students for the world of science today. “The way I was taught, you did biology, you did chemistry, you did physics,” Kenney said. “But real world science problems really involve all the different disciplines together and so what we’ve come up with is a four-semester sequence that makes sense to us in terms of developing our understanding of science.”

The science department finalized the curriculum and schedule for the Science 9 course, but the Science 10 curriculum remains unconfirmed. “In some respects we are building the air plane as we lift it off the ground and try to fly it,” Kenney said. “I guess that’s what schools do in terms of curriculum development.”

With the courses, Kenney envisions a more interactive and lively curriculum compared to the current biology and chemistry courses, where classes consist heavily of lectures. Kenney hopes this will develop a scientist “who understands the role of a hypothesis, has designed several experiments, gathered data, interpreted that data, presented it [and] had to defend it, maybe be forced to go back to the drawing board because the work hasn’t been supported or corroborated. Someone who really has a good understanding of how we generated this information.”

Removing the specific introductory courses to Biology and Chemistry will inevitably result in a loss of some specific understanding of each discipline, but Kenney believes the well-rounded education a student will receive more than compensates for that. “I think we have high expectations for what we want students to know. I think the knowledge someone is going to generate is going to be, I would like to think, more holistic,” he said.

Students currently taking Biology and Molecular Biology must follow the current science progression and take Chemistry next year. The administration and science department has yet to decide how the change will affect offerings for courses in upperclassmen years. “We are starting to talk about the implication of having a two-year integrated science sequence and what that means for the upper levels in science courses,” Kenney said.

All the AP courses in the science department will remain intact and students with adequate pre-requisites, for now, can take AP Physics 1 as a sophomore. “At the moment [AP courses] are not changing, but we do think that’s going to evolve,” Kenney said.

Outside of science, a plethora of electives available in the English and Social Studies departments will change. After sending a survey to students, the Social Studies department added a Topics in Government and Law elective and a year-long Human Rights Seminar. Students in Human Rights Watch seminar will work with and shadow outside organizations like Amnesty International and Humans Rights Watch in order to create their final project, a symposium.

Social studies teachers Chris Wolf and Terry Gladis will co-teach Humans Rights Seminar together. Wolf believes that it has a strong emphasis on the world outside of ASL. “The students would be doing something that would give them a way of engaging with the world. There would be some sort of payout in terms of making a difference in the world and using what you learned to make it better,” he said.

Conversely, the year-long elective on Government and Political Theory will not be offered next year.

In addition, the visual arts department re-structured the photography sequence. Students must now take a Foundations of Photography course before taking Black and White Photography or Digital Photography.