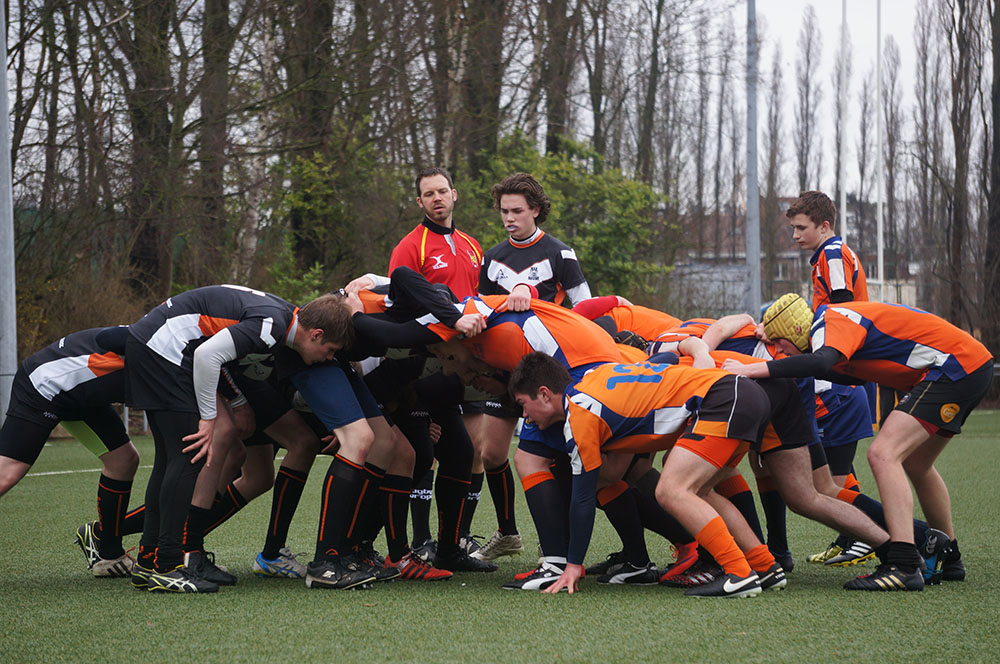 As each year goes by at any international school, sports teams will experience turnover of rosters due to the unforseen circumstances of students leaving the school, and the inevitable graduation of the senior class. Varsity rugby, however, was hit especially hard by this going into their 2016-2017 season.

The dearth of players started to become more of a reality following the culmination of 2015-2016 season, when the team’s members realized that they would need to completely rebuild the team’s roster to have any hopes of competing at the following year’s ISSTs.

Co-Captain Brian Robert (’17) admits, however, that attempts to recruit new players didn’t necessarily materialize until August, when the team met again to begin training for the new season. “We had a small turn out in pre season. Including the JV kids, we had 17 [players]. You need 15 to field a team,” he said. “That’s when it all kicked in that we realized something needed to be done.”

Ryleigh Cornelius (’18), the team’s scrum half, agrees with Robert, and believes that the team should have taken on the recruitment process earlier in the campaign. “We ignored it for a really long time, but once we realized how big of a problem it was we went after more kids,” he said.

Robert, Cornelius and co-captain Oliver Wilson (‘17) attempted to convince students to give rugby a try ahead of the season’s kick off. To the relief of the players and coaches, their attempts were successful, as there were enough names on the team’s roster for them to take the first of their international trips in December to Brussels, Belgium.

Some weeks later, the team’s numbers were once again reduced and players were left scrambling, looking for more additions to the squad. At this point, according to Cornelius, the need for emergency recruitment took center stage. “We had to get serious about it,” he said.

Athletics Director John Farmer admits that a short while before the beginning of this year’s winter ISSTs, he realized that something needed to be done about bolstering the squad, and needed to be done in a rapid fashion. “I met with the team back in December and said ‘Look, here’s the state of the union. We are lacking players, we don’t have a full ISST squad’,” he said.

Following a short period of promise where a group of athletes gave the sport a go and things looked to be resolved, hopes of participation at ISSTs once again diminished when many felt as if the sport wasn’t the right fit for them. “People came for a few sessions and then left, so I met with the captains [and told them] I got an agreement with the other athletic directors to do small [seven] sided games with our team, which would mean having to forfeit the game but at least play,” Farmer said. “That’s not what our players wanted to do.”

Understanding that it was their final time to appear in orange and black on the pitch, both Wilson and Robert, alongside the remaining senior on the team, Andrew Skow (’17), once again set out in hopes of convincing students to attempt the sport. “I was begging friends, pretty much, telling them it was me, [Robert] and [Skow’s]   last chance to play,” Wilson said.

Robert, on the other hand, went for a more long-term strategy, and enquired about the interest of the rugby team in lower grades. “I went out and spoke at one of the sophomore class meetings…  I told them that it’s four or five weeks of a great time, the ultimate team sport,” he said.

Three weeks before the start of the tournament, the team had successfully managed to recruit four senior players in order to fulfill the  quota for a full ISST squad. Farmer admits that he was hesitant to allow the new recruits to be thrown straight into the mix for ISSTs. “It was with great pause that we agreed to [allow them to play]. I totally understand that there could be criticism around this, especially as we have a full fall season of rugby to try and get players ready and prepared physically to be able to play four games in two days,” he said. “As a result, I called the parents of the players [who were recruited], explained my concerns… and made sure that they knew that they are signing up for something that they think is safe for their student.”

Even with a full team, their performance at ISSTs did not meet their expectation according to varsity rugby Head Coach Charlie Hughes, finishing with zero wins and four losses.  “Unfortunately, this year, the team didn’t perform to their greatest ability,” he said. “They underachieved. They had all the physical attributes and the skillset of a good rugby team, but unfortunately something didn’t quite click in their mental state over the ISSTs, which is something that we want to change next year.”

Although Hughes praises the recruits for their dedication to the team, saying that “their commitment was absolutely outstanding,” he acknowledges that starting from scratch less than a month away from a major tournament was far from ideal. “It’s very hard to teach someone a very complicated and skill-based game in about four weeks,” he said.

Regardless of their disappointing stretch at ISSTs, Robert believes that the future ahead for the rugby program is full of potential. “We have a really big group of sophomores who are really solid players, and some good juniors as well who all embody the spirit of the team. [They] love it and they always talk about next season, so the future is bright,” he said.

Hughes agrees with Robert, admitting that the fact only four seniors leaving at the end of the year is a “huge positive,” but believes that there still is a lot of work to be done. “The rugby program is going to change next year in terms of the way we look at coaching, and things within the school,” he said. “Instead of just coaching rugby techniques all the time, we are going to be teaching life lessons; teamwork… commitment … and  discipline.”