Challenging the stigma of legacy 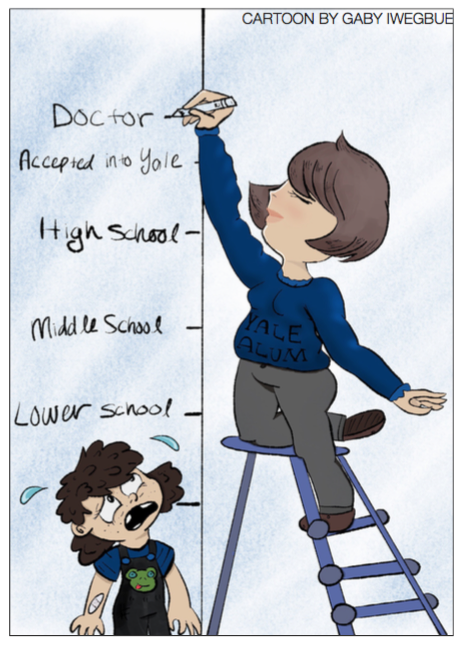 Features Editors’ Ananya Prakash and Quinn Whitman address some of the misconceptions surrounding college legacies and the influence they have on the community.

When Sana Jumani (’19) hears her classmates talk about their connections to prestig- ious universities, she feels a sense of anxiety. “It really is stressful, to be honest. I sometimes feel bad, because I don’t necessarily have a legacy,” she said. Jumani, among many students in the High School, already feels mounting pressure about the college process and the impact legacies have on that.

Jumani believes that her lack of legacy at university leaves a lot of uncertainty in her furture, espe- cially in contrast to other students. “Some of these students already know where they want to go to school and exactly what footsteps they want to follow in because they have a legacy at these schools,” she said. “It makes me feel sad because

I feel like there is something wrong if I don’t know what direction I am going in or if I don’t have some- thing to follow.”

College Counselor Nicole Thompson believes that there is no one answer to how legacy affects college admissions. “It really de- pends on what that relationship is, it depends on the school,” Thomp- son said. “If you’re in a place that happens to have a lot of legacy in your applicant pool, that could have an impact as to whether it’s even used or weighed heavily.”

However, Thompson does ac- knowledge that there are certain universities that “place a lot of emphasis on their alumni because their alumni are very active in the school,” Thompson said. “So at those places they might feel a bit more an obligation to make [lega- cies] part of the process.”

Having previous experience working in admissions at Columbia University, Thompson is aware of the views some universities hold regarding the implications of legacies. “From the college’s stand- point, legacies represent tradition, they represent continuity. They represent people who are really pas- sionate about the institution and want to pass that on to their kids or their relatives,” Thompson said.

Similarly, Luke Bandeen (’17) believes that students who have legacies can often times feel more encouraged to apply to that univer- sity, not because of pressure from parents, but because “naturally the university is more prevalent and more known to you,” he said.

Having a legacy, Bandeen feels he doesn’t always want to openly talk about it. “I guess I’ve always felt a bit uncomfortable because it wasn’t an advantage because I worked hard or accomplished something,” Bandeen said. “It was because I was given it.”

Although it is different for every college and every student, Director of College Counseling Patty Strohm believes that being a legacy can have an advantage if the student is already successful in school. “It gives that little gold dust, that lit- tle star. It is like that frosting on the cake. The cake is the student’s transcript, the application and the standardized testing, but the frost- ing is [the legacy].”

However, College Counsellor Ivan Hauck believes that in some cases, a student might decide where to apply for college based on a legacy, which can be detrimental. “If [a student has] a legacy connection somewhere, there’s of course this idea that ‘oh if we apply here, there might be an ad- vantage of gaining admission’, [yet] itmayormaynotbethebest tofa school for the students,” Hauck said.

Due to this, Hauck believes that to some extent, legacies can be detri- mental. “Sometimes I would almost argue and say that’s a disadvantage because it adds more pressure to ap- ply to a certain school,” Hauck said.

Strohm strongly believes that the most valuable connections that students can form come outside of familial relationships. “Some of your most powerful connections are not who mommy and daddy know,” Strohm said.

One of the biggest misconceptions regarding the implication of a leg- acy that Thompson has noticed in her years of being a college counse- lor is that students assume a direct correlation between legacy and ad- mission. “I think [legacy] is a word that is very, very loaded, and I think people do often come to the process as thinking that legacy is this magic ticket, and automatically that means you’re in the door,” Thompson said. Thompson is also aware of the differentiating views and stigma sur- rounding legacies, especially within the student body. “There are people who don’t feel it is ethical at all to use anything other than merit to gain ad- mission to college,” Thompson said. Thompson also believes to a cer- tain degree, legacies have the ability

to favor the privileged. “As someone who is an educator and someone who is very, very committed to the idea of access and inclusion, I think you can tip over into an area where the pool becomes very small and the circle is closed,” Thompson said.

Aryan Dhir (’19) agrees with Thompson and also believes that this stigma surrounding legacies is present in the school. “People view [legacies] negatively because some- times people have gone to colleges by having a ve generation legacy. They may not have been a good student, so I guess they could be viewed dif- ferently to someone who has worked really hard with limited resources,” Dhir said.

Although Bandeen also recog- nizes that the favoring of legacy students in some colleges not “nec- essarily the fairest system,” he disa- grees with Dhir and believes that “no matter the university, no matter the legacy, they’re not going to ac- cept someone they believe is below a standard they’re willing to accept,” Bandeen said.

Consequently, Bandeen “[doesn’t] think a large majority shy away from a school they think they have an ad- vantage in… If [a legacy] is there and you can use it to your advantage, use it,” he said.

Additionally, Hauck echoes Thompson in that he has also seen the perception of legacies being con- sidered unfair amongst students. “I think sometimes there is resentment and frustration and a feeling that [the admission process] is not a meritocratic system,” Hauck said. However, Hauck believes that there are many intricacies that are involved which students tend to ig- nore. “There is a danger in trying to simplify the concept of legacy,” Hauck said. “I think around here we often take complex ideas such as legacy and try to simplify them into issues that are easy to comment on.”

Consequently, Hauck imagines that this “ends up producing a lot incorrect information” which causes disparities in views. “Sometimes students get frustrated if, let’s say, somebody gets in [to a college] and the perception is ‘oh, they only got in because of legacy’,” Hauck said.

Tania Veltchev (’17) has seen this mentality amongst the student body.

“I think it definitely is a sore spot among people and I think they sometimes struggle with learning how to deal with it and talk about it,” Veltchev said. “If you are someone with a legacy, I don’t think that you will be heav- ily stigmatized or judged for it, but there is an undercurrent.”

Bandeen also believes that these comments stem from student’s insecurities and the mounting pressure of college in the High School. When people say a legacy was the sole factor in a student’s admission, “for a lot of people, it’s their way of dealing with certain things,” Bandeen said. “Maybe they applied to the same school and they didn’t get in…and they’re trying to nd a way to equalize that in their mind.”

The stigma surrounding legacy is one that Strohm believes can af- fect a student signi cantly. For students who get in to schools that they have a legacy in, Strohm won- ders if “they worry that they are children of mommy and daddy and that they weren’t smart and com- petent” enough to get in without a legacy. “We need kids to feel smart and competent because [they] are,” Strohm said.

Jumani believes that students feel worried to continue a legacy in order to fu ll the mark their family has on the school. “If your family is associated with a university for whatever reason… it puts a lot of pressure on a student,” she said. “A lot of students feel, ‘I have to contin- ue my family’s legacy that my family pays money for’.”

However, Strohm believes that the stigma goes beyond interna- tionalization amongst individuals, and in uences the community as a whole. “I think too much worrying about unfair advantage can really poison a community and it can re- ally hurt a class,” Strohm said.

Veltchev also believes that this mentality can have negative connota- tions among the community. “I have heard before, ‘oh, she completely didn’t deserve to get in it was just be- cause of her legacy’,” Veltchev said. “I have even heard people say they de- served to get in more than someone else because they don’t have a legacy and the other person does and they think they are the better student.”

Furthermore, she believes that whether a student is a legacy or not, it all comes down to individual mer- it. “I don’t feel like people are let in with a legacy if they don’t deserve to be there. If you have gotten in, you have gotten in on your own merit, not on your legacy,” Veltchev said.

“I think students should stop wor- rying about legacy and start re ect- ing on who they are and what they want to be,” Strohm said. “I worry that people aren’t thinking about what matters. What matters is you learning and growing and becoming good people.”