Ally Larson: Inside and outside of the pool 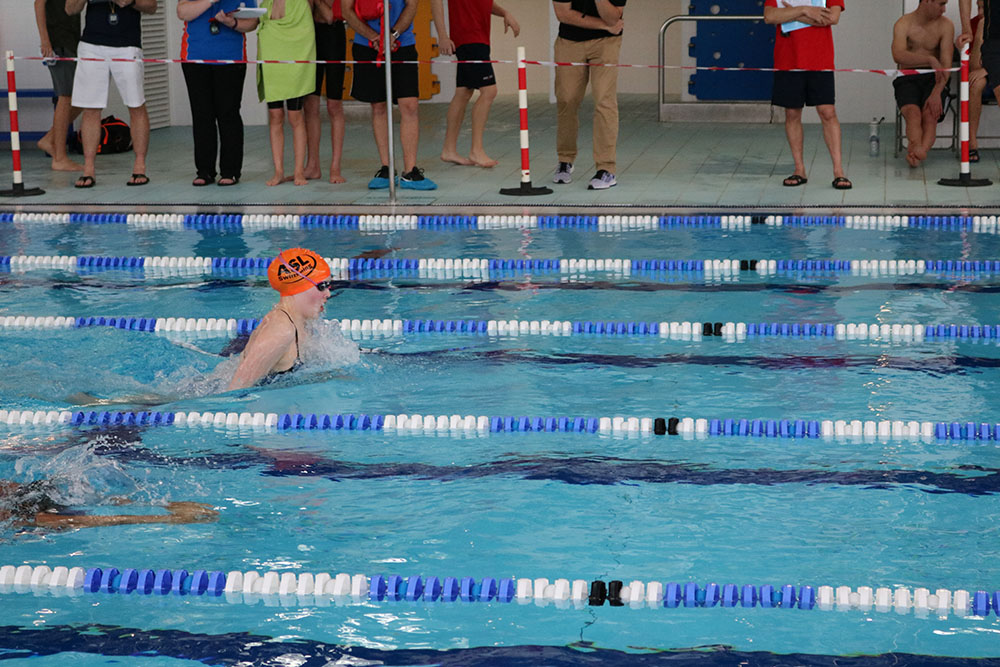 After a successful meet or a stressful day balancing swim, school and a social life, Larson celebrates both the annoyances and perks of swimming on her Instagram account, @caps.n.goggles. “It’s a way to express both my love for swimming and things that annoy me and things other swimmers can relate to,” she said.

If Larson is ever annoyed at something during practice, she posts a humorous photo on her account, such as “Balancing swimming, school, sleep and a social life is literally impossible” and “Don’t you just love those weekends when all your friends are out having fun & you’re just stuck at a 10 hour meet.”

After each post, Larson feels a sense of gratification from swimmers’ responses and tags of their friends.  “It’s nice to see that all of these people share a common interest and can relate to the things I post,” she added. Larson currently has 30.5k followers, getting over 4k likes per post.

Larson began swimming when she was 9, but became more competitive when she was 14 and taller. “I didn’t really grow until later on, so I guess it took me a bit to catch up,” she said. 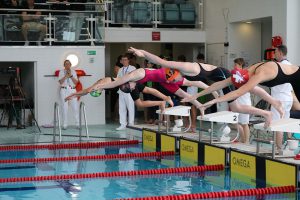 Despite occasionally getting tired of attending many practices in a week, Larson always finds motivation to return to training and
never feels like quitting swimming. What brings Larson back to swimming is “every time I have a successful meet and is happy with my times, I feel good about it and it motivates me to continue to train harder.”

Larson moved back to the U.S. for Grade 8 and the first semester of Grade 9. She noticed a difference in the training between the U.S. and U.K. “When I went back to the U.S. I got a different style of training that helped me improve a lot.” However, she believes that she improved the most when she arrived back in the U.K. after spending a year and a half in the U.S.  “[However], my most improvement was after I came back [to the U.K.],” Larson said.

She describes the difference between U.S. and U.K. training an outcome of the swimmers’ aspirations. “In the U.S. it’s a lot more competitive and more people are looking to continue swimming in college, but in the U.K. a lot of people don’t swim in college if they go to a U.K. university. And people take academics a lot more seriously than swimming [in the U.K.],” Larson said. 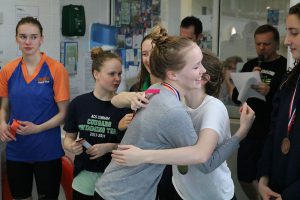 Larson hopes to swim in college, but due to living in London, it is harder for her to be noticed by college coaches. “I definitely think it’s harder because I can’t go to U.S. nationals or those meets because I’m not there. That’s where a lot of coaches see the swimmers,” she said.

Until then, Larson will continue to swim for the ASL swim team and for the Camden Swim Club outside of school. “I really enjoy the ASL swim team because there is a lot more emphasis on the team. We all cheer for each other. I think that’s why we’re always so successful at ISSTs.” she said. “Whereas at Camden Swim Team, you have to motivate yourself and there’s not as big of a team atmosphere.”

Outside of the pool, Larson continues to explore her passion for the sport through the realm of social media – specifically Instagram. She posts humorous posts daily that relate to swimmers’ general feelings towards swimming. “I saw how at the time there were a ton of accounts that most people can relate to, just funny accounts to relate to, and I thought it’d be interesting to have one just for swimmers to relate to,” Larson said. 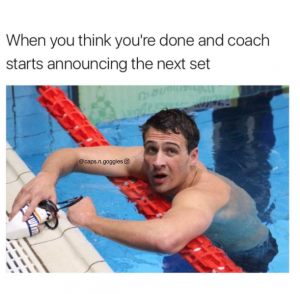 Although the account doesn’t affect her swimming, Larson gains most of her inspiration [for her posts] from practice. “It’s mostly just like if I ever am annoyed at something during practice,” she said.

Despite having more than 30,000 followers Larson has, most of her peers do not know about her Instagram account. People on her swim teams know, but Larson has not placed her face or name on the account. “I want to make it more for a community of swimmers and not necessarily one person who is the face of it,” Larson said.

Maintaining this Instagram has propelled Larson to consider the future for her account, but also herself. “Recently I have had companies reach out to me about it and ask me to post something and I’ll get paid. I’m hoping to continue with that. But again [making money] doesn’t really matter in the end because I’m just having fun with it,” she said. “Being on Instagram made me realize I want to pursue a career in marketing when I’m older.”