The man behind the network 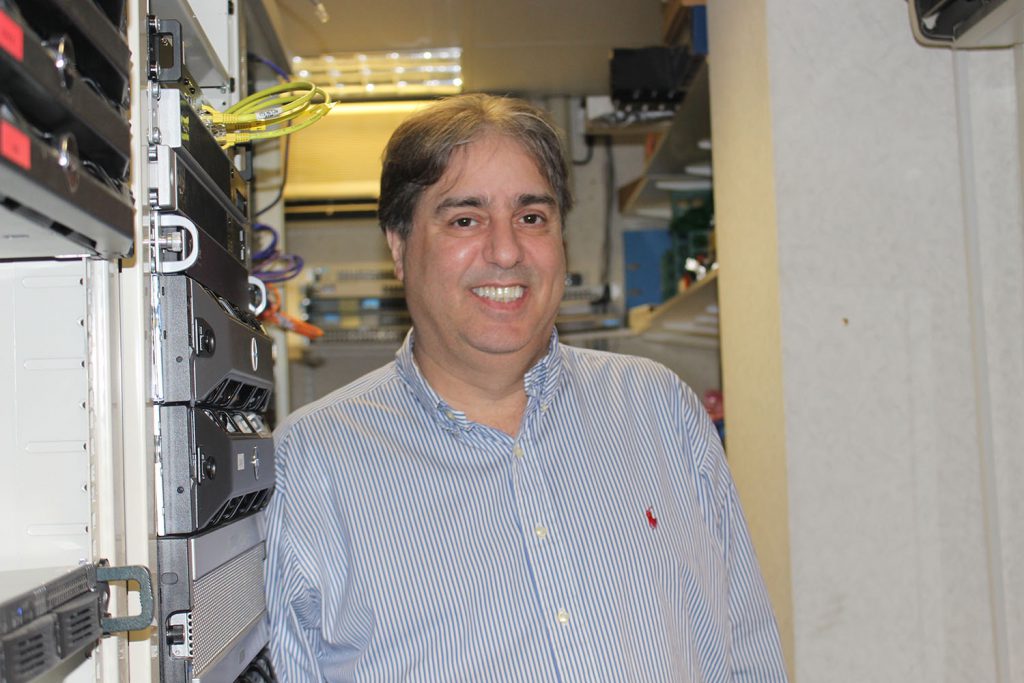 In the Server Room behind the Technology Offices sits the Core Network, the central access point of all school systems, connected by a tangle of cables, all which have been meticulously plugged in by Network Administrator David Moses.

For 18 years, Moses has worked behind the scenes in the Technology Department, responsible for the maintenance and management of all school computer and internet systems. “There are many things that I do which [are] rather invisible,” he said. “Generally from a day to day basis I’m a pretty unknown face … people don’t really know that there is somebody back here.”

After his long career at ASL Moses will be retiring at the end of the school year, and plans to leave alongside his wife, K2 teacher Diane Weissman, who is also retiring this year.

As Network Administrator, Moses monitors the entire school network, is in charge of repairing any damage to the system and works to ensure there is constant internet connectivity throughout the building.

Passionate about technology since he was a child, Moses recalls dismantling clocks and wind up toys to learn how they operated. “I was a kid that used to love to figure out how things worked,” he said “I would to wait for things to break so [I] could open [them] up and fix [them].”

Moses started working in the electronics field immediately after his graduation from high school. “I knew straight away from school that [technology] was what I wanted to do,” he said. “I didn’t go to college, I started working when I was 17, which is why I am retiring early.” Moses first worked in an apprentice position in electronics whilst going to a daytime college at North London University one day a week to gain appropriate qualifications.

After working as a TV repairman, Moses worked in Israel for nine years in a microelectronics field before returning to England to take classes in computing. As Moses was finishing his courses and looking for work, a position became available at ASL for a PC support specialist and he was hired in 1999. “I was really lucky, I was in the right place at the right time,” Moses said.

After acquiring the role of PC support, Moses’ position transitioned to Network Administrator.  When the previous administrator retired, ASL had difficulties hiring a replacement, allowing Moses to temporarily step into the role whilst still working as PC support. As Moses progressed in this role he was able to combine both jobs and was officially given the title of Network Administrator in 2002. “I didn’t actually apply for the job at the time but I just seemed to have grown into it and here I am all these years later,” Moses said.

Moses is in charge of administering the complex school internet system. There are nearly 200 internet routers within ASL, constantly sending and receiving wireless signals. “Every single piece of information that’s transmitted in the school that goes in or out the building goes through the [Core],” Moses said. “You can basically say that the Core here is like your router at home but we are just dealing with many more connections and many more people.”

One of the final projects Moses has been working on is installing a secondary line for the school internet, “There will be two internet routers  coming into the school and if there is a problem with one, it will automatically fall over to the secondary one,” Moses said. He hopes this will mean losing connection in one of the lines will have no effect on the school. “The internet now, it’s a lifeline, it’s like oxygen for ASL,” he said. “It’s really vital that we have a reliable connection.”

One of the main challenges of the job is continuously working to keep the system running without fail, even after hours. “We tirelessly work to keep services up and running 24 hours a day,” Moses said. Even though he has built a robust system over the years, Moses is still required to work out of hours if a problem occurs. He has applications, which will alert him by text if there is a problem. “I am unofficially on call 24/7,” he said.

Moses recalls one particular instance in 2005 when one component of ‘The Core’ had became faulty. “I was here all night with an engineer and I left the following morning at eight o’clock,” he said. However Moses views having to work long shifts as “part and parcel” of his job. “[It’s] just part of being an associate at the school and knowing that it’s vital that systems are up,” he said.

Moses enjoys working at ASL as there are constantly opportunities for new projects. “Every time I finish with a large project, I need to think, ‘Well, what next?’,” he said. “There’s always things, there’s always projects that just keep on evolving.”

Moses views retirement as “bittersweet” as he will greatly miss spending time with his work colleagues. “It will be hard not seeing these guys on a daily basis because I’ve spent more time with them than family members.” He said. However he is excited for what retirement has to offer. He plans to travel to and visit family in both Israel and the United States in his retirement. “I started working when I was 17 years old,” he said. “I had to grow up very quickly and things that I didn’t do in my teens and early twenties I intend to do now.”

As he finishes his time at ASL, Moses is proud of the efficient and reliable network he will leave behind. “The biggest achievement has been coming here as PC support and leaving this place with a fantastic network that is secure and robust and good for the future,” Moses said.