In paper we trust 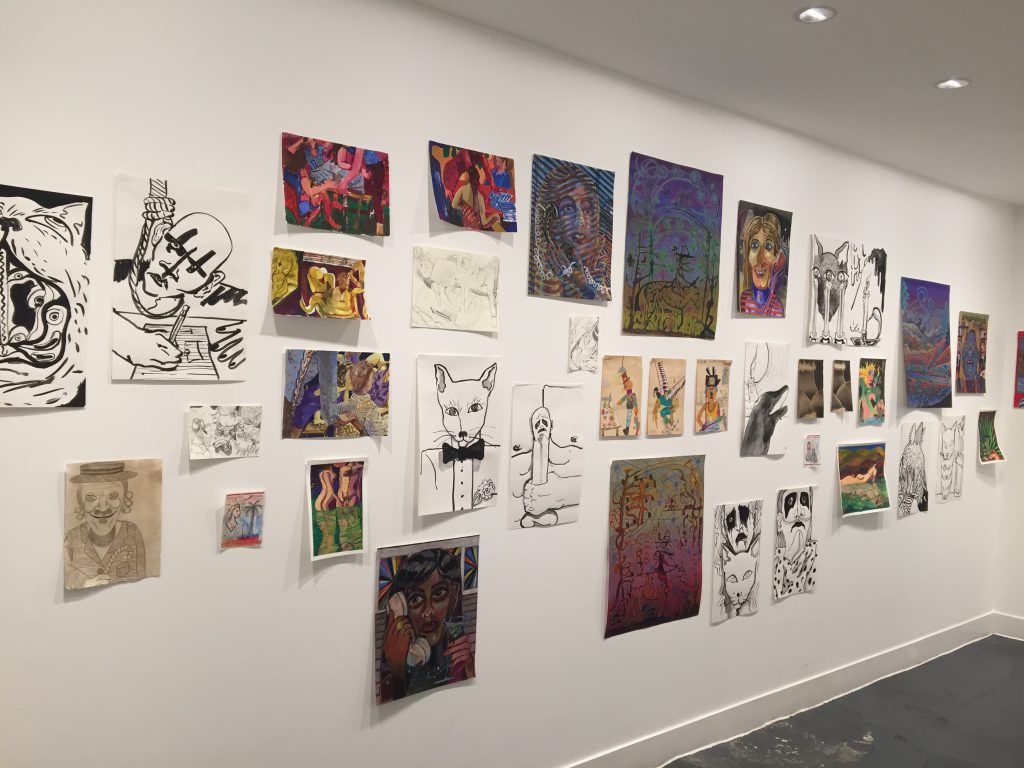 The pieces of paper with their bursts of color and striking statements were scattered across the white walls. Sun poured through the windows, drawing attention to even the smallest details of the paper, serving as an introduction to “In Paper We Trust”, an exhibition organized by the Dot Project, a gallery that focuses on showcasing emerging contemporary artists. The exhibition houses distinct pieces that are only on paper in order to move away from the frigidness of framed pieces. 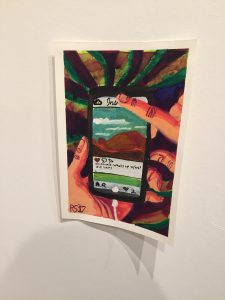 One of the main themes of the exhibition was the impact phones have on society. The creations began with people talking on home phones, such as “British Susan Says ‘Hello, Dear” by Bruna Massadas and then evolved to people speaking on mobile phones, “Will Grace Answer Giorgio’s Call?” by Massadas and, finally, the hands of someone holding a smartphone with an Instagram feed. The painting of the Instagram feed, “Scrolling Reality” by Ryan Schneider, solely shows the hands of the individual, rather than their face, representing the distance that technology places on communication.

I realized that the paintings in this series held a truth that I didn’t want to confront; the more we accept technology and integrate it in our lives, the fewer meaningful interactions we will have with people. The evolution of the phone in the artwork showcased how much humanity has changed in the last 20 years. When I saw the image of just the hands holding the screen I wondered what would be next for how people will use technology.

The exhibition also featured political pieces, such as a large painting with an explosion of a meteor and the phrase “the Trump asteroid” (also the title of the painting) written underneath. This was the most overt piece in the exhibition with the artist, Judith Bernstein, revealing her political opinion. This piece certainly impacted me as it reminded me of President Donald Trump’s recent decision to end the Deferred Action for Childhood Arrivals (DACA) program, an immigration policy established by President Barack Obama, which allows some individuals who entered the U.S. illegally as children to receive eligibility for a work permit and deferred action from deportation. The painting reminded of the devastating effects it could have on families across the U.S. 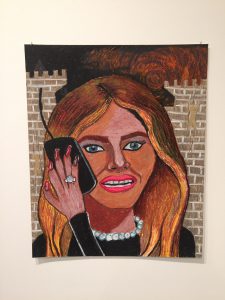 “Melania Speaks to Secret Service” by Massadas also referred to Trump, depicting First Lady Melania Trump speaking on a phone while standing in front of a brick wall. The piece referenced Trump’s infamous proposal to build a wall across the southern border of the U.S.

The gallery was able to explore an array of topics in only a few paintings, showing that a single piece of paper holds limitless possibilities.

Written by and Photos by Culture Editor Phaedra Letrou (’19)