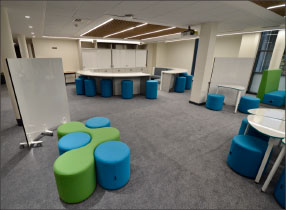 As students walked through the hallways surrounding the Science Department at the start of the year, they were met with entirely new science facilities. Replacing the former science classrooms, updated lab spaces, a redesigned office and a new student research lab were installed over the summer. Additionally, the new Learning Commons and Computer Science classroom opened for student use on September 25.

The final piece to the New Frontiers campaign, the science renovations had been under discussion for the past two years as the administration examined the needs of the facilities.

The construction process was  substantial as all of the floors, ceilings and most furniture has been replaced. Ed Toovey of Ed Toovey Architects, was the architect on the project. Toovey previously designed the reconstruction of the Middle School science wing and the Commons.

Director of Operations Jim Heynderickx believes that the most challenging aspect of these renovations was constructing the plumbing infrastructure from the octagonal lab benches and pedestals. The pipes and wires for the gas, water and drainage had to come through the floor of the science rooms in the third floor. In order to construct theses pipes, the ceiling in the second floor had to be taken out. “Taking out all the ceilings in the Head of School office, Admissions and the Mellon Library took twice as long as expected because when they took down the ceiling tiles they found it was going to be a lot harder to run the pipe work around all of the existing services.”

As a result of these renovations, the new facilities are more spacious with mobile furniture which meets the needs of the Science Department. “There was a request from the science faculty [to have] lighter and brighter and also would like to have more floor space,” Heynderickx said. The previous fixed black top counters and cabinets have been replaced, to provide more space in the labs.

Science Department Head Andrew Ringham believes that these changes were needed to fit the new ways of teaching in the science department. “We identified as a faculty that the facilities weren’t providing the flexibility in learning spaces that we really wanted,” Ringham said.

Straying away from the previously lecture-focused classes, the science department is now incorporating more group work and practical elements into their lessons with the new spaces. “We wanted  a much more flexible collaborative environment for the science labs than we had before,” Ringham said.

Ringham believes that the fixed nature of the original facilities made it difficult to adjust the classroom for different lessons. “That provides us with the opportunity to try different things and to really develop different ways of using the space,” he said.

Science Teacher Deb Luheshi appreciates the mobility of the new furniture in her own classrooms. “In the physics lab… there is definitely a difference, we can move things around a lot more easily,” she said. “It’s going to be easier to facilitate group conversation and more of a collegial atmosphere within classes.”

Ringham describes the Learning commons as “the scientific answer to the Make Innovate Learn Lab (MILL),” a large open space for students to work on experiments, collaborate on projects and present designs and ideas. The space will be used during science classes but will also be open for students to use during their free time. Inside, there is furniture which can be moved around depending on student wishes, seminar seating, and large double sided white boards. “We are curious to see what high school students think of the new furniture being a lot different to what we had on campus before,” Heynderickx said.

Another new addition is the research lab where students can carry out experiments outside of class time. “It’s really a space that’s dedicated to student-driven inquiry,” Ringham said. This will be a single lab used for independent student work, and there will be no classes scheduled in it.

One student who is looking forward to the new facilities is Ali M. Ahmed (‘18), who, alongside Lucas Pabarcius (‘18), is doing an independent study designing a hybrid rocket motor. Although he will be using the MILL to build the rocket, Ahmed hopes to use the research lab and Learning Commons to collect and measure samples and to run tests. “We are probably going to get test equipment from [Andrew] Ringham and use that in the new facilities so we can actually test our rocket there,” he said.

Ahmed looks forward to working in the new facilities as he believes it will give students a designated area where they can conduct scientific research. “The idea of having a research facility area, that’s really new, that’s cool because we have never really had that before so, instead of just going to the MILL, we actually have a science area where we can [run tests].”

Although it may take time to set up everything, Ringham believes that the facilities will provide teachers with an opportunity to try new and innovative ways  of teaching. “Before the facility was really a limiting factor and now it’s not,” he said. “I am excited for what the future holds for us in the Science Department.”