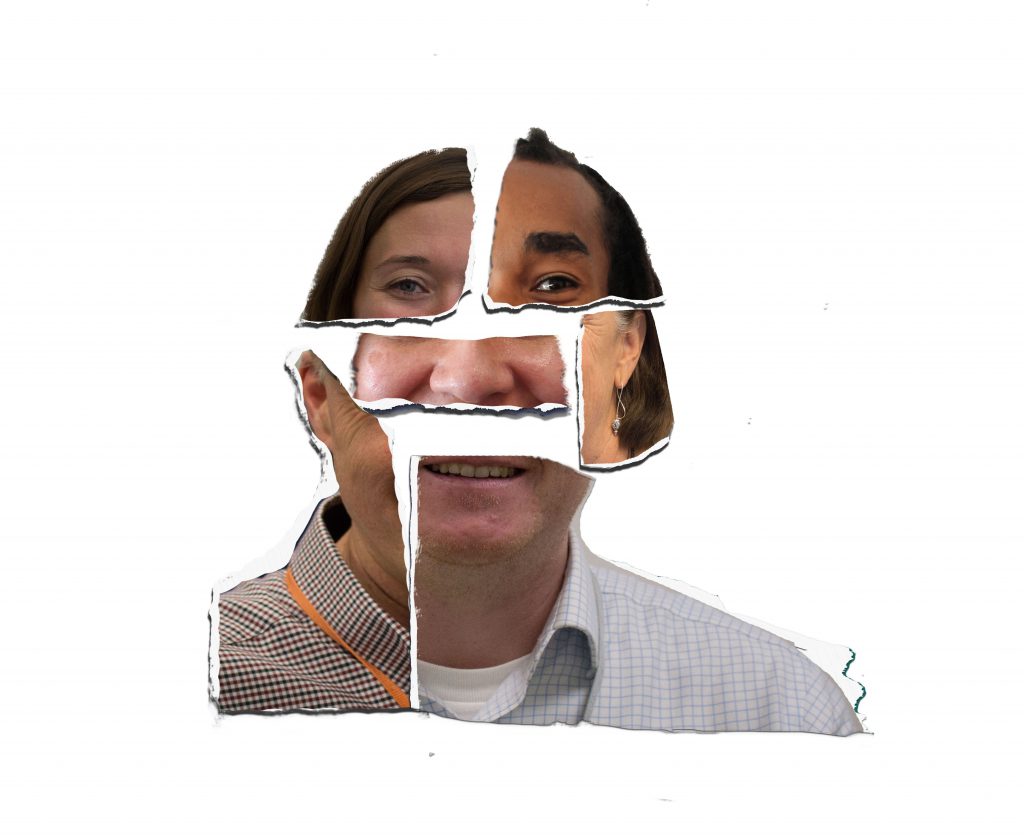 During Math Teacher Doug Poggioli’s first year at ASL in 1999, he made one promise to himself: He would be open regarding his sexual orientation. Happily married, Poggioli is open about being a gay teacher and has always felt accepted in doing so. “The school welcomed me from the very first day… and I’ve never felt in any way it’s been a problem,” he said.

At his previous school, Poggioli felt his sexual orientation was a private matter. Upon arriving at ASL, he felt this contradicted what he encouraged students to do. “How can I tell a student ‘you should be proud of yourself. You’re not going to feel threatened by anybody. Life is going to be OK that you’re gay, that you’re not cisgendered’,” he said. “How can I say that if I myself am embarrassed?”
Diversity amongst teachers
Returning to the Science department after a two year leave of absence in 1998, Science Teacher Jude Ruff noticed she was the only woman in the Science department. Although now she feels supported by her entire department, back then she heard a lot of sexist comments. “I had to do a lot of pushing [back] for the kind of jokes that weren’t OK,” Ruff said.

As a woman in science, Ruff acknowledges she is in the minority regarding diversity of gender. “I think we females [in the Science department] have always worked in male-dominated spaces so I think there’s a lot of adapting that we do,” she said.

Interacting with other female-dominated departments, Ruff notices a different atmosphere. “There’s a different feel in the departments that have more women,” Ruff said. “I think of it as warmth… whereas we are very professional and we’re very collaborative. It’s not a problem for me, but that’s not to say I wouldn’t enjoy that [warmth].”

Throughout his many years at the school, Poggioli has constantly felt supported by the administration, especially with the creation of the LGBTQ+ affinity group for faculty and staff. “This is an actual group that the school has formed and they want us to talk to each other,” he said. “When new teachers come in, new people come in, we invite them so they know that this is a safe place for them.”

Grade 9 Dean Neil Basu, who is in the people of color affinity group, believes the groups empower teachers. “Affinity groups always serve a purpose for giving marginalized voices a chance to find each other, share experiences and be able to have an impact in a clear and positive way,” Basu said.

However there are no affinity groups presently for religious identity. Although Basu feels he can share his Hindu beliefs, he finds there is not much knowledge of his religion. “The understanding or awareness of Hindu cultural holidays or standards is lower than I would have expected,” Basu said.

English Department Head Eve Ellis believes she is able to share a lot of her identity with her colleagues. Part of this familiarity comes from teaching at ASL for many years. “As someone who has been here for a long time, that in a way definitely increases my comfort,” she said. Ellis also attributes this comfort to being part of the dominant racial group, which she recognizes shapes her perspective and experience at the school.

Knowing this, Ellis and the rest of the department are increasingly mindful about their shared perspective in relation to the English curriculum and various student identities. “We want to be really conscious and thoughtful about ways in which we have a very broad perspective and ways in which, if we’re not careful, we might have a very limited perspective,” she said.
The hiring process
Various identities are essential to fulfilling the school’s mission statement, said Human Resources (HR) Manager Megan Gomm, who recruits new teachers. “Without diversity, that global perspective is not there,” Gomm said. “I think we recognize that diversity, the multiple experiences, is essential to [providing] a well-rounded education.”

The current process for hiring teachers ensures that in each pool for new faculty and staff, there is a candidate from a minority group as a finalist in every search. “That under-represented group might be a cultural background, an ethnic background,” Gomm said. “It might be that we are hiring in the Lower School and we see that there are way fewer male primary school teachers… [and] we want to make sure we have a male in this pool.”

Ensuring a more inclusive hiring process, the school launched a cultural competency committee for hiring, which includes a diverse base of teachers, support staff and HR personnel. “We get together and we strategize ways we can increase diversity amongst our faculty and staff,” Gomm said. “For example, we are working on bringing data to the committee to show the groups of people we are both interviewing, hiring and how we are retaining people.”

Basu works on the cultural competency committee and is a member of the Diversity Leadership Team along with Grade 1 Teacher Jennifer Abastillas and Grade 7 Social Studies Teacher Darnell Fine. This team often works alongside Director of Teaching and Learning Robyn Chapel, the principals of the three divisions and the Head of School.

Since its creation during the 2012-13 school year, the Diversity Leadership Team have taken numerous initiatives to improve cultural competency, the set of behaviours and policies that allow an organization to work proficiently in cross-cultural situations. “We’ve done a variety of different things, like working with faculty, the entire [group of] 350 people who work here, as well as people in our divisions or small teams,” Basu said. “[We] try to identify people who can be leaders in their own areas and have done professional development work with teachers. [We  have also]  done a lot of work with students in different ways and are beginning to do some of that with parents as well.

Recently, in another attempt to improve the school’s diversity, the administration created an organizational health committee, which comprises members of faculty, staff and the Head of School. One responsibility of this group is to scrutinize the recruitment practices as they relate to diversity.

This year, the HR department plans to create an online application and system to monitor and present their data. For Gomm, initiatives to maximize a diverse faculty is a continuous process. “We got to keep going. It’s not something you can say, ‘we’re done now, we solved it’,” she said. “It will always be growing and evolving.”
Effect on students
Surrounded by white peers and teachers, Houdah Daniels (’20) immediately noticed a lack of racial diversity in the Middle School. “There were maybe one or two black teachers and [as a student of color], I was a bit timid. I wasn’t as comfortable,” she said.

However, to Daniels, diversity also includes diversity of thought, a component she believes ASL excels in. At the school she previously attended, Acton High School, she saw more racial and ethnic diversity, as well as more cultural diversity, but all teachers taught under the same style and structure. “Something I value at ASL is all my teacher’s [teaching styles] are completely different,” she said.

Similar to Daniels, Maddie Douglas (’19) sees a contrast between her old Christian school and the environment here. A new student this year, Douglas feels she is exposed to a range of faiths. “At my old school there were a lot of [teachers] of the same faith who had the same belief system, the same views on current events,” Douglas said. “Here ASL is a lot more diverse and I have seen it is better to have a diverse environment than be in a little bubble.”

For Douglas, an open environment cultivated by teachers allows her to further her understanding of other faiths. She believes it is important to be exposed to different beliefs, as it allows her to not only appreciate varying viewpoints, but reaffirm what she believes in.

Former student Declan Wicks (’19) believes opinions are formed at a young age and having teachers of different backgrounds is essential in shaping open minds. “Having a diverse staff is the best for kids to learn that it doesn’t matter what you believe in or what you are, you’re still a person,” Wicks said.

Despite this, Wicks felt he did not have many teachers that could relate to his experiences of being a student of color. “Since there are so few black teachers that you know, it’s hard not to have someone who you see regularly, who you can share stuff with if you’re having problems and you need to go to an adult,” he said.

Trying to connect with teachers outside of a classroom setting is not always easy for Daniels as well. “If there were more black teachers or there were more teachers that were British or of dual ethnicity, I would feel like I could connect to them more in a sense that outside of the classroom, outside of questions about the homework, I could have a conversation with them and relate to them,” she said.

Math Teacher Livia Santos agrees with the importance of students knowing they have a teacher with similar identifiers to turn to. “At ASL I think it is even more important because [students] are coming in from different parts of the world, and [faculty] are too, and so we identify with each other,” she said.

Yet again, Ellis agrees and acknowledges how crucial it is for students to have themselves be represented through their teachers. “I think it’s hugely important for [students] to find someone in the community that they can look to and say, ‘I see critical aspects of myself reflected in that adult in the community and I have someone that I look towards as a role model or as a figure of support’,” Ellis said.

By being open with his sexual orientation, Poggioli hopes to guide students to do so as well. “I wanted them to see that there are gay teachers who are completely upfront. There’s a picture of my husband on my desk. I want to model the kind of things that I’m telling them,” Poggioli said. “If I can make students feel less afraid that the world will accept them, that’s a good thing, I think.”