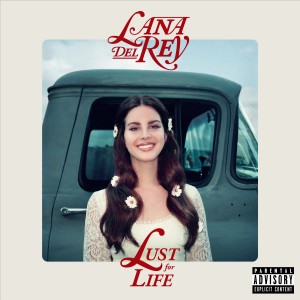 Walking through the tube station, still with my headphones plugged in, I stop abruptly as a swarm of Londoners shove past me and make their way onto the Jubilee line at Bond Street. In front of me is an ad for “Lust for Life”, Lana Del Rey’s new album. I gaze at the poster in awe as I see Del Rey displaying a large grin on her album cover, instead of her distinctive melancholic expression. With this subtle clue, Del Rey makes it obvious that this time, her return to the charts is going to be different.

Making her debut in 2012 with the album “Born to Die”, Del Rey has since kept a constant and reliable style to her music throughout her career. Her own take on indie 70’s rock mixed with contemporary lyrics makes her a refreshing contrast to the pop artists often featured on the radio.

In her following albums, 2014’s “Ultraviolence”, and 2015’s “Honeymoon”, Del Rey stayed loyal to her distinct style as her music rarely transformed or changed, keeping her signature pensive and melodic beauty in every album.

“Lust for Life” is not like any of her prior albums. There is more than just a beautiful melody in her songs. The tone of the past is still present in her music, with her art deco videos and vintage melody.

Nevertheless, her music now is mixed with lyrics and beats that are present in modern rap songs. The lyrics of her new album still focus on the same ideals, desires and themes of her past songs, yet this time, they are altered and evolve with the addition of references to modern pop culture.

For the first time, her album features a diverse list of artists from many different genres and periods of music, including the Weeknd, A$AP Rocky, Playboi Carti, Sean Lennon and Stevie Nicks. This expansion in genres of featured artists clearly symbolizes Del Rey’s embrace of modern pop music that is mostly dominated by the rap and contemporary artists that are featured with her in the album.

With all of these changes, it seems as if she has finally moved on from the contemplative, yet alluring music from her past and onto a refreshing new outlook of music and life, where it was just “enough to be young and in love”.

Del Rey’s most influential songs from the album, “Love” and “Summer Bummer”, both embody her past ideology and style while still incorporating aspects of modern pop songs. The two songs, although from the same album, are vastly different in their style due to different techniques Del Rey used to compose them. While “Love” has a more eerie and exuberant feel with its vintage tune and contemporary lyrics, “Summer Bummer” is a bit more eccentric with its pop rhythm, beats and rap verse, which makes the song an unconventional yet compelling substitute for Del Rey’s usual style.

Regardless of their differences, the two songs still embody Del Rey’s new ideology. Her music has evolved and blossomed in the cradle of the new era of contemporary music, creating a beauty that moved on from her pensive angst and onto a new era of music that cherishes the past while accepting the future possibilities. As I listen to these songs, I see the smiling girl with flowers in her hair who was posted across the album cover.