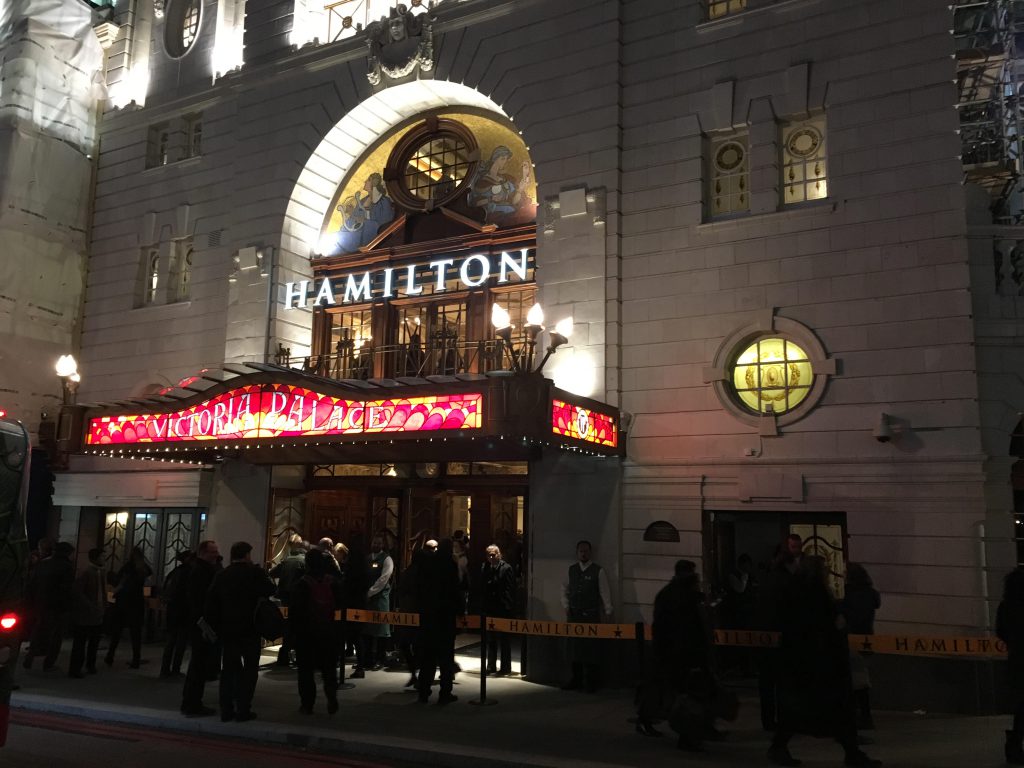 Katya Smith (’19) plugs in her phone and starts to play the Hamilton Soundtrack. She sings along with the music as it transports her back to the 1790s. Smith is an avid fan of Hamilton, despite not having seen it yet. She is planning on seeing the show in London in January.

She believes the success of the Broadway cast recording of Hamilton led to more commercialization of the music industry. “Musicals can be written in a way, where you can listen to them all over the world, having never seen the show and still understand context,”  she said. Smith believes the musical has the capability to influence even those who have not seen it live.

Smith believes Hamilton has changed how people view history and thinks it opens up topics of controversy, such as immigration and slavery, by incorporating it in a medium more relevant to today. “The show has lead to a lot of conversations about immigration reform, about racism in the united states, and other forms of social activism,” Smith said.

The musical, which opened on Broadway in 2015 and opened in London last night, 6 December, is based on the life and story of Alexander Hamilton, America’s first Secretary of the Treasury, as well as the people that surrounded and influenced him throughout his life. Hamilton’s story is told through the eyes of his enemy, Aaron Burr. The show incorporates several music styles, ranging from rap to ballad.

?What a phenomenal response to tonight’s first performance. You’ve blown us all away. #HamiltonLDN 📷: @murphymade

The creator of the production, Lin-Manuel Miranda, chose to cast the American characters in the musical as people of color in an effort to showcase diversity within the musical theater industry. Smith believes the musical “has brought a stronger focus on social activism” and has done much to “educate people on race in the theater industry,” she said.

Maxmillian Olsher (’21), who saw the Broadway production believes Hamilton to be “one of the most influential shows of all time.” By specifically “focus[ing] on the story of someone’s life,” Olsher finds the musical a creative way to teach history.

Social Studies Department Head Natalie Jaworski, who has not seen the production but is planning on attending this summer, has been using different versions of the title track to teach her AP U.S. History students. “I think [the musical] helps humanize the founding fathers,” Jaworski said. “I’ve always found that it’s helped students to engage with the material more.”

Jaworski uses the track in her classes in order to observe points of view and analyze how Hamilton was involved in the creation of the United States government. She believes it helps the students understand what the formation of a new nation was like, and thinks this incorporation can alter the environment in her class. “It’s making learning about that time period cool, which it certainly wasn’t for a long time,” she said.

Marina Pavoncelli (’18), who grew up in the English education system, only started to learn about American History in Grade 8, after she transferred to ASL. She describes her exposure to the subject in Grade 8 as “crash-course-y.” However, when the unit about the founding fathers started in AP U.S. History, she felt prepared, having listened to endless hours of the musical’s soundtrack beforehand“[the musical] got me through my AP U.S. History exam,” Pavoncelli said. “The information is accurate, and it summarizes key points of American history at that time.” Mackensie Kim (’21) who saw Hamilton in New York, echoes Smith, believes the casting selections were a positive aspect of the play, using a medium of actors to portray a message greater than the play alone. “The casting choices were very deliberate, and it highlights broader issues that aren’t just about Hamilton,” Kim said.

Both Smith and Kim equally think the casting has helped Broadway become more inclusive when it comes to race and ethnicity.

However, Olsher believes the casting choices should not be forced due to the color of the actors, feeling like a “naturally diverse cast” makes the production more sincere and authentic. This unintentional racism was evident when Hamilton’s casting team faced a harsh backlash in early 2017, with the press stating the show’s casting decisions were not consistent with the regular casting choices of Broadway.

Quotes from the musical were also used as points of discussion during the various Women’s Marches throughout the U.S. and Europe earlier in the year, as well as the U.S. Presidential Election in 2016. This consisted of quotes like “History has its eyes on you,” and “Immigrants, we get the job done.” Both of the presidential candidates referenced the famous “Not throwing away my shot!” line during the Republican and Democratic National Conventions.

“Hip-hop in historical theater was not typical until Hamilton,” Smith said. The musical has brought a wider range of musical tastes to the theater industry. Smith describes the music as “pushing the boundary of what is and isn’t ok,” when talking about the musical style of Hamilton in relation to the topics it covers.

Both Smith and Olsher think Hamilton influences people of all entertainment tastes and you don’t have to love musical theatre to love the show. Since the show and its music are so well known Olsher believes “you don’t really need to be into musical theater to know Hamilton.”