Junior presented with Capital One Pay It Forward Award 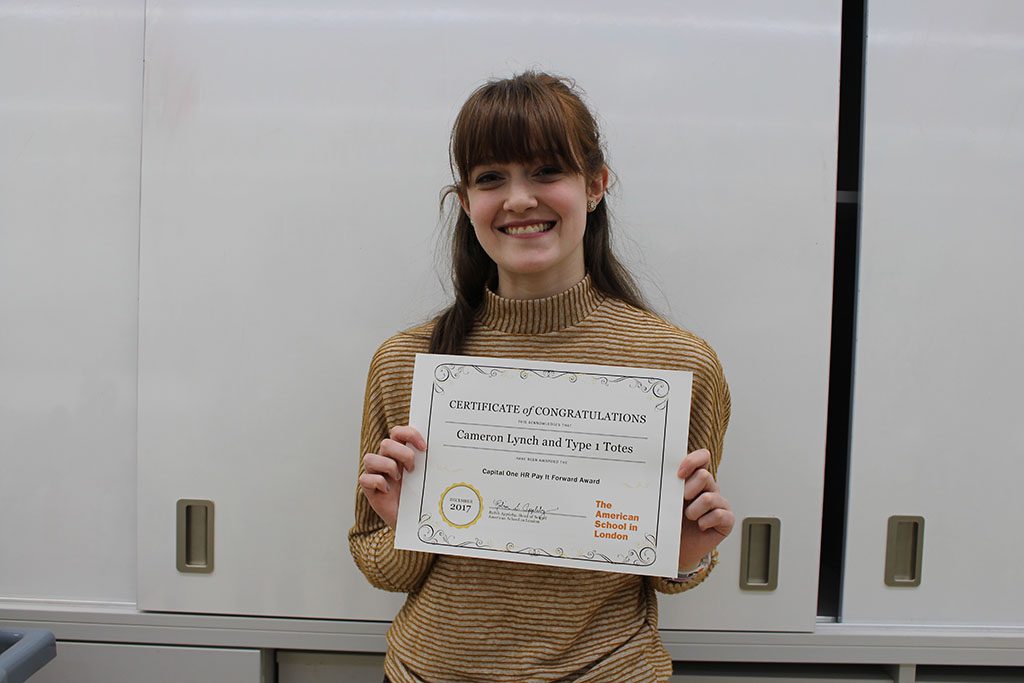 Cameron Lynch (’19) received the Capital One HR Pay It Forward Award in the amount of $3,000 to fund the organization she formed to support children diagnosed with Type 1 diabetes. According to the National Health Service (NHS), Type 1 Diabetes is a lifelong condition that causes a person’s blood sugar to become too high. Lynch was nominated by her father, who works at Capital One, for the award, which recognizes people who change the community to make it a better place. Head of School Robin Appleby presented Lynch with a recognition of the award during lunch today.

Since her diagnosis of Type 1 diabetes in Grade 2, Lynch has carried medicine and equipment to measure her sugar levels wherever she goes. Unable to find a suitable and stylish bag to organize everything she needs to carry, Lynch started Type One Totes in 2015 to offer patterned bags for children to carry their diabetes supplies.

While living in Virginia, Lynch would design and make the pouches and donate them to her doctor’s office, who would then give them out to other patients dealing with Type 1 diabetes.

Lynch moved to London this year and has yet to find a place to donate the pouches, but she started a club at ASL to continue her efforts. “So far we have focussed on planning for the […] future of the club and learning the basics of sewing,” she said. “I’m really thankful for my club members for being so active and wanting to change the world of diabetes.”

Written by and Photos by Managing Editor: Online Christina Leonard