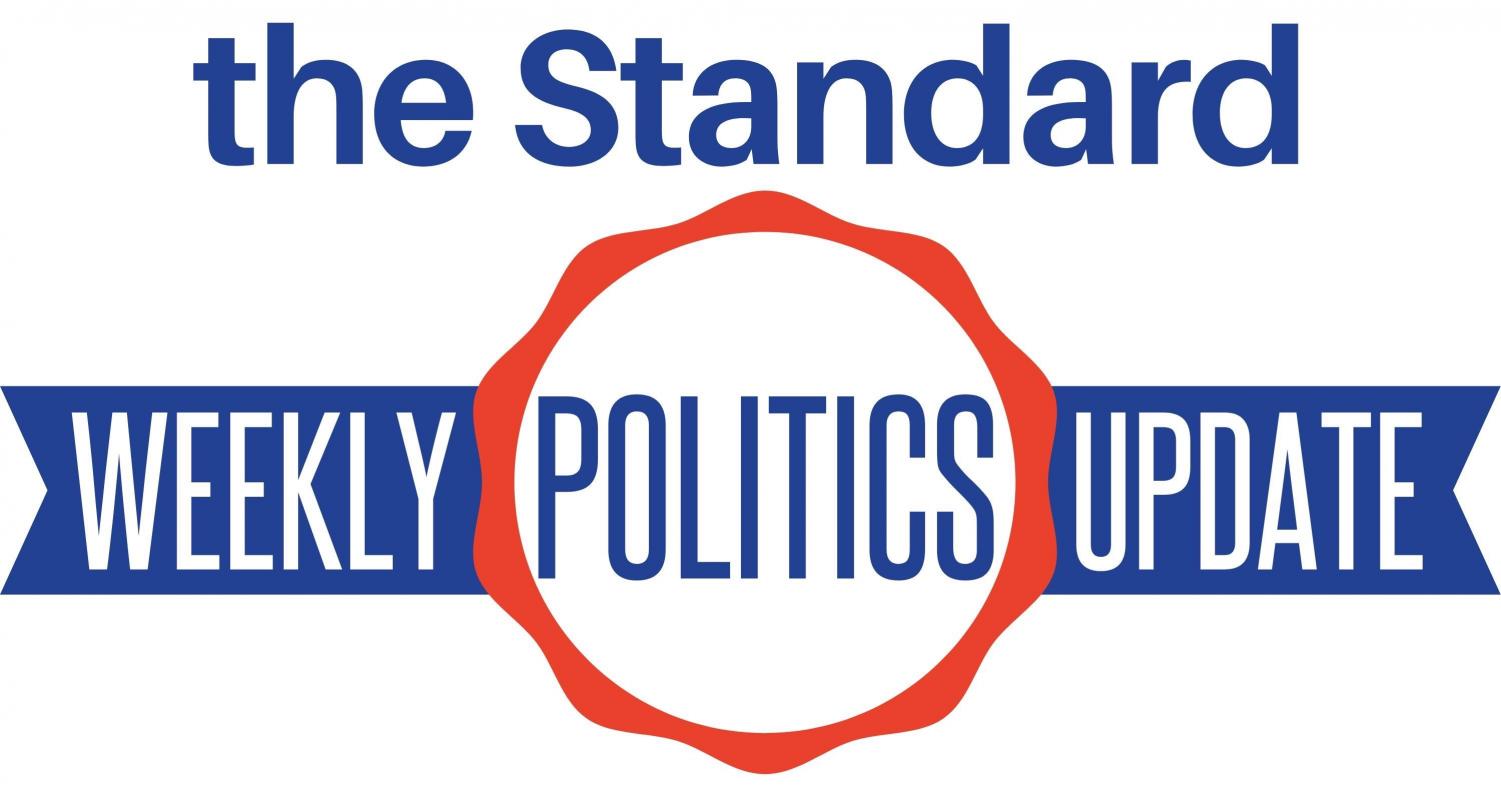 The Standard’s new Weekly Politics Update aims to inform the community on U.S. and world affairs while encouraging students to remained tuned into politics. Every Friday, News Editor Lucas Romualdo and Opinions Editor Sal Cerrell analyze the news and break down the major headlines of the week.

In just three days, Democrats in Iowa will caucus, marking the first votes cast in the 2020 Presidential Election.

As of now, the race is a tossup between Former Vice President Joe Biden and Senator Bernie Sanders (I-VT). Biden largely represents the more moderate wing of the Democratic Party, advocating incremental approaches to issues such as universal healthcare and climate change, while Sanders, a self-described socialist, supports a more radical vision for economic and social policy.

Nationally, Biden’s support comprises about 25% of Democratic Party voters, while Sanders’ includes about 20%. Senator Elizabeth Warren (D-MA), who recently won the endorsements of the Des Moines Register and The New York Times, and Former Mayor of South Bend, Indiana  Pete Buttigieg are also major candidates, though their poll numbers are at approximately 15% and 7% respectively.

The winner of the Iowa Caucuses are likely to gain a great deal of political momentum heading into the next primaries. Essentially, the winner of that election will almost certainly become the frontrunner for the Democratic nomination. As of right now, Biden and Sanders are tied in Iowa, with both Buttigieg and Warren close behind. Based on current polling, any of the four could easily win in Iowa, setting them up to win the nomination.

Recently, Sanders has experienced a polling surge that has greatly increased his chances of winning Iowa and the nomination. If he maintains or increases this level of support, he is likely to become the favorite for Democratic nomination. However, should this support subside within the next week, Biden will become more likely to win the Iowa caucuses. If this occurs, Biden is almost certain to be the nominee, making it imperative for Sanders’ campaign to score a win in Iowa.

Regardless of the nomination process, incumbent President Donald Trump remains a strong contender for reelection, with the economy strong and unemployment low. His recent trade deal with China and passage of the USMCA trade agreement may also aid him in his battle for reelection.

The trial is almost certain to end in Trump’s acquittal, as the chamber is controlled by Republicans who are unlikely to vote to remove their party’s president. Nevertheless, there are important impacts that the trial may have.

Firstly, after much debate, the Senate is almost certain to vote against hearing additional witnesses. While the vote is expected to be extremely close, swing Republican senators such as Mitt Romney (R-UT) and Lamar Alexander (R-TN) do not appear likely to break from their party. Without further witnesses, the Senate will most probably vote on the impeachment charges within a week, which, given the high two-thirds majority required to remove the president, will result in an acquittal.

An acquittal by the Senate will serve to exonerate Trump. This will especially be the case if any Senate Democrats vote in his favor, which Senators Joe Manchin (D-WV), Kyrsten Sinema (D-AZ) and Doug Jones (D-AL) may possibly choose to do. This would make Trump’s support appear bipartisan, and may solidify his case that the impeachment inquiry is a political ‘witch hunt’. An appearance of self-victimization may help Trump win independent voters in the upcoming election, increasing his likelihood of holding onto the White House.

Meanwhile, all senators are required to stay in the Senate chamber for the duration of the trial. Rules for the trial mean that they are not allowed to have electronic devices, talk, eat, or leave, which has taken a toll on some of the senators. Aside from the discomfort among the legislators, Senators Bernie Sanders (I-VT), Elizabeth Warren (D-MA), Michael Bennet (D-CO) and Amy Klobuchar (D-MN), all presidential candidates, are unable to travel to Iowa during the trial to campaign days before the caucuses. While Sanders, Warren and Klobuchar all have campaign surrogates, such as Rep. Alexandria Ocasio-Cortez (D-NY) for Sanders, campaigning in their absence, their inability to be present before a crucial state votes may harm their campaigns and benefit the non-senators in the race, especially Biden and Buttigieg.

On Jan. 28, President Trump released the details of his long-awaited Middle East peace plan, specifically concerning the Israeli-Palestinian conflict. The plan’s outline runs consistent with the Trump administrations unwavering support for Israel and it’s controversial Prime Minister, Benjamin Netenyahu, as it reaffirms both the recognition of Jerusalem as the countries capital and its current expansion of settlements in the West Bank.

Palestine would receive it’s demand for statehood, as well as a $28 billion investment package conditional on the deal’s agreement, consisting of funds largely derived from neighboring Arab countries. The new country would also be permitted to construct its own capital in East Jerusalem, to which it lays historical claim.

Geographically, the country of Palestine, under the Trump administration’s plan, would consist of small land pockets in southern Israel connected to larger blocks of territory in the west bank, of which it would control 70%. A complex series of tunnels and roads would serve to link it, including a proposed Gaza-West Bank tunnel.

This outline presents numerous points of contention, the majority of which result from the administrations omission of any palestinian representation in the drafting of the proposal. For one, the percentage of the west bank governed by palestinians is far short of that which was promised in past proposals. The Clinton Plan of 2000, which itself failed as a result of Palestinian rejection, gave the hypothetical nation all but 5% of the disputed territory. There is little chance the Palestinian Liberation Organization, now-much more extreme in ideology, would accept that.

The plan would also require the PLO to accept Israel as the state of all Jewish people, and renounce all violent activities against it. If they do not, they will be forced to leave power. These are the very principles of the current Palestinian leadership. Accepting these terms would mean a rejection of their own ideology, something they have shown absolutely no intention of doing.

Additionally, the current plan presents a host of logistical issues in the division of palestinian territory. The infrastructural requirements to connect the various pockets of territory would be extraordinary, likely costing more than proposed economic development package of $28 billion that is currently budgeted for general economic development. Connecting Gaza and the West Bank alone would require the completion of the world’s longest road tunnel ever built by nearly 50 miles, longer than the next six on the list combined. It would be so long that it would fall a little under three miles of the longest tunnel in existence, the construction of which was far simpler than the engineering required in this case.

Beyond their sheer cost and time needed for the completion of such a project, not to mention it’s feasibility in one of the harshest climates on earth, the various other roads and highways would serve as literal symbols of linkage between Israeli’s and Palestinians. Given that fact, the highways would almost certainly be targeted by factions of the PLO who want no such link to exist. As a result, the roads would require a heavy military presence thus begging the question of which country would be responsible for the guarding of each portion of the roads. This itself would be a major issue, as the proposed location of the projects regularly pass through both israeli and palestinian territory.

Nothing in the current iteration of the deal seeks to clarify this seemingly gaping lack of detail, as is the case with many of its proposals to the other key issues.

Overall, the Trump Administration’s Middle East Peace Deal holds its place as the most vague,  anti-Palestinian ever proposed by an American president. Its release will only serve to further the mutual distrust between Israel and Palestine, represents yet another failure of American diplomacy in the Middle East, and puts the two sides no closer to a peaceful end to the seemingly endless conflict.

The United Kingdom is set to officially leave the European Union today, nearly four years after the referendum’s results. It will be an unceremonious crescendo to an issue which has nearly monopolized the British political scene since July 2016 and forced the resignation of two Conservative Party leaders.

Current Prime Minister Boris Johnson will undoubtedly tout the U.K.’s exit as a major political achievement for him, as it fulfills his key pledge to the British voters in the most recent election. He has hailed the day as “the dawn of a new era” in which the country will seek to establish itself as a truly independent nation.

However, the future of the country is less than certain. Though the “official” date of exit is today (all Union Jacks will be removed from the E.U.’s headquarters in Brussels), many crucial issues of its withdrawal are yet to be resolved. Johnson will need to establish the terms of a trade agreement between Britain and Europe, something his predecessor, Theresa May, was unable to achieve. Given that the EU accounts for 45% of U.K. exports and 53% of its imports, it will be pivotal that the new terms of trade maintain this flow of goods without the addition of any new tarrifs.

This will prove to be difficult for Johnson to acquire, with the E.U. not budging on a host of concessions it demands from the U.K., which the country must fulfill in order to retain its tariff-free access to the European market.

President Emmanuel Macron of France, the biggest country in the EU, has long pushed for the current hardline position it holds. Given the growth of anti-EU sentiment in member states, Macron wants to make its departure an exceedingly difficult process for the U.K., which would discourage any additional defections.

Britain still has a ways to go before the use of the term “Brexit” is a thing of the past.

British Labour Party Leader Jeremy Corbyn resigned last year after leading his party to its worst election result in nearly a century. Four candidates, each with varying messages and backgrounds, have entered the race to replace him. The candidates are Keir Starmer, the Shadow Brexit Secretary, Rebecca Long-Bailey, the Shadow Business Secretary, Lisa Nandy, a backbench Member of Parliament, and Shadow First Secretary Emily Thornberry.

Starmer is widely viewed as the frontrunner in the race, and has already secured the backing of 40% of his fellow MPs, more than all of his opponents’ endorsements combined. As perhaps the only moderate running, his poll numbers far outstrip his competitors’, indicating a strong likelihood that he will emerge as the next Labour Leader.

Meanwhile, Long-Bailey is largely seen as Corbyn’s preferred successor as a more radical, left-wing politician. While this has garnered her crucial support in the early stages of the election, it is unclear how much this will help her, given that Corbyn’s ideology has delivered Labour’s worst election result in decades. Long-Bailey has also been accused of violating Labour’s campaign rules, though the party (led by her backers) declined to penalize her for these alleged infractions.

Regardless of who becomes the next Labour leader, it is unclear where the party’s future lies: in the recent election, Conservatives not only won their usual rural seats in England, but also made inroads into major industrial urban areas that have been traditionally Labour strongholds. If Labour continues to lose ground in these regions, they will have to increase their vote share among rural Britons, which their current platform, which is socially and economically progressive, is unlikely to do. As such, Labour must formulate a strategy to increase their electability, or they may face many more years out of power, essentially politically irrelevant after the Conservatives’ recent domination.