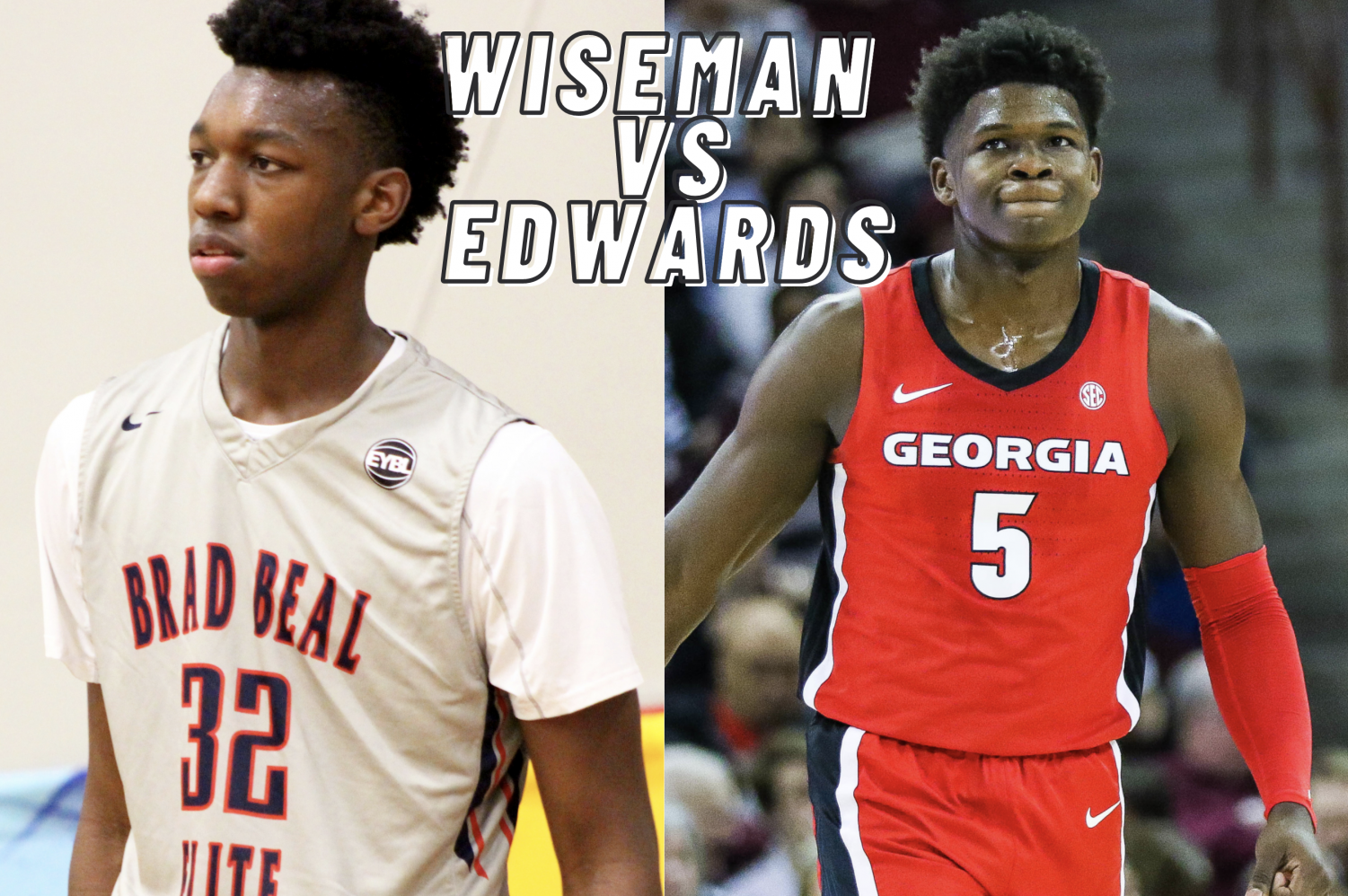 James Wiseman and Anthony Edwards were the second and first picks in the 2020 NBA draft Nov 18. Staff Writers Ruhan Bhasin and Lucas Tchelikidi debate which of the two players was the best pick of the draft. (Photos used with permission from Katie Dugan/Creative Commons and The Hoosier/Creative Commons)

James Wiseman and Anthony Edwards were the second and first picks in the 2020 NBA draft Nov 18. Staff Writers Ruhan Bhasin and Lucas Tchelikidi debate which of the two players was the best pick of the draft.

Point Counterpoint: Who will be the best player in the NBA draft – James Wiseman or Anthony Edwards?

With the second pick in the 2020 NBA draft, the Golden State Warriors selected James Wiseman from the University of Memphis, rightfully so.

Last season, the Warriors were a shadow of their former selves, ending the pandemic-shortened 2019-20 season with a record of 15 wins and 50 losses. Their primary problem was injuries, with all-star shooting guard Klay Thompson tearing his ACL in their 2019 finals campaign against the Toronto Raptors, and two time league MVP Stephen Curry injuring his hand in the beginning of the season.

As a result, the Warriors were the worst team in the NBA, landing them with the second pick.

Wiseman was the best player in the country coming out of high school. According to ESPN rankings, athletically, he is one in a million.

His physicality is one of his most dominating strengths. According to NBADraft.net, he stands at about 7’1, 235 pounds, with a 7’6 wingspan. This towering physical frame gives him a great foundation to develop skills as a defensive player, where his long wingspan will help him block shots.

As an offensive player, his huge stature will help him back down defenders in the post. However, his size doesn’t hamper him from running up and down the court, as he is a very fluid athlete with or without the ball, and can run on the fastbreak with ease, to score points quickly. He also displays an ability to shoot from the mid-range area, something many centers in the NBA don’t have, potentially extending past the three-point line.

Nonetheless, Wiseman is not without his weaknesses. He wasn’t projected to be a good playmaker at center, averaging 0.7 assists in his three games in Memphis in November 2019. While he has all the tools to be an elite defender, his fundamentals and footwork could improve.

Even though Wiseman was the number one prospect in the country out of high school, he only played three games in college, which some may argue isn’t enough to gauge his strengths and weaknesses and how they will translate to the NBA. However, some of the best players of all time didn’t even go to college, such as four time NBA MVP Lebron James, 18 time All-Star and two time scoring leader Kobe Bryant, and three time Defensive Player of the Year Dwight Howard, among others. It’s safe to say that success is not always determined by college experience.

Wiseman was the best player in the country coming out of high school. Athletically, he is one in a million. ”

Given his potential, the way he fits in on the Golden State Warriors should aid his development greatly. First of all, he has been placed in the perfect position to develop. He will now be working closely with two of the greatest shooters of all time, Stephen Curry and Klay Thompson. I would be very surprised if he didn’t, at the very least, become a knockdown mid-range shooter, given the tools at his disposal.

Likewise, he will be playing next to the 2017 Defensive Player of the Year Draymond Green, one of the best defenders in the modern NBA. Given that Wiseman has been paired with Draymond and is far more physically gifted than Green, he should develop into a great shot blocker and improve his defensive IQ.

Because of this logic, some may argue that because Golden State doesn’t have any elite passers on their roster, Wiseman won’t become a better passer.

It’s true that the Warriors don’t have an elite playmaker who averages 10+ assists per game, but they don’t need that. According to NBA.com, from 2015 to 2019 the Warriors led the NBA in points created off of assists, where most of the points they gained were scored on assisted shots rather than self-created shots. Considering that, at that time, they didn’t have a player who was top five in assists, their system emphasizes ball movement. To adjust, Wiseman will need to learn to move the ball, and make the extra pass to ensure their system runs smoothly and seamlessly.

Wiseman has been put in a position some can only dream about. He gets to play on a team that was a championship contender a year ago, and a team that fits him perfectly. It’s up to him to use those tools.

Wiseman will be the best pick for the Warriors, and the best player in the draft because the Warriors are in a position to win now, rather than have to rebuild the team. They need players who work well in the way their roster, and he fills a position archetype that the Golden State Warriors have never had the opportunity to have, and that fits them perfectly. The best center the Warriors have ever had was number one pick in the NBA draft Andrew Bogut, and while Bogut was not bad for them, Wiseman has a different skill set.

Golden State, as mentioned above, have two of the greatest three point shooters of all time on their roster, so teams that guard against them will put a lot of pressure on the three point line. Now they have a reliable option that the team can trust when he is near the basket, in Wiseman, when there is too much pressure on the perimeter, making them able to score consistently from everywhere.

Wiseman’s ability to take pressure off of Stephen Curry and Klay Thompson makes him a perfect player for the Warriors, and the tools around him he has to develop will make him the best player in the draft, both right now and in the foreseeable future.

Coming out of high school, Anthony Edwards was considered the fourth-best prospect in the draft according to ESPN rankings. However, on the evening of the 2020 NBA draft, he was the first overall pick by the Minnesota Timberwolves.

This was no surprise since Edwards can fill the holes that the Timberwolves have in their roster, and be another franchise player after the Wolves’ lackluster 28th out of 30 finish overall last season.

This season was not an outlier, however, with the Timberwolves being all-around poor these last few years. The star-studded rosters they’ve had throughout the last five years depleted when players such as Zach Lavine and Jimmy Butler left, and so it’s safe to say that the team, and their management, has underperformed in keeping their best players and being consistent on the court.

Although the Timberwolves haven’t been able to go far in, or even make it to, the playoffs, Anthony Edwards and the newly acquired D’Angelo Russell will be the missing links in their already decently strong core roster, and could push them towards success in the NBA and a deep run in the playoffs.

Edwards can fill the holes that the Timberwolves have in their roster, and be another franchise player after the Wolves’ lackluster 28th out of 30 finish overall last season. ”

Considering the NBA team already has two past All-Stars in Karl Anthony-Towns and the previously mentioned D’Angelo Russell, Edwards has players that can uplift his game, and give him the confidence to perform well in the NBA. According to Tankathon, Edwards, who is 6’5, has a wingspan of 6’9 and a weight of 225 pounds, making him a quality height for a shooting guard. This means that he has an anomalous athletic physique, similar to the likes of Russell Westbrook, a dominant guard who is known for his athleticism.

One of the main things the rookie could improve for the Timberwolves is their defensive side, with lineups.com ranking the team 28th overall in points allowed during the 2019-20 season. ESPN describes Edwards as a “lockdown defender who can check three positions at the NBA level,” demonstrating what an impact he could have on the franchise.

Not only a defensive threat, Edwards also demonstrates strength in his offensive game, and is considered a comfortable three-level scorer by many, meaning that he can score from the three-point line, midcourt, and in the paint. His offensive character and versatility makes him an incredibly difficult player to guard.

Although some might criticize Edward’s overall shot IQ and potential lack of work ethic on defense, there is no doubt that Edwards will also bring confidence and charisma to a team that needs results to uplift spirits in Minnesota. ”

In addition, Edwards showed his clear leadership through his performance for the University of Georgia Bulldogs this past season, netting just over 19 points per game and five rebounds according to sports-reference. He was the bright flame in an overall underwhelming team, who finished with a record of 16 wins to 16 losses and an average of just under 76 points per game.

Although some might criticize Edward’s overall shot IQ and potential lack of work ethic on defense, there is no doubt that Edwards will also bring confidence and charisma to a team that needs results to uplift spirits in Minnesota.

The Timberwolves’ already strong roster means that their players can offer Edwards guidance as he starts out the season. For example, Ricky Rubio, who is a newly acquired player from the Phoenix Suns, is a career 7.8 assists per game player, and is someone Anthony Edwards can learn from. Considering that ESPN states that Edward’s “decision-making is a work in progress,” Rubio can mentor him to improve that part of his game and help him grow to be a better NBA player.

If the Timberwolves manage to remain healthy and are able to play their own game, there is no doubt that they can go far in the playoffs this season.

In essence, Edwards will be the best player picked in the 2020 NBA draft due to his previously mentioned all-around talent, from his ability to attack as a three-level scorer, to his lock-down defense around the perimeter. Edwards is a coach’s dream in that he can and will do anything to help his team. He will thrive in the Minnesota system, and be the rookie of the year. Considering his hard work and unlimited potential, there’s no doubt in my mind that he will be a star.

A full list of the 2020 NBA draft picks can be found here.