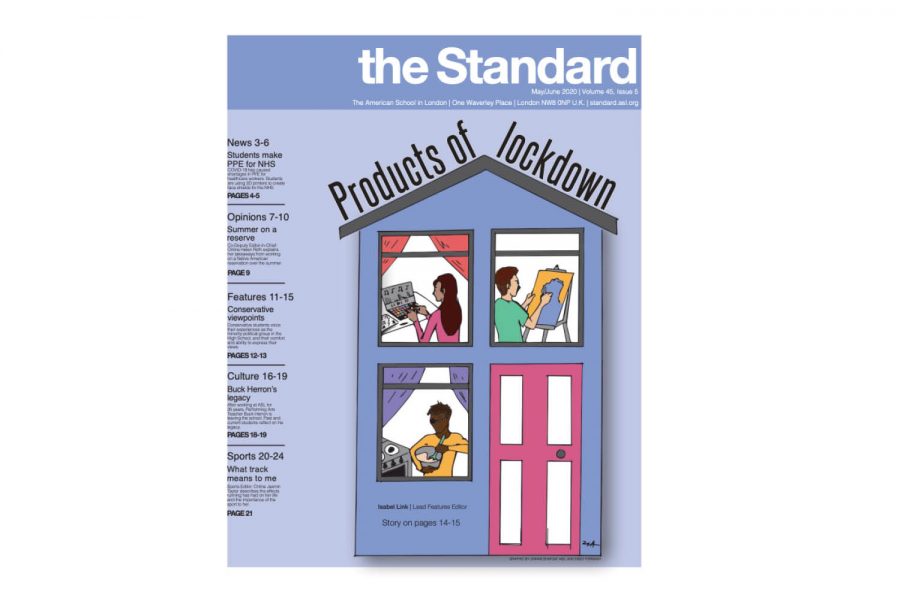 With more time to be spent inside, certain students working on skills that range from rapping to baking to drawing. Some began their hobbies prior to lockdown, while others are using this time to experiment and try something new.

“It’s not a diamond in the rough, but, you know, the rough in the diamond,” Rohit Venuturupalli (’21) said of his upcoming album “St. Johns Hood,” which he has been writing songs for since March.

In the past two and a half years, Venuturupalli said he has gained some experience performing raps at summer camps and Late Cafes.

“I would go and I’d rap something, not by me but by Eminem, or my favorite thing to do was to rap a Dr. Seuss song because they actually come out pretty nice,” he said.

Now that he has more time, Venuturupalli said he is working on his own music. He said some of his musical inspirations, or “rap heroes,” include Tupac, Biggie Smalls, Lil Wayne and Childish Gambino.

“I like a lot of rap. I have a lot of inspiration,” Venuturupalli said. “But I really just started this because I wanted to start creating myself.”

Even though Venuturupalli said he plans to publish his finished body of work on Spotify by the end of the year, he is not pursuing a future in rap.

“It’s just really about having a good time,” he said. “That’s what it is at the end of the day. I’m not taking this super seriously where I want to start going professional and making money.”

Additionally, Venuturupalli said he and other Grade 11 students are collaborating on a few new tracks, which will likely be included in the album.

He said some of his friends contribute lyrics, while others provide beats so that he does not have to buy them off of a platform like YouTube or use them from another creator on SoundCloud.

With Zoom classes, homework and end–of–year projects Venuturupalli said he uses rap as a way to take a step back from academic subjects.

“As someone who’s not very creative, as someone who’s really into math and science, this is a great outlet for me to really explore something I’ve never had the time to explore and really pursue,” he said.

Since lockdown started, Ellie Lowe (’22) said she has attempted to learn how to bake chocolate fondant, chocolate croissants and Victoria sponge cake.

“I was baking a little bit before quarantine … but since lockdown started, the baking has grown a lot,” Lowe said.

Although she has had many successes, trying new recipes has not come without mistakes. Yet, she said she is happy with what she has made so far.

“The Victoria Sponge was a little bit overcooked because you’re supposed to bake it in two tins of the same size, but I only had one,” Lowe said. “So, I had to bake it for longer and it was overcooked, but it was still good.”

At the same time, there have been some positive outcomes of experimentation, and Lowe said she has found some staple recipes which she will continue to make even after the lockdown is over.

“My favorite recipe is the chocolate fondant, and I’ve made it three times now because it’s really good,” she said.

Oftentimes, it is only her in the kitchen when she is baking. However,  she said her brother “helps when he wants to.”

Prior to lockdown, Lowe said she subscribed to a number of baking channels on YouTube, such as the Korean account Cooking Tree, although did not often try recipes herself.

Now, Lowe uses baking as a time to get away from school work and looking at her computer.

“It’s a pastime because just staring at my screen is exhausting,” she said.

Although Kleidi Likola (’21) said she has always been interested in art, she first began experimenting with digital drawing last summer. Now,  in lockdown, she has taken it up again.

“It was actually the first week of lockdown,” she said. “I looked at my iPad and I was like, ‘Why not? Let’s just go do it.’ I have so much time now, well, when I’m not studying.”

Additionally, Likola said she had not predicted spending so much time drawing at this point in the year. However, in accordance with the government-mandated orders to stay home, she has more time to practice.

“If there wasn’t a lockdown, I would have been out with friends” she said. “So, it really has given me that extra time to kind of realize that this is something I like to do.”

Likola remembers the first time she considered doing digital illustration when it came up on her Instagram explore page.

“I just saw different forms of art and was really inspired by those creators on Instagram,” she said. “I’d just seen a couple random ones, kind of went from there, and tried it out for myself, and I realized I actually really liked it.”

To begin with, Likola said she used the app ClipStudioArt, downloading it on her computer and iPad, but now she uses ProCreate on both devices.

Using the app, Likola can trace the outline of figures in images and then add color and shading where she wants with different tools.

“It’s kind of really difficult for me at the moment, so … I’m doing outlines of people, like of photos,” Likola said. “I have a couple of drawings I’ve done of celebrities or some of my friends.”

Although Likola primarily draws using an app now, she said there are both positives and negatives of drawing on paper and online.

“I’ve always liked drawing, like on paper, but what I like about digital art is that it’s easy to go back and fix mistakes,” she said. “It is a lot more difficult in terms of shading because on paper you have your finger, you can manipulate it the way you want.”

As she spends more time drawing, Likola said her goal is to be able to free–draw as opposed to relying on the outlining feature.

“Hopefully, in the future, I’ll be able to start drawing without outlines and without maybe references,” she said. “But we’ll get there slowly.”

Right now, Likola said she is trying new things, but she may explore other kinds of art in the future.

“Hopefully, it will be something I can continue to do,” she said. “With the work that I’m doing, maybe I’d be able to make comics in the future or do some fun stuff with it and see where it kind of takes me. I’m kind of just having fun with it at the moment.”