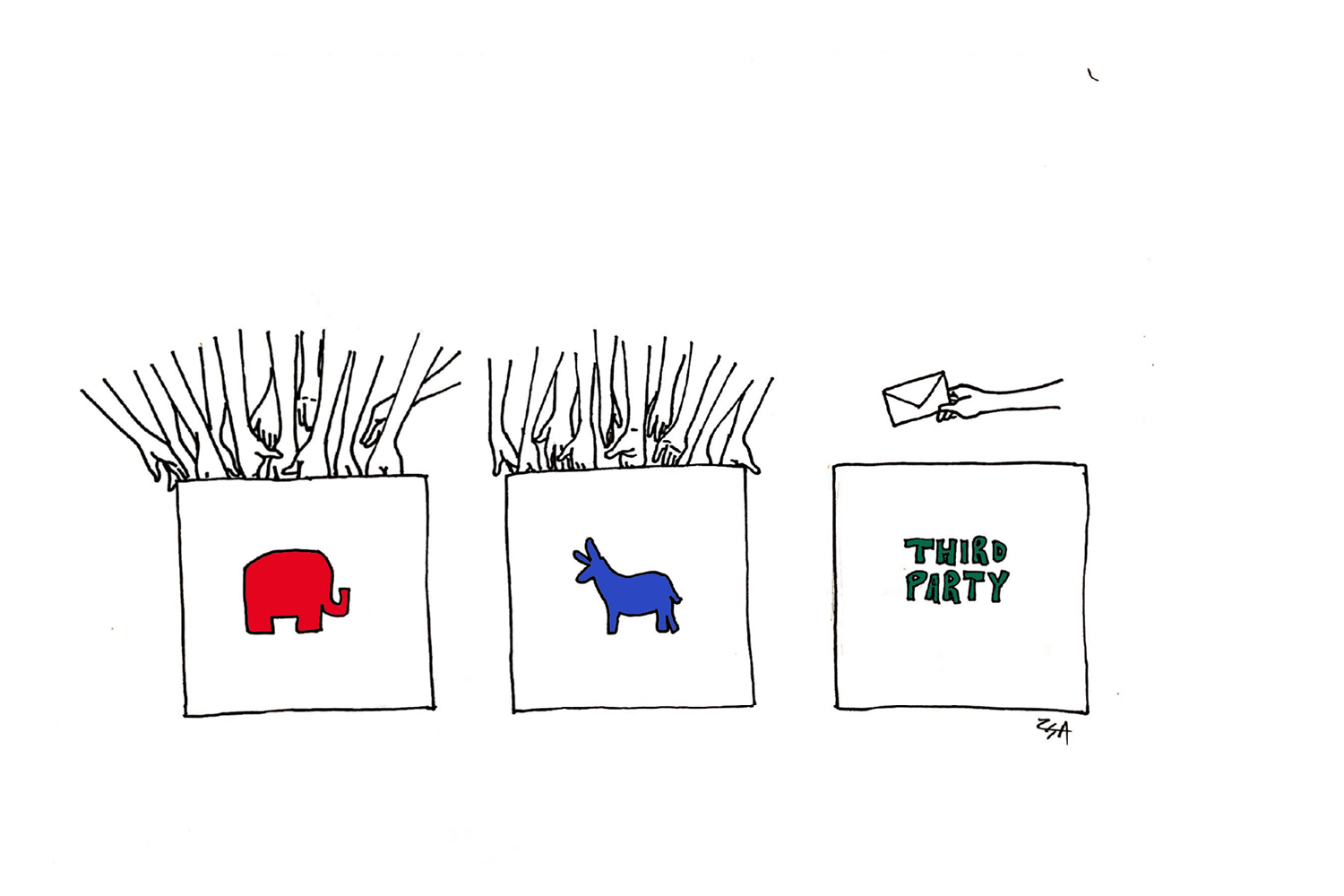 Third party voting gives undeserved influence to candidates who have little to know chance of winning the election.

The facade of third-party protest voting

Nov. 3 is fast approaching. Voters will head to the polls grappling with which candidate will be the better choice to lead the U.S. through a myriad of challenges; handling the COVID-19 pandemic, racism and the economic crisis. Who becomes president matters for everyone. That is why voters need to vote for the candidate that best suits their values, and realize how important their vote is.

Over the past couple of months, I have heard the idea of “protest voting” come up as the election approaches. People who engage in this idea are usually not excited about either of the two major political party candidates instead vote for a third-party to demonstrate their discontent.

However, protest voting is irresponsible because citizens should be casting their ballot for the candidate they believe most. The democratic privilege of voting granted by the constitution is sacred and voting for a third-party candidate or writing in candidates is a waste of that sacred right.

People may justify this behavior by arguing that their vote for a third-party candidate doesn’t matter and will not ultimately influence the outcome of the election. This could not be further from the truth. Despite the fact that the modern two-party system in the U.S. makes it increasingly tough for third-party candidates to win a single electoral vote, let alone presidential elections, voting third party, especially in a very close election, can influence the outcome.

In history, there have only been four third party candidates to have ever won a single electoral vote: Robert La Follette in 1924, Strom Thurmond in 1948, George Wallace in 1968 and John Hospers in 1972.

However, in the past two decades third-party candidates add pressure to presidential elections, and while these candidates never win and usually only accumulate a small percentage of the overall vote, they have been blamed for altering the outcome of elections.

The democratic privilege of voting granted by the constitution is sacred and voting for a third-party candidate or writing in candidates is a waste of that sacred right.”

The election between former Democratic nominee Al Gore and former Republican nominee George W. Bush was extremely close and controversial. Although Gore won the popular vote by more than half a million votes, he lost to Bush in the electoral college. It took 36 days for the outcome of the election to be determined, and all came down to a nail-biting 5-4 Supreme Court ruling.

Green Party nominee Ralph Nader was in part blamed for Gore’s ultimate loss. While Nader won less than 3% of the popular vote and only received 2.9 million votes in total, Nader is said to have influenced Bush’s victory. The tight election all came down to the swing-state of Florida. Bush scarcely won Florida with less than 600 votes in his favor, which gave him the electoral edge over Gore by a 271-to-266 difference.

In Florida, Nader had won around 100,000 votes. The votes that had gone to Nader would have established a clearer winner in Florida and the country would have not needed the Supreme Court to decide the outcome of the election. Florida aside, in New Hampshire, Nader accumulated 22,000 votes, which was three times the size of Bush’s margin of victory in that state. Thus, to claim that third-party candidates do not make an impact is ludicrous.

Four years later, while there were people who strongly supported former Democratic nominee Hilary Clinton and people on the other side of the spectrum who were staunch Donald Trump supporters, many disapproved of both candidates. This caused Americans to turn to third party candidates as alternatives and cast “protest votes.”

Former New Mexico Governor Gary Johnson collected nearly 4.5 million votes, which accounted for over 3% of the popular vote. In theory, that number may not seem significant, however, Johnson’s 4.5 million votes were a million more than the total by which Clinton won the popular vote. Furthermore, Johnson’s performance was the best third-party candidate performance since Ross Perot in 1992.

Moreover, Massachusetts physician and Green Party nominee Jill Stein ran for her second consecutive presidential election in 2016 and earned just under 1.5 million votes which were 1.1% of the total vote. This made Stein the first fourth-place finisher to break through the one-million-vote mark since 1948.

The impact of the third-party candidates on the 2016 election was less clear when compared to the 2000 election. However, according to some political analysts, third-party candidates aided Trump’s victory by pointing at states where Stein’s vote total surpassed Trump’s margin of victory: Michigan, Pennsylvania and Wisconsin. Analysts claimed that if Stein’s and Johnson’s votes in those states had gone to Clinton she would have been president. However, it is important to acknowledge that many Johnson supporters may have voted for Trump as their second choice.

This is crucial because Clinton won the popular vote by 3.5 million and Trump won the electoral college – in some states by small margins. Having a more decisive win is important for the country to move on past the election with a sense that there is a clear, fair winner.

Third-party candidates are important for the democratic process. Voting third-party is legitimate and fair if you are aligned and care about the policies and issues you think they represent.

However, voting for third party candidates solely in spite of the other candidates is unjustifiable. Your vote matters and makes an impact especially in a close election, don’t abuse it.