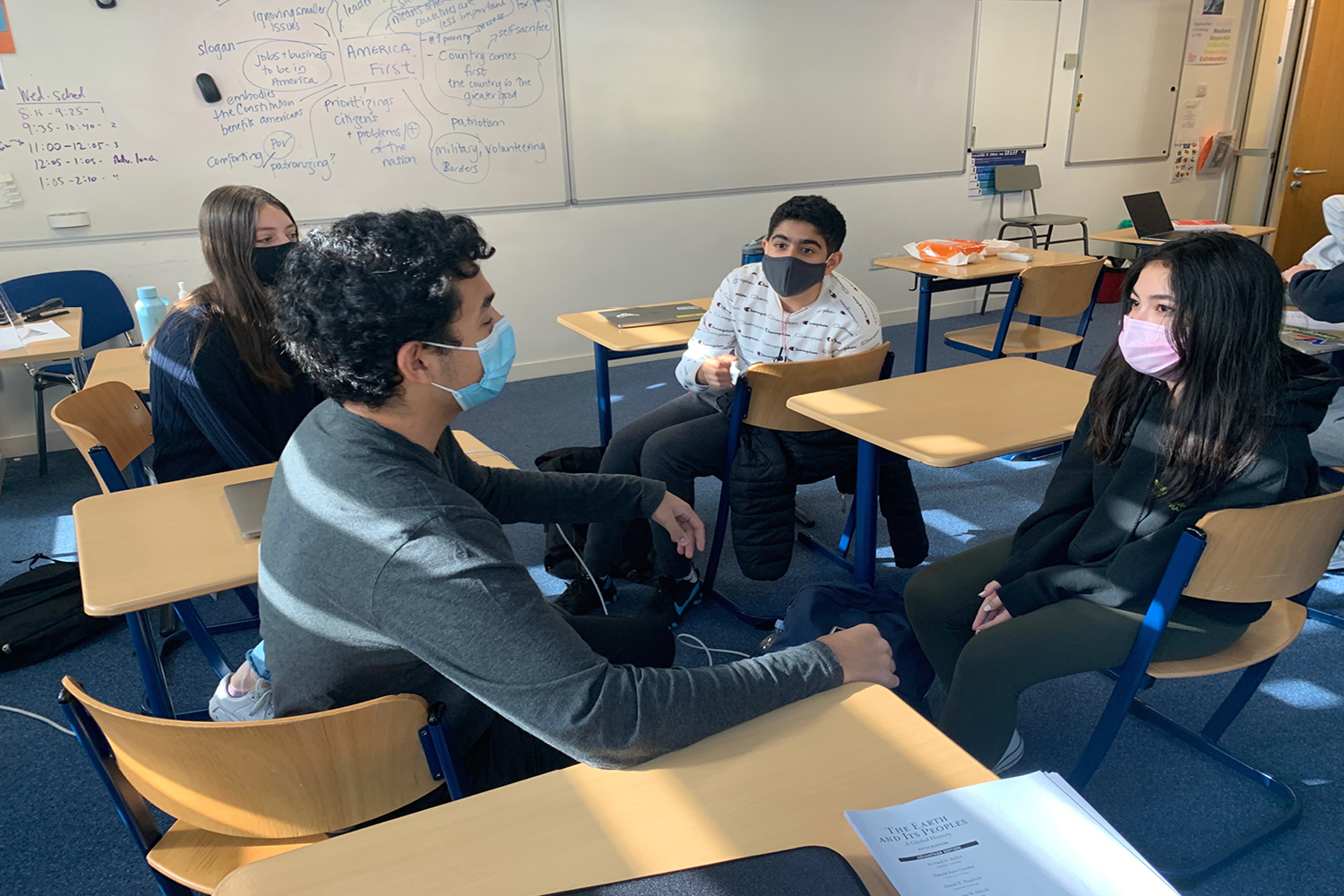 For Samih Sawiris (‘23), the urge to engage in discourse regarding the 2020 election poses a fundamental question: How educated are students on the upcoming election, and where are they getting their knowledge from?

As the election gets closer, conversations surrounding it have been increasing throughout the High School.

Sawiris said students tend to gain most of their understanding of the election from social media and what they hear at home, but said that these resources are, in many cases, not beneficial.

“Although social media is a great way for students to acquire some information on the topic, some sources can be incredibly biased or one-sided and this won’t help students get a full understanding,” he said.

Social Studies Teacher Christin Putnam said she is noticing an increase in students’ curiosity on the topic.

Classes should look at politics through more of a neutral lens”

“Many of the students at ASL are highly interested and are following the election in the United States as it is coming up so soon and is something that is repeatedly talked about in the news,” she said.

Similarly, Emma Symonds (‘23) said students are educated in certain current events because of their interest regarding global issues. However, she does not think that this is a result of the school’s encouragement.

“Our generation is very passionate about social issues going on in the world, as there’s so much that connects to everyone in a certain way,” she said.

As the election draws nearer, students have been engaging in discussions regarding the candidates, debates and more.

“Most conversations are good because they widen students’ perspective of the topic being discussed,” Sawiris said.

However, Sawiris said at times, these discussions aren’t respectful and can be damaging.

“If a person has their own strong opinion that another might not share, these discussions can be destructive,” he said. “I try to stay out of these sorts of discussions just so I can avoid any issues.”

Putnam said she noticed a variety of different discussions take place during her in-class breaks; some are more thoughtful and constructed discussions, while others are more like debates.

“Sometimes students find the dialogue of debating a fun way to engage in politics, and I’ve found these debates to be generally quite respectful,” she said.

On the other hand, Symonds said during discussions she listened to, students expressed opinions that were not based on a complete understanding of the topics at hand.

“I noticed a lot of students discussing the first debate between Biden and Trump,” she said. “Students tend to just generate their opinions based on what they hear from the people.”

Though Putnam said some social studies classes have discussed the election, Symonds and Sawiris both said that there has not been enough coverage of it in classes.

Sawiris said he did not notice any in-class coverage concerning how the election works.

“Sure, there have been discussions between students, but we’ve never taken class time to analyze the debates with our teachers or learn more about how the election works or the basis of American politics,” he said.

However, Putnam said how much the election is covered depends on the subject of certain classes, and she is happy to talk about it with other students before class or during breaks.

Putnam also said that there is an upcoming symposium that the social studies department has been working on, which will involve different schools and centers around the U.S. presidential election.

Yet, Symonds said the school does not widely cover the election because they want to maintain political correctness.

“Our school is mainly a very liberal community, which I respect, but I think we avoid certain important aspects of the topic,” she said.

In addition, Symonds said coverage regarding the election does not have to consist of overt political beliefs, but rather background information.

“We don’t always have to speak about opinions, she said. “Classes should look at politics through more of a neutral lens.”

Symonds also said that reading articles that include various perspectives can help deepen one’s understanding of a topic.

“Students should subscribe to a variety of newspapers so that they are also updated on what’s going on and can acquire an understanding of both perspectives,” she said.