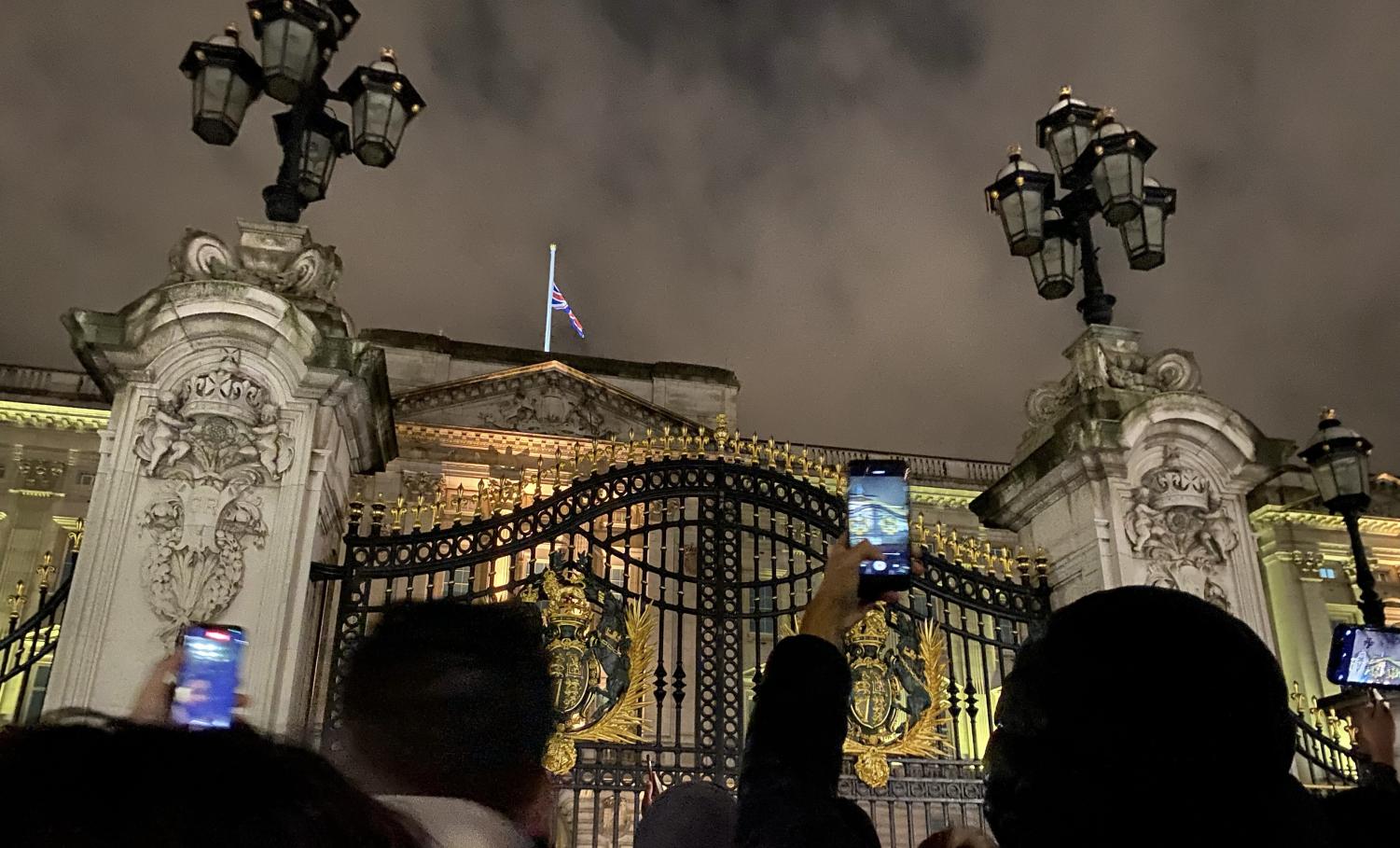 Two hours after the public announcement of the Queen’s death Sept. 8, crowds gather in front of Buckingham Palace backdropped by a flag lowered to half-mast. The official notice from the Royal administration consisted of two sentences posted on the gates as a double rainbow framed the Palace. (Anna Reznick)

Two hours after the public announcement of the Queen’s death Sept. 8, crowds gather in front of Buckingham Palace backdropped by a flag lowered to half-mast. The official notice from the Royal administration consisted of two sentences posted on the gates as a double rainbow framed the Palace.

As a child, Assistant Principal Natalie Jaworski said she viewed England as a “magical place.” Jaworski’s perception of the country was largely shaped by stories of Queen Elizabeth II’s reign that were passed down from her grandmother, a London resident who lived through World War II until 1947. Jaworski said she still carries a pin from the Queen’s Coronation in 1953, which was initially in the possession of her grandmother. This week, Jaworski held the same emblem in mourning.

After 70 years on the throne, Queen Elizabeth II passed away Sept. 8 at Balmoral Castle in Scotland, per the BBC. Her death marks a turning point for many across the U.K., eliciting a wave of emotion as the country enters a new era of royal rule.

Jaworski said the death of Queen Elizabeth II symbolizes a “connection to history” that has been “severed.”

A London resident of several years, Library Administrative Assistant Steve Reed said he followed news outlets throughout the day after learning of the Queen’s ill condition. When the news of her death arrived in the evening, Reed said he was saddened but unsurprised.

“We were watching the news periodically, checking the news to see what was happening,” he said. “She lived a very long life, longer than probably most of us will live, and she was a remarkable leader.”

“She has a family behind her who have lost someone that has been there for centuries,” he said. “Just take that minute and think about our own families and grandmothers in that sense as well, because that’s what she meant to quite a few of her family members.”

World Languages and Culture Teacher Victoria Hamadache, a British citizen, said although she had anticipated the Queen’s death, she was disheartened by the news of her passing.

“I was extremely upset,” she said. “I’m fully aware of the fact that she was 96 years of age, but it upset me because we weren’t particularly prepared in the run-up.”

“She reigned Britain for so long, which made her a part of my life,” he said. “She was a comforting figure in times of crisis. It was a big blow to me when I found out she died.”

Jaworski said the Queen’s death spurs collective reflection and forces the country to grapple with “losing someone that’s been there [their] entire life.” 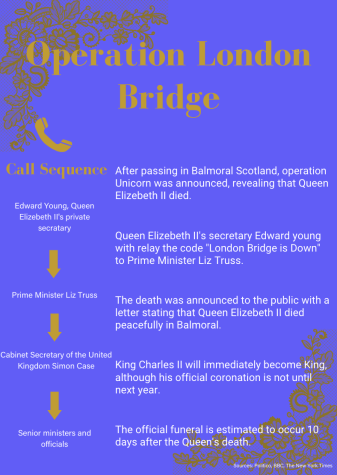 Although King Charles III stepped into the role of reigning monarch immediately after the Queen’s death, his coronation will likely occur in the spring, according to the Guardian.

Reed said he believes King Charles III will rapidly alter the monarchy based on his visions expressed in the past.

“With each new successive generation, there’s a degree of modernizing that goes on,” he said.

“I don’t know, had the Queen lived on, that she would have been able to have any particular impact,” she said. “I feel that King Charles III might possibly want to get involved in this financial debacle.”

In addition, Hamadache said she anticipates the leadership of King Charles III will bring changes to the economic aspect of the monarchy.

“I’m foreseeing in the future a massive reduction of the royal family and in the money that they receive for their duties,” she said.

Sam Singer (’23), who has lived in the U.K. since birth, said the public may have difficulty accepting a new monarch after the Queen’s long-standing reign.

“People have been quite latched onto Elizabeth and are really going to latch onto what her legacy was,” he said. “I think it will be really hard to transition.”

Dhanani said the Queen’s death serves as a reminder of individual sources of stability alongside unity as a country.

“It’s a chance for all of us who kind of just take that minute and think about our own families and grandmothers,” he said. “That’s what she was to quite a few of her family members.”

Singer said although some are “struggling to let go,” others are “wanting to look toward the future.”

Before acknowledging King Charles III as the new figurehead for the monarchy, Hamadache said she hopes the event serves as a moment of reflection and unites the English people.

“I’m hoping that people will come together,” she said, “in celebration of a wonderful life well lived and acknowledge her service to our country.”